Woking held to a draw against 10-man Halifax Town

Woking had to settle for a point against 10-man Halifax Town after Nathan Clarke was shown a straight red card for the visitors.

It was a cold and rather gloomy afternoon at the Laithwaite with a very strong contingent of Cards fans in the crowd of 2,242, as they took on third place Halifax who had started the season very strongly.

The Cards were unchanged from their 3-1 victory away at Stockport which was their first win since August.

Both teams had not played for two weeks after being eliminated from the FA Cup before the first round and it was the away side who settled the quicker of the two teams. They began to knock the ball around confidently and a nice bit of play required Moussa Diarra to be alert and clear the danger for the Cards.

Woking grew into the game and had a mad couple of minutes in which they could have taken the lead. In the 20th minute Josh Casey had a corner which looked goal-bound; however, Halifax stopper Sam Johnson was able to clear it away before defender deflected the ball just past his own post. 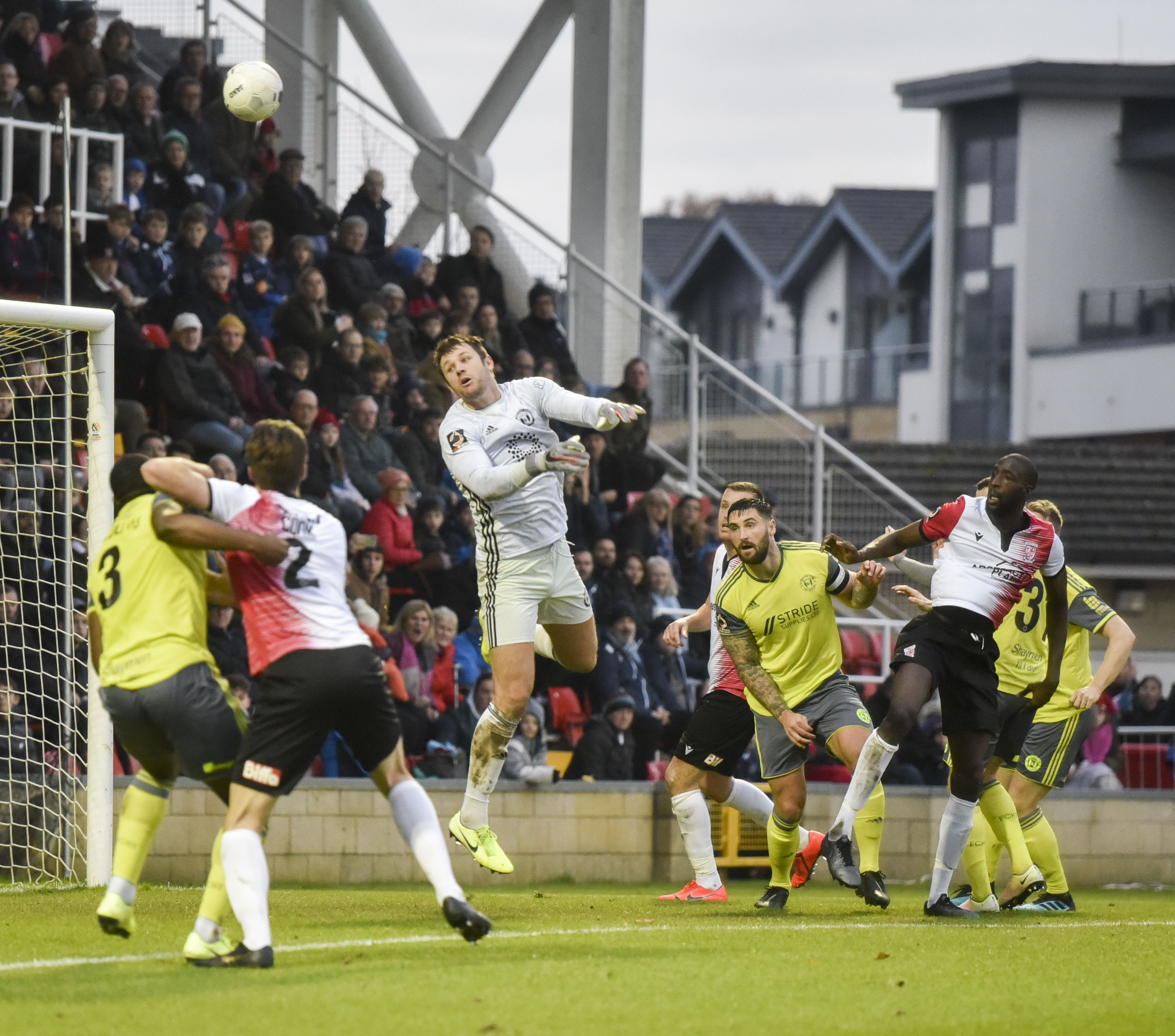 Woking continued to come forward this time in Dave Tarpey. He collected the ball on the right-hand side produced a lovely bit of skill to beat the left back Jerome Binnon-Williams before fizzing a shot past the goalkeeper’s far post.

Halifax were struggling to find any end product. Some nice bits of play got them into threatening positions but shots from MacDonald and Sho-Silva respectively went flying over the crossbar.

The last bit of drama came just before half time. A poor Josh Casey free kick looked comfortable enough for Johnstone, but the goalkeeper dropped it causing a melee and Halifax were just about able to get it away.

Woking started the brighter of the two teams in the second half but chances were at a minimum. Woking attacked well but a very well drilled Halifax side kept them at arm’s length.

In the 65th minute the game took a turn. Halifax defender Nathan Clarke made a horrific two footed studs up challenge on Shaun Donnellan and was given a straight red card meaning it was a change in game plan for the away side.

But Woking really struggled to make the man advantage count. Max Kretzschmar who replaced Donnellan after that challenge had a shot saved by Johnstone before Ben Gerring saw his header denied a minute later.

In the 75th minute Jamar Loza was through on goal but his shot was gathered by the goalkeeper quite easily.

Halifax defended resolutely and their captain Matty Brown put in a perfect performance, clearing every cross and putting in vital tackles to hold onto a point.

Six minutes of added time came around because of the treatment to Donnellan and that brought Woking’s best chance. A corner came in and Jack Cook rose highest, it looked like his header was about to make the net ripple but Johnstone did excellently to tip it over the crossbar and secure his team a point.

A poor game in truth and Woking will be bitterly disappointed that they failed to score after playing around 30 minutes against 10 men. Credit must be given to Halifax who defended very well but Woking will be kicking themselves even more as the visitors failed to register a shot on target.

The point sees Woking remain in 8th and are only five points off top after Bromley were held to a draw against Harrogate. They will look to get back to winning ways in front of the BT Sport cameras away at Maidenhead next week.