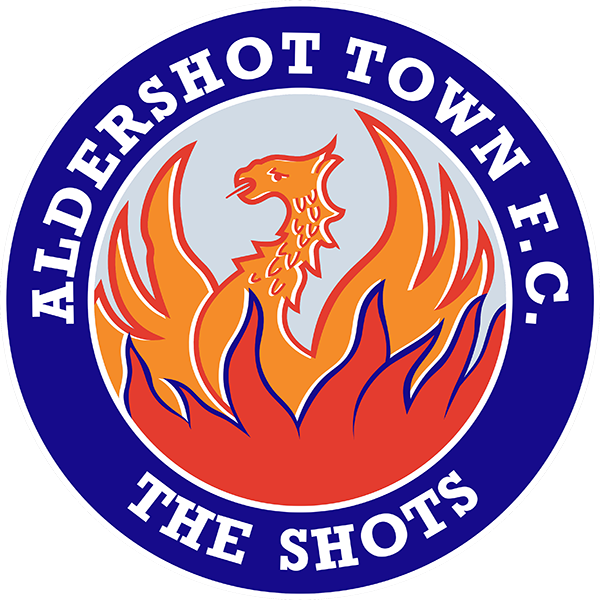 Cards looking to make it derby double in Hampshire

After ending a near five-year wait for victory at Aldershot back in October, the Cards will look to make it back-to-back wins away to their local rivals on Boxing Day, as they make the short trip to Hampshire for the first-part of a festive season double header.

Alan Dowsonâ€™s side chalked up successive wins with victory at home to Dover Athletic last Saturday, as goals from Charlie Cooper and Slavi Spasov saw the Cards come from behind to book their place in the fourth round of the FA Trophy. The Cards have now won four of their last six games in all competitions, including an impressive 3-0 win over Hartlepool United, in their last league outing. They currently sit in eighth place in the distorted league table, with a game in hand on each of the four teams above them, but with the likes of Solihull Moors, Stockport County and Eastleigh all with games in hand below them. Victory over the Shots, however, would go a long way to ensuring the Cards enter the new year in the play-off places.

Aldershot have begun to recover from their challenging start to the season and are currently in 17th place, with 15 points from 13 games, including four wins and three draws. Like Woking, they progressed in the FA Trophy last weekend, beating minnows Welwyn Garden City 5-1. They have lost their last two league games, coming from two goals down to draw level with Boreham Wood, before eventually losing 3-2, and surrendering a first-half lead to lose 3-1 at home to FC Halifax Town â€“ former Card Jake Hyde netting a brace. Their only league win since mid-November came in a 2-1 home success against Dagenham & Redbridge.

Max Kretzschmar remains suspended following his red card against Hartlepool. He will also miss the game on Monday against Eastleigh. Jack Cook will serve his one-match suspension for accumulating five yellow cards, having also missed the Dover game through illness. Ben Gerring has now returned from his one-month loan with National League South side Oxford City, but is also suspended for this game, meaning Nathan Collier will likely keep his place in the centre of defence. New signing Jamar Loza will also be eyeing a start after making his latest debut for the club from the bench on Saturday.

The Shots are coached by Danny Searle, who took over ahead of last season, following the departure of Gary Waddock. Searle was expecting to be managing in National League South, but saw his side returned to the National League following the clubâ€™s late reprieve. He endured a challenging first campaign in charge but ultimately steered the club clear of the relegation places, finishing in 19th place, and of course earned the local bragging rights with his win at the Laithwaite Community Stadium. He was previously manager of Braintree Town during the 2018/19 season.

The Aldershot squad includes two former Cards, striker Chike Kandi and midfielder Toby Edser, but star player Craig Tanner and striker Ross McCormack are both currently sidelined through injury. The Shots have responded by adding a number of talented loan players, including Watford winger Joseph Hungbo, Wycombe defender Giles Phillips, and Middlesbrough goalkeeper Brad James; but striker Mohamed Bettamer, who scored against Woking last time out, remains the biggest threat. The former Staines Town and Braintree Town man will be looking to add to his five league goals this season.

Despite falling behind early on to Bettamerâ€™s close-range finish, the Cards fought their way back into the game, and deservedly levelled shortly before the half-time interval through debutant Josh Davison. The visitors continued to have the better of the second-half and were eventually rewarded with a winning goal 13 minutes from time as Max Kretzschmar beat goalkeeper Mitch Walker to the ball and slotted home from the edge of the penalty area.

Woking are at home to Eastleigh on Bank Holiday Monday, in a game which will be shown live on BT Sport, thatâ€™s followed by the return match at home to Aldershot next Saturday.

The Cards went down to a frustrating 3-0 defeat on Boxing Day against fierce rivals Aldershot Town, who gained revenge for the FA Cup defeat in October, as a controversial decision to allow the opening goal to stand after the linesman flagged for offside, and some abject defending, condemned them to derby day defeat.

Dowse made two changes to side that started the FA Trophy 2-1 win over Dover Athletic, as Kane Ferdinand came in along with Jamar Loza, who made his first start on his return to the club after signing from Kings Lynn, as Matt Jarvis and Dave Tarpey made way and were among the substitutes.

The game was sadly played behind closed doors, as the Aldershot area was moved into Tier 4 Covid-19 restrictions on Boxing Day. Despite the lack of atmosphere, the Cards nearly made a dream start in the 1st minute, as almost straight from the kick-off, Loza made a surging run through the middle and his low left foot shot from the edge of the box nearly found the bottom right-hand corner.

Woking were by far the better side in the opening exchanges and Davidson was then brought down in the 15th minute by Shadrach Ogie after running clear of the centre back, but Josh Casey failed to trouble the Aldershot keeper - firing over the bar from the resulting free kick.

There was only one team in control and attacking in the first half an hour, and the ball then fell to Loza a minute later on the left-side of the penalty box, but he couldnâ€™t keep his volley down from a tight angle, as his rising effort flew past the right-hand post.

The Shots finally mustered their first attempt at goal in the 21st minute, when the pacey Chike Kandi found Mo Bettamer, but he failed to find the target.

The Cards continued to look dangerous and looked by far the most likely to break the deadlock, especially through Loza, whose direct running was causing problems for the home side.

In the 26th minute he was then fouled in the final third, winning a free kick a few yards from the corner of the left-hand side of the box. From the free-kick it was nearly One-Nil to Woking, as Charlie Cooperâ€™s right-footed effort looked like it was heading in, but George Fowlerâ€™s diving header to safety kept the scores level.

Further free-kicks and corners followed for the Cards and it looked like a goal was coming, but the game was turned on its head in the 32nd minute, as Aldershot controversially took the lead after breaking quickly down the left through Kandi.

A header from a set-piece fell into the path of the unmarked Harrison Panayiotou 8 yards out, who looked well offside, but slotted home past Craig Ross. The linesman clearly raised his flag, but then changed his mind after the referee consulted with him, much to the anger of Wokingâ€™s players.

Then in the blink of an eye in the 34th minute, it was 2-0 to Aldershot, as Wokingâ€™s defence switched off and the second was too easy for the home side. Former Woking player Toby Edser drove forward before laying it off to Bettamer on the right, and his cross found the unmarked Jermaine Anderson, who made no mistake.

The Cardsâ€™ defence was at sixes and sevens and a defensive error by Shotton then gift-wrapped a second for Anderson, who bundled home to make it 3-0, after the impressive Edser - the best player on the pitch - had created the opportunity and the third goal gave Woking a mountain to climb.

After three goals in six minutes, the Cards looked shell-shocked having been by far the better side in the first 30 minutes without finding the breakthrough. Aldershot had scored three goals from four shots in the first half.

The visitors needed a reaction early on, and Dowse brought on Jarvis for Ben Dempsey in the 52nd minute, as he looked to haul the Cards back into the game, as Ferdinand was dropped into a deeper midfield role.

Aldershot though looked likely to add a fourth with Woking failing to create much. Edser then threatened again with a shot over the crossbar before Kyran Lofthouse was then booked in the 58th minute for bringing down a fast-break from Kandi.

Tarpey then replaced Slavi Spasov in the 62nd minute, but the Cards still lacked a spark going forward and the home side were looking comfortable, defending deeply and looking organised.

Finally, in the 66th minute they gave Aldershot something to deal with as Lofthouse made a marauding run into the box, but his left foot cross was scrambled away, although a pass out wide to the unmarked Jarvis may have been the better option.

Dowse made a last roll of the dice in the 78th minute, bringing on Jayden Wareham for Loza, who after a bright opening half an hour, had struggled to make any impact in the game. 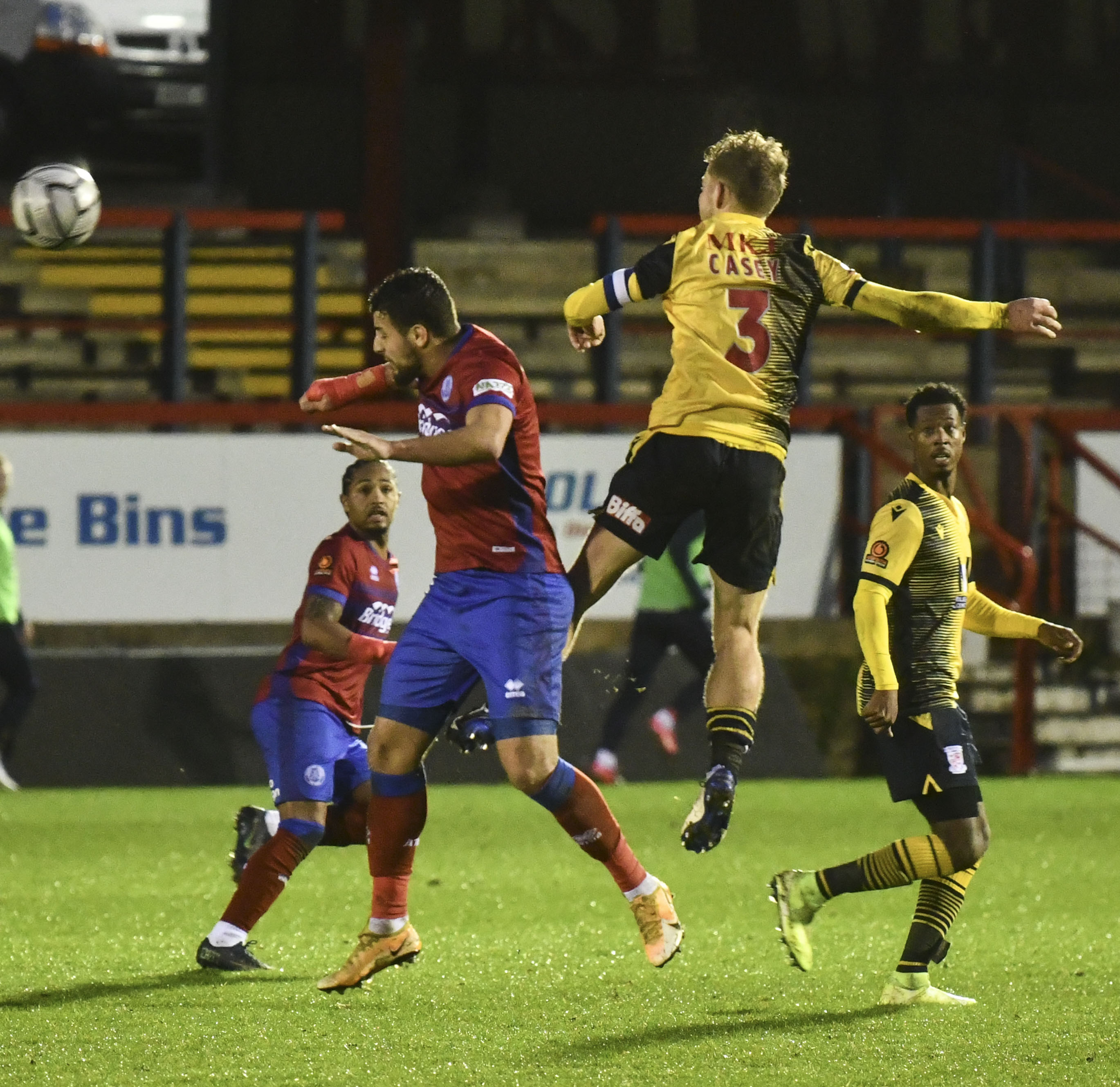 The home side were in complete control and happy to get the ball forward quickly and push the Cards back, as Woking, despite working hard, failed to create chances and make much of an impact on the game.

A frustrating afternoon was summed up in the 85th minute, when Wareham, who had made an impact since coming on, crossed after an energetic run down the right, but the ball failed to find a Woking shirt and Tarpey then picked up a yellow card for a lunging tackle on Sendles-White.

Remarkably, it took the Cards until the 89th minute to register a shot on target in the second half, as Jarvis found some space on the edge of the box, but his curling right-foot shot was comfortably saved by Brad James in the Aldershot goal.

The home side saw out the remaining minutes to take the three points on a disappointing afternoon for the Cards when nothing seemed to go their way, and were by far the better side in the opening 30 minutes, before the game was over in a crazy six-minute spell.

A controversial decision to award the opening goal totally changed the flow of the game and seemed to affect Woking, and they seemed to lose their heads a little bit defensively immediately afterwards and looked a bit ragged, gifting two more goals to Aldershot. The defence seemed to miss leadership at the heart of the back four and, in particular, the dependable Jack Cook.

The defeat moves Woking down to 10th place in the National League, and they have little time to recover, but an immediate opportunity to put things right and get back on track for a play-off spot, as they host Eastleigh less than 48 hours later at 12.30pm on Monday, in a game live on BT Sport.

Man of the Match: Kane Ferdinand â€“ Worked tirelessly in the centre of the park and did his best to make something happen, on a frustrating afternoon for the Cards