Woking climbed back to the top of the table for the first time since the turn of the year with a pulsating 3-1 victory over Hemel Hempstead Town.

A well taken header by Paul Hodges and a Dave Tarpey penalty put the Cards in control in the first half before Harvey Bradbury settled the nerves with a superbly finished last-minute goal after Hemel had halved the deficit early in the second period.

The win moves Woking two points clear of Torquay United on 62 points but with 13 games to play they will know thereâ€™s still a long way to go.

Fresh off the back of straight home victories over strugglers East Thurrock United and Weston-super-Mare, the Cards were looking to take full advantage of their game in hand and move top of the table ahead of their Devonian rivals.

Woking won the reverse fixture 2-0 against the Tudors at Vauxhall Road back in August courtesy of second-half goals from Max Kretzschmar and Duane Ofori-Acheampong when the Cards were on their fine winning run at the start of the season.

Going into the game, which had to be moved because of Wokingâ€™s FA Cup third round clash with Watford, Hemel were 13th in the table and had only won once in their previous seven league games - and that was against lowly Dulwich Hamlet.

But they still boasted a strong squad that included the likes of former Watford centre-back Darren Ward and ex-Arsenal striker Sanchez Watt. A familiar face was Ismail Yakubu, who played 32 games for the Cards between 2015 and 2017, named on Hemelâ€™s bench.

Woking boss Alan Dowson made one change to the side that beat Weston-super-Mare 2-1 on Saturday, reuniting Ben Gerring with Jack Cook in central defence after his one-match ban and moving Ian Gayle to right-back.

Dan Spence was dropped altogether and academy youngster Charlie Hester-Cook was named among the substitutes following a loan spell at Leatherhead.

On a cold and crisp evening the game burst into action almost from the kick-off as Cook slipped on the edge of the box trying to cut out a ball but the grateful recipient Leon Lobjoltâ€™s rasping shot was saved by Craig Ross diving low to his left.

But it was to be Woking who drew first blood in the fourth minute as Tarpey whipped in a cross from the left and Hodges timed his run to perfection, arriving at the back post to head home. 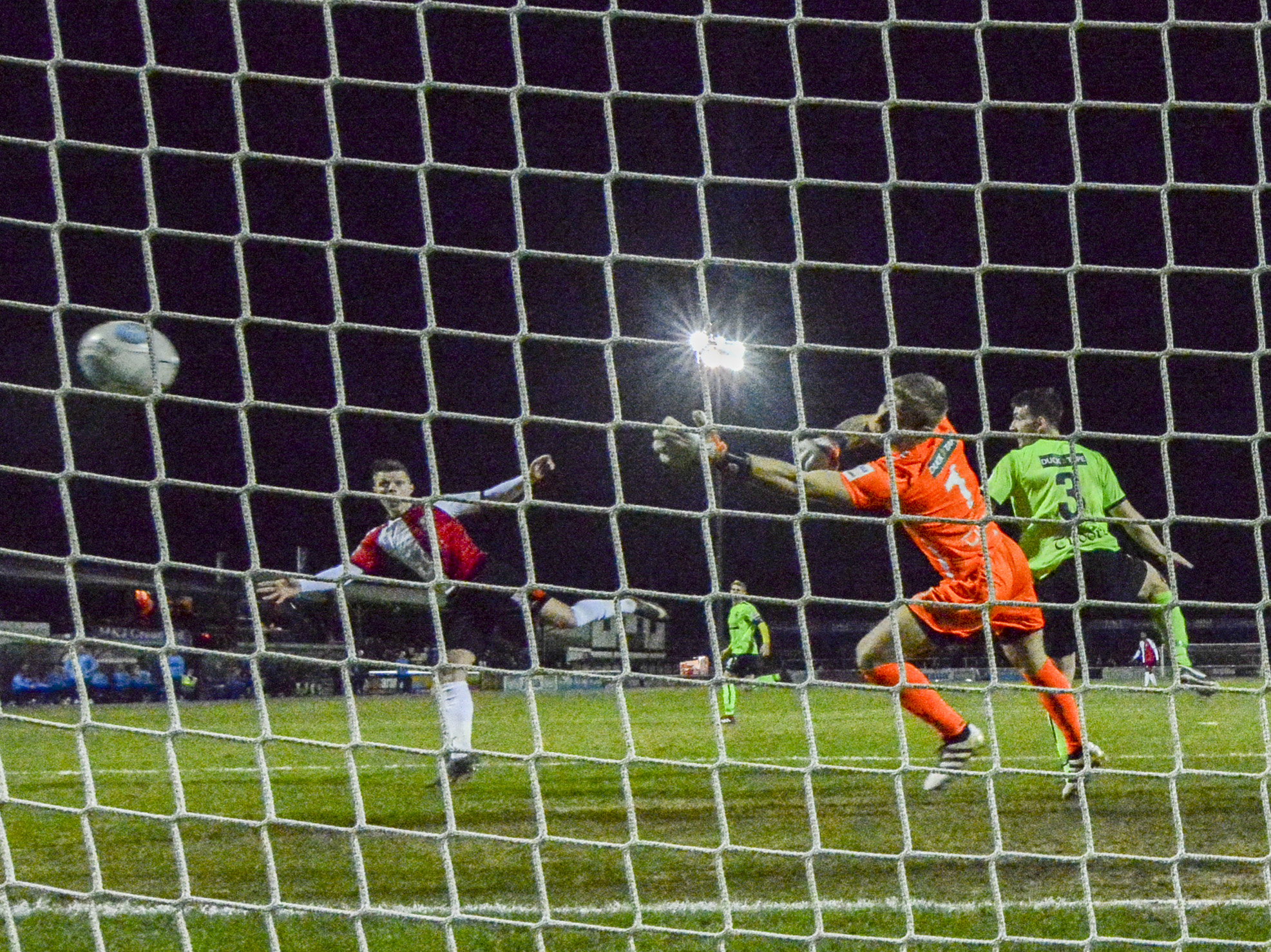 Moments later Greg Luer fired in another ball from the other flank but Tarpey who was always struggling to get on the end of it headed just wide of the left hand post.

Then on 12 minutes Josh Casey won the ball in midfield and surged forward, feeding Tarpey with a fantastic through ball only for the on-loan Barnet man to be scythed down by Oliver Swain.

The referee had no hesitation in pointing to the spot and handed Swain a yellow card for his misdemeanours.

Tarpey stepped up to send Laurie Walker the wrong way, stroking the ball low into the right hand corner.

Tarpey was involved again minutes later as his corner was headed narrowly wide of the right post by Gayle.

At the other end Cook handed the Tudors another gilt-edged chance when his sloppy pass was intercepted by Scott Shulton but his scuffed effort was dived upon by Ross.

With the pace of the game showing no signs of relenting, the ball then fell to Hodges on the right hand edge of the Hemel box but his half-volley piledriver was brilliantly tipped away by Walker.

Then on the half-hour a long free-kick from Casey evaded the Hemel back line and fell to Cook in the six-yard box but he was unable the control the bobbling ball and scooped his shot over the bar.

With the second half only three minutes old Woking were rocked back on their heels when the ball fell kindly for Lobjoit and his snap-shot beat Ross at his near post.

Christian Jolley then found his way into the book for a crude challenge on the edge of the Woking box.

Jack Snelus then hauled down Allassani in full flight to complete the trio of yellow cards as the game threatened to descend into melee.

A Casey deep free-kick then fell to Luer in the box and his shot was parried and landed at the feet of Hodges but his stinging shot was saved by Walker.

On 65 minutes Dowson made his first change, bringing on Jake Hyde for the lively Allassani.

Hyde had a chance almost straight away after being slipped in by Hodges, but his shot was smartly blocked by Walker when one-on-one.

A slick move then saw Luer feed Tarpey down the wing who played a superb ball into Hyde but the substitute could only put his effort over the bar under pressure from the advancing Walker.

Having run himself into the ground, Tarpey was then replaced with Bradbury in the 79th minute.

Then with Hemel threatening to lay siege to the Woking goal Ward made an absolute hash of a hopeful ball forward from defence, Bradbury picked his pocket and rounded the keeper to finish with aplomb in the 90th minute.

Despite a few nervy moments in the second period, it was a good all-round performance from the Cards, however, with games coming up against five of the top seven they will need to be on their mettle to maintain top spot.

Next up Woking travel to Princes Park Stadium on Saturday with their tails up looking to avenge the last-minute 1-0 home defeat against Dartford Town earlier this month.

Man of the Match: Josh Casey - led by example with surging runs down the left starting many of Wokingâ€™s best attacks, setting up Tarpey for his penalty.
Tags
Share Facebook Twitter Print