Cards Up Their Performance in Spirited Romans Clash

Bath City welcomed the Cards to Twerton Park (which, like Kingfield is the subject of an ambitious development plan) on a lovely sunny afternoon and with the spring grass looking good.

New signings James Ferry and Kieron Cadogan were in the starting line-up for Woking alongside Armani Little, back from injury. Jack Cook started in place of Nathan Collier and Paul Hodges and Reise Allassani dropped to the bench, with Greg Luer, Nathan Collier and another recent signing, Kieran Glynn, as the other substitutes. Dowse chose not to have a replacement keeper.

The crowd was much bigger than Bath would usually expect, at 1,710, which included 270 from Woking. Cards fans will have been pleased to see a much better performance than against Welling or Slough in all areas of the team. The return of Armani Little was significant and supporters will be wondering what might have been if he had not been injured recently. In the end, this was a fair result for a good game - and that might be a good thing as the teams may well meet again in the play-offs, as the result very probably means that the Cards will feature in them if they are unable to dislodge Torquay.

Woking started kicking up the obvious slope at Twerton Park and played brightly in a 4-2-3-1 formation with Hyde at the front, and Little, Kretzschmar and Cadogan supporting, Durojaiye and Ferry were in front of a defence which saw Cook playing at right back.

In the second minute Woking put together a passing move with Hyde getting the ball to Little and then on to Ferry but Casey was just past the ball.

There were a good header from Cadogan to Jake Hyde, who might have threatened but was offside.

A dangerous attack from Bath followed a good cross from Raynes and it lingered on the goal line, but it was cleared, only to nearly creep into the net in the far corner with Ross not in the goalmouth. Sighs of relief were heard from Woking supporters. Just a minute later Bath got a shot in, but it was well over the bar.

Both sides were wary of conceding the critical first goal and the referee was letting play flow. Hinds from Bath went down in the area, but â€˜No penaltyâ€™ decided Mr Cartmel.

On 13 mins, a foul by Durojaiye at around 30 yards out from goal gave Stearn a chance to get the ball in for Bath. He tried to get the ball to the wing, but it was put out for a goal kick and after 15 minutes there had been just the one 'close shave' for Bath and no real threat from Woking at all. Bath had got back into the match after early dominance of possession by the Cards.

Then Woking made the breakthrough. On 19 minutes, Clarke, the Bath keeper badly sliced a clearance which was picked up by Cadogan who got the ball to Hyde who passed it along to Kretzschmar who slotted the ball home, coolly, into the far corner - 1-0 to the Cards and Bath's impressive recent home record was under threat. 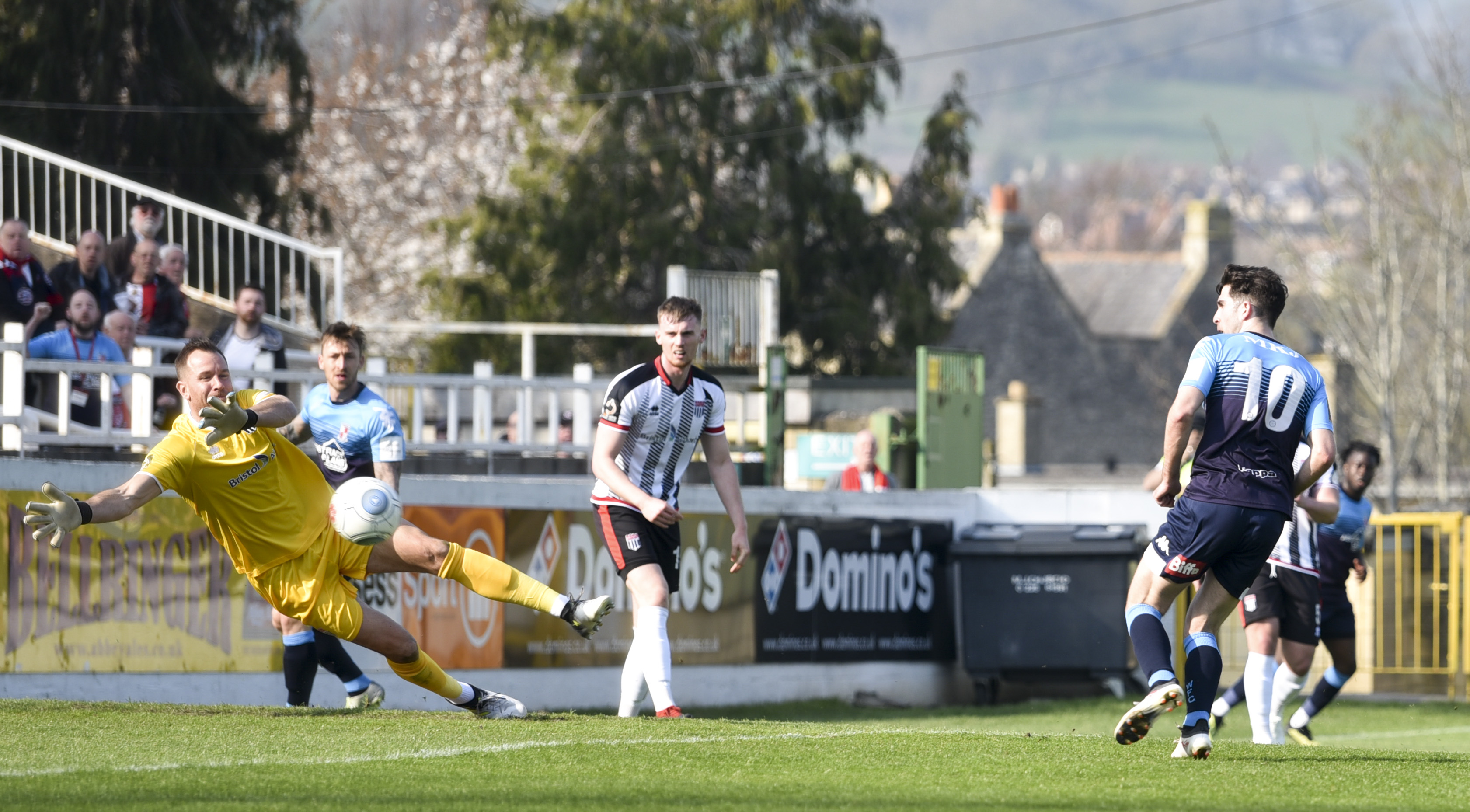 Bath tried to react quickly although Clarke made another weak clearance. A shot by Watkins after a pass by Raynes looked dangerous but the shot was straight at Ross. For the next ten minutes, my notes are almost all about Bath efforts, but Woking took the sting out of the attempted reply and overall, the period up to the half hour was fairly even.

Little was enjoying being back in the team and found Durojaiye who was fouled for a free kick at 35 yards. Kretzschmar got the ball to Diarra, but he committed a foul and the attack petered out. Woking were gradually starting to take more control. Armani Little's skill was starting to be the difference between the two sides and at times he was almost playing as a #10, getting ahead of Hyde when the ball was being held up.

On the 39th minute an attack by Bath saw a shot, but it was not very strong and outside Ross's right hand post.

Bath won a free kick about 35 yards from goal. The resulting header from Tom Smith was well saved by Ross.

A move between Little and Casey led to an inviting cross, but Cadogan couldn't get on the end of it and the ball went out in the corner.

There was excitement in the one minute of extra time when Kretzschmar passed to Little who turned to make space and force a corner. Kretzschmar took the corner and Diarra got up well to win the ball but flashed his header just wide of the far post.

Bath started the second half on the front foot without threatening.

An attack involving Kretzschmar, Cadogan and Hyde saw Cook doing well to keep the ball alive, but the attack petered out when Cadogan couldn't get to the ball.

On 54 mins a free kick to Bath on the left wing looked as though it might pose a threat, but sailed over the heads of the forwards. Bath were trying hard and a move saw Straker beating Cook to threaten, but Ross was able to take the cross out of the air

Three minutes later, a cross by Ferry to Kretzschmar allowed a shot which got very close but Clark tipped it around the post. Immediately, the Cards went for a fast corner - almost getting the ball in the goal only to see it bouncing off the post and out.

After an hour, Dowse made his first tactical change with Luer coming on for Hyde - a slightly surprising move it seemed at the time, as Hyde had been working well, but without much luck. However, Luer gave more mobility to the front rank and he brought others into the game well. Stearn went off for Bath, to be replaced by Pryce.

Durojaiye conceded a free kick close to the edge of the box on the Card's right and in a dangerous position. Bath put in a tempting cross - but it was well defended by Gerring.

A foul by Woking saw a well-worked free kick by Bath but Ross was able to make a comfortable save.

Kretzschmar, Little and Luer were combining well with Cadogan and Woking were looking threatening although a good chance for the Cards was frustrated when Kretzschmar couldn't get his feet sorted.

Bath went straight up the other end and a sharp strike from an unmarked Watkins after a pass from Morton put the ball into the far corner and out of Ross's reach, so it was 1 - 1 in the 72nd minute.

Again the Cards tried to react and a strong strike by Kretzschmar was well saved and ball didn't quite fall to Cadogan - there were a series of good passing moves on the left wing, again and, by now, Casey was playing more as a wingback.

Both sides threatened, but neither could find the net. On 84 minutes Gerring thought he had been fouled, but Bath went away with the ball and only a good foot in by Durojaiye stopped a strong shot.

Hodges came on for Ferry on 83 minutes as the Cards tried to take all three points. Shortly after coming on, he charged out of defence and passed to Luer who was badly fouled and that should have been a yellow card for the Bath defender, the press box universally thought. Casey took the free kick and Cook got a touch to it, but it went out for a goal kick.

The fourth official decided that there should be three minutes of extra time and during that time, a corner to Bath was defended and there was a charge down the right wing by Cook.

In the 93rd minute, a frustrated Durojaiye was given a yellow card for a tackle on Joe Raynes and also Cook for an earlier tackle.

So honours were even; either side could have won it but, conversely, neither deserved to lose, so it was a fair result in a game that was played in a competitive but fair spirit. The Cardinals showed that last week's performance was something of a blip and the attack looked much better than for the last two games - the influence of Armani Little was really important to those around him. Neither of the new signings had a dramatic impact and after his two goals against Welling, Allassani might be disappointed he didnâ€™t get a chance to play.

With Torquay taking all three points and in great form, the Cards bid for automatic promotion looks to be in serious trouble and a win or even a draw by Torquay next week could all but extinguish those hopes.