It all came down to this and the Cards did it. In front of a sold-out crowd at the Laithwaite Community Stadium, Woking clinched promotion back to the National League at the first time of asking, winning the play-off final against Welling via a moment of free-kick magic from Armani Little just before half-time. In contrast to last week's emphatic semi-final victory over Wealdstone, a game book-ended by quick-fire goals for either side, this was a far more disciplined, committed and controlled performance from the Cards, who did just enough to get the big prize.

Dowse made two changes to the side that started that dramatic semi-final victory last week over Wealdstone. Clearly encouraged by the impact of substitutes Kane Ferdinand and Jake Hyde in the latter stages of that game, the pair came in for Olu Durojaiye and Greg Luer respectively; Luer was unfortunately not in the matchday squad due to injury. Last season’s Cards skipper Richard Orlu was on the bench for the visitors; a late cameo of significance from him would certainly not have gone down well.

Beneath glorious blue skies, with a cool breeze in the air, Woking kicked off facing the Kingfield Road End, the packed-out stand producing great noise from the outset. The Cards began the game brighter, Armani Little and Reise Allassani getting deliveries in early from the attacking left, the latter particularly unlucky not to find an imposing Jake Hyde near the penalty spot, keeper Dan Wilks just edging out the front man to claim.

The half progressed in a manner not dissimilar to the cup and league encounters between the two at the Laithwaite earlier in the campaign. Tight, fiercely contested, well matched, with much endeavour from both, though substantial goal opportunities kept at a premium. Bradley Goldberg looked the man most likely to produce something for the visitors throughout the half, digging out an effort over the bar from the edge of the area, before providing a knockdown for tall front man Danny Mills, who drove an effort into the side netting from the right side of the area.

On the half-hour the Cards survived a let-off, Moussa Diarra, in his only misstep of the afternoon, slid and missed a possible through ball interception, allowing Goldberg to strike inside the area. The ball rebounded off the inside of the far post and straight into the arms of Craig Ross, to everyone's relief.

Woking's best chance of the half followed a few minutes after, Josh Casey and Allassani linking up well down the attacking left, with the latter measuring a nice through ball to Armani Little surging into the box. The midfielder was unable to muster any power or direction in his effort from 6 yards out on the angle and it was ultimately a comfortable save for Dan Wilks

Little would however make the breakthrough for the Cards just before half-time. A careless challenge from centre half Josh Hill resulted in the game's first caution and a free kick awarded in proper 'Armani Territory' outside the box. Sure enough, the midfielder stepped up and struck a superb effort into the far right of the goal, sending the sell-out crowd into raptures. 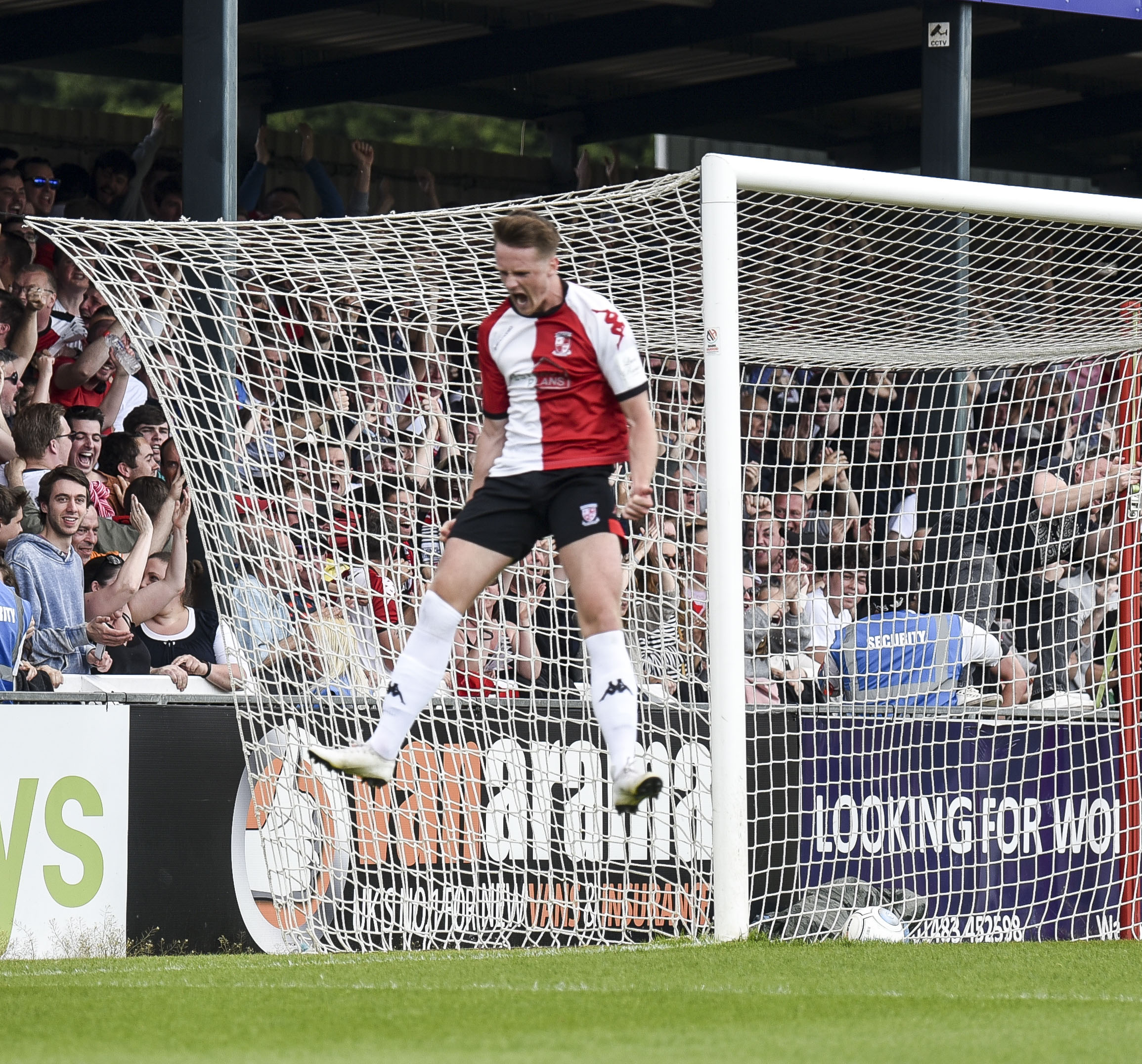 During an opening to the second half which saw Welling turn up the attacking pressure, Jake Hyde squandered a great chance just ahead of the hour mark. Fed through on goal by Kane Ferdinand, the match winner last week looked set to repeat that very goal with a composed lob into the net, but instead opted for low placement, which Dan Wilks was able to deal with, sticking a leg out to make the save. Allassani and Hyde linked well shortly after down the left, the former getting a shot off just sailing wide of the near post.

Woking continued to sit back and seemed content to do this and then pounce on the counter. With 25 minutes to go, Welling manager Steve King looked to up the ante with a double substitution, including the introduction of team of the year winger Nassim L'Ghoul. The diminutive attacker had been lively at the Laithwaite earlier in the season and got into the thick of action straight away, fighting his was into the box and having a penalty appeal turned down, before doing really well to get to the byline and put in a searching cross, well dealt with by Casey.

The Wings continued to apply pressure. Josh Hill went for the spectacular just inside the area, acrobatically striking an effort which was headed out for a corner. Danny Mills then surged between the Woking centre halves and struck a powerful effort just inside the box, forcing a great diving save from Craig Ross.

The introduction of Paul Hodges with a quarter of an hour to go gave the Cards an outlet to get up field quicker and it was the usual energetic work of the substitute that led to opportunities for Allassani to strike over from distance and Hyde to strike low at the near post and force a save.

Thereafter it was just about weathering the late Welling pressure, Dowse bringing on Durojaiye and Harvey Bradbury late on to assist with that. In a flurry of continued imperious defending, decisive aerial parrying from Ross and crowd frustration's that the attacking front-line didn't fancy running the clock down near the corner flag (!), the referee blew his whistle after 5 additional minutes. Cue the pitch invasion and scenes of jubilation.

Man of the Match: Ben Gerring. Imperious all afternoon with a display that merited his National League South Team of the Year inclusion.