After experiencing the highs of a very promising opening day win at free-spending Dagenham & Redbridge on Saturday, Woking fell back down to earth with a disappointing 1-0 defeat at home to local rivals Aldershot Town. In a classic example of â€˜a game of two halvesâ€™, the Cards dominated much of the first half and had a couple of gilt-edged chances to take the lead, before falling behind against the run of play to a well-taken goal from Jacob Berkeley-Agyepong. In the second half, the Cards struggled to truly get going, and the Shots comfortably saw out the match to notch their first 3 points of the season.

Despite an occasionally stiff breeze, it was still a pleasant summerâ€™s evening that greeted the Woking players as they prepared for their first home game of the season. Dowse, unsurprisingly, chose to keep faith with the players that put in a brilliant display at Dagenham, which meant sticking with the 5-3-2 system. Craig Ross kept his place in goal, with the defensive line consisting of Jack Cook, Manny Parry, Moussa Diarra, Ben Gerring and captain Josh Casey. Shaun Donnellan and Kane Ferdinand played behind the more attacking Max Kretzschmar in midfield, whilst Jake Hyde and Dave Tarpey continued their promising partnership in attack. In contrast, the Shots made 3 changes from the team which started their opening day defeat to AFC Fylde.

The home fans behind the goal in the KRE were in fine voice as the game got underway, perhaps sensing the Cards had a great chance to get their first win over Aldershot for almost 3 and a Â½ years. After a somewhat cagey first few minutes, the game burst into life on the 6-minute mark. After a series of Woking long throw-ins and corners were eventually cleared, the Shots broke very quickly on the counter attack, exposing the Cards lack of pace at the back. Fortunately for Woking, Ethan Chislett shot straight at the grateful Ross, when perhaps a pass across goal to a teammate would have been the more sensible and productive option.

Wokingâ€™s first chance of the game came just a couple of minutes later, and what a glorious one it was. Casey received the ball on the left touchline, mid-way inside the Aldershot half. He tricked and turned his way into the penalty area past 2 or 3 hapless Shots defenders, and found himself with a wonderful sighting of goal. Unfortunately for the Cards and Casey, his shot was blocked by a last-ditch challenge from an Aldershot defender. It would have been a brilliant solo effort. 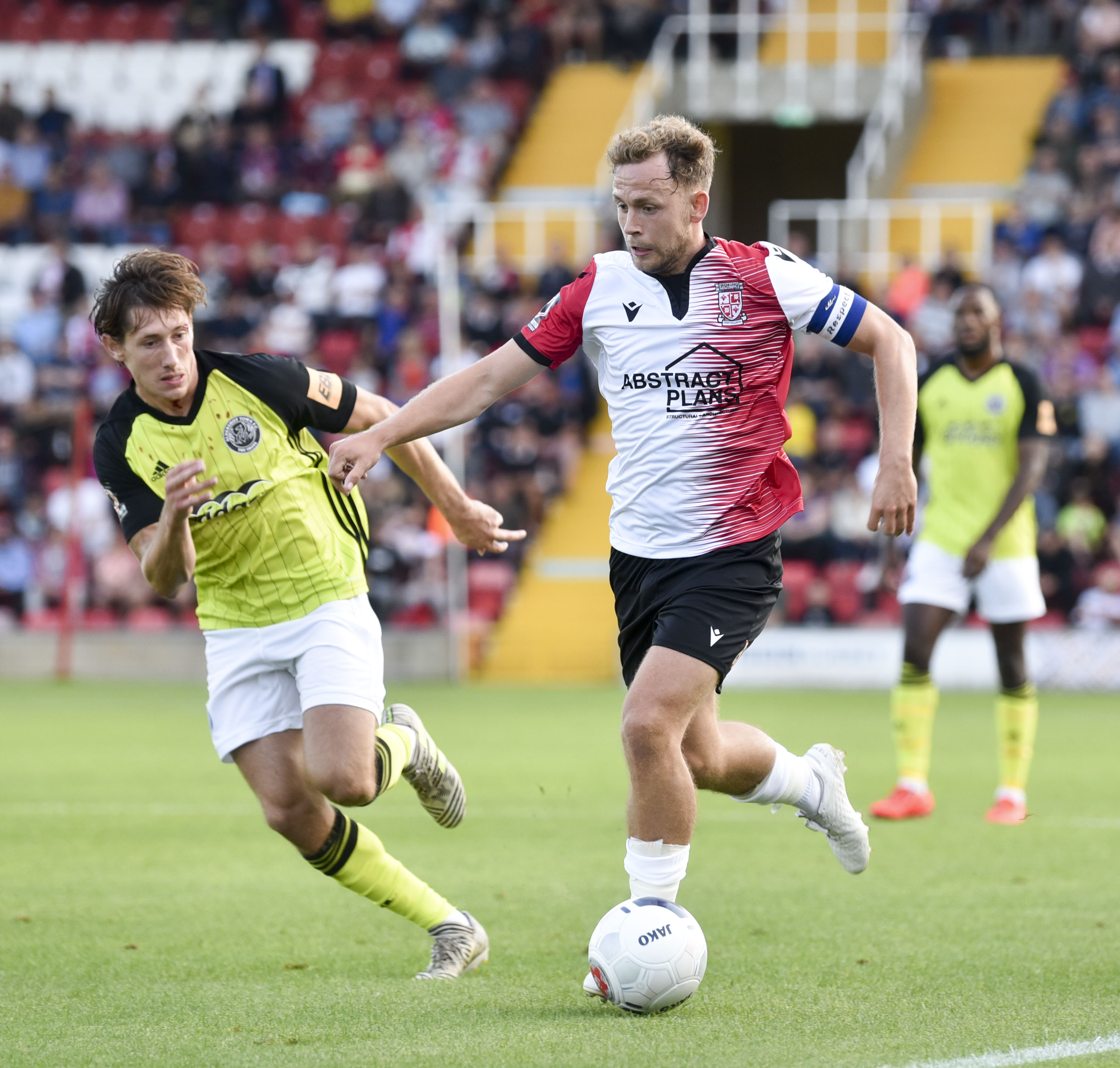 By this point, Woking had the game by the scruff of the neck, dominating possession and starting to create plenty of chances. In the 11th minute, Hyde and Kretzschmar combined well on the left touchline, Hyde receiving the ball back from Kretzschmar after an initial lay-off. This created a few yards of space on the edge of the area, but Hydeâ€™s fierce shot was well gathered by Mitch Walker in the Aldershot goal.

Walker made an even better save in the 16th minute. A Casey throw-in, again from the left touchline, was dummied by Kretzschmar, totally flummoxing the Shots defence. Finding himself with just the keeper to beat, he put it to the keeperâ€™s left, however to his credit Walker pulled off a fine save. Undeterred, Woking continued to press for the opener, and 4 minutes later, Tarpey went down in the box claiming a penalty after his initial free kick was cleared, but referee Andrew Miller waved away any appeals. It felt like just a matter of time before the Cards took the lead.

Lo and behold, totally against the run of play, Aldershot took the lead in the 23rd minute. An innocuous looking ball was looped into the Cards box. Diarra seemed to misjudge it and the ball evaded him, falling into Berkeley-Agyepongâ€™s path. The Shots winger jumped at the chance to put the away side ahead, clinically firing past Ross in to the top corner. The Aldershot fans in the Chris Lane Terrace unsurprisingly erupted. Whether it was deserved or not, they had the crucial first goal of the night.

For the next few minutes, it seemed the Cards struggled to come to terms with conceding and Aldershot began to get on top; however, from around the half hour mark, Woking gradually began to reverse that. Tarpey fired a free kick straight into Walkerâ€™s arms, and soon after, a long Kretzschmar shot narrowly evaded Walkerâ€™s crossbar. In the 39th minute, the home side thought that they had the goal that their overall dominance had deserved, however the officials had other ideas. Cook won a free kick after being fouled by James Rowe; the Shotâ€™s midfielder being booked in the process. Casey delivered into the Aldershot penalty area, and after a goalmouth scramble, the ball eventually fell to Hyde to fire home. Unfortunately for the initially unaware Cardsâ€™ striker, the assistant referee adjudged him to be in an offside position, and play restarted with an Aldershot free kick. The Cards still had time to exert even more pressure on Walkerâ€™s goal, but in-keeping with much of what had gone before, Gerring headed over a glorious chance at the back post from a Cook long throw-in.

Dowse made no changes at half time, probably happy with the way his players had performed, apart from lacking ruthlessness in front of goal. Unfortunately, scarcely anything of note happened in the first 20 minutes of the second half, apart from a Ferdinand booking for a foul on Lewis Kinsella 8 minutes into the half. The away side were now beginning to dominate the midfield and Woking were struggling to create clear-cut chances.

The Cards made 2 substitutions in the 64th minute, Ibrahim Meite and Tyreke Johnson replacing Hyde and Kretzschmar. Unhappily for the home side, these changes didnâ€™t have the immediate desired effect, and Aldershot retained control of the game. 2 minutes later, a dangerous low James Rowe corner to Rossâ€™s front post was very well blocked by Casey, Chislett eventually volleying over from the edge of the box.

For the next 10 minutes a similar pattern of play continued, the Cards firing many corners and long throw-ins into the Aldershot box that were all being comfortably dealt with by the away defence, whereas the Shots were beginning to look increasingly dangerous on the counter. Indeed, in the 78th minute, Cook lost out to Berkeley-Agyepong on the half way line, and after playing a 1-2 with Connor Shields, found himself with just Ross to beat. Luckily from Wokingâ€™s point of view, he slipped at the vital moment and the home keeper saved comfortably.

In the 79th minute, the away side were forced to make their first change, Harrison Panayiotou replacing goal scorer Berkeley-Agyepong, who seemed to have picked up a knock. However, Woking were still struggling to regain a foothold in the game and create anything of note.

Shamir Mullins received a booking from referee Miller in the 85th minute, pulling back Ferdinand when attempting to break into the Aldershot half. A minute later, Godfrey Poku replaced Donnellan, but despite a few more long-balls, long throw-ins and corners into the Aldershot box, the overall quality was poor and they were still being dealt with easily by the two towering Aldershot centre-backs.

The Cards were certainly not giving up, and began piling numbers forward in search of the equaliser. However, this left them even more open on the counter attack, and in injury time the Shotâ€™s almost doubled their lead. An Aldershot clearance found its way to substitute Panayiotou, who burst forward towards Rossâ€™s goal, striking the post with a powerful shot. Woking still had time to launch one more assault on the Aldershot goal, however a Poku long-ball evaded everyone and went out for a goal kick. A very appropriate end to disappointing second 45 minutes for the Cards, and referee Millerâ€™s full-time whistle saw jubilant reactions from the away players, staff and fans.

Despite the defeat, there were certainly positives to take out of Wokingâ€™s first half display. It is likely the result would have been very different had one of the many great chances that fell the home sideâ€™s way been taken. Indeed, Dave Tarpey again looked very sharp and at times the home side looked the only winner. However, the second half display will no doubt cause Dowse some concern, especially with a tough looking game at home to Harrogate to come on Saturday. Having come out from the interval 1-0 down, Woking struggled to create anything worthy of properly testing Walker in the Aldershot goal. In contrast to Saturday, set-piece delivery was often poor and easily dealt with. With no Armani Little or Toby Edser in midfield, creativity in midfield seems to be a problem and is something for Dowse to look at. Of course, it should be noted that most Cards fans would have taken 3 points from the first 2 games, so thereâ€™s no reason for panic just yet.

Sponsorâ€™s Man of the Match: Kane Ferdinand. Battled hard in the middle of the pitch.