The Cardsâ€™ fairy tale start to the season continued as they remained top of the league after claiming a hard-fought 3-2 victory over Barrow, and 6th consecutive win in an entertaining, free flowing game. Woking missed some clear-cut chances in the first half before falling behind but came back strongly in the second half to claim the three points over their Cumbrian opponents, featuring Wayne Rooneyâ€™s brother John in central midfield. The win put the Cards two points clear at the top of the Vanarama National League.

Barrow kicked-off towards the Leslie Gosden stand but it was Woking that started the brighter and had the first effort on goal in the game when Dave Tarpey forced a good save from Joel Dixon to the left as he sent in a curling 25-yard free kick with his right foot after the lively Johnson was fouled.

The Cards then worked a good opportunity in the 7th minute when Tyreke Johnson got in behind on the left before crossing to the back-post but Hyde got in the way of the better-placed Cook, who was running in. The ball eventually fell to Toby Edser, who failed to hit the target and hit a left-foot shot wide of the right post from about 12 yards out.

This pattern of play continued, as Woking pressed well and had by far the better of the early exchanges and nearly took the lead in the 11th minute in spectacular fashion. Tarpey sent over a corner from the left which was headed clear, but Shaun Donnellan, who had been near the halfway line for the corner, ran onto it and crashed a right-footed effort against the right-hand post from all of 30 yards with Dixon beaten all ends up. 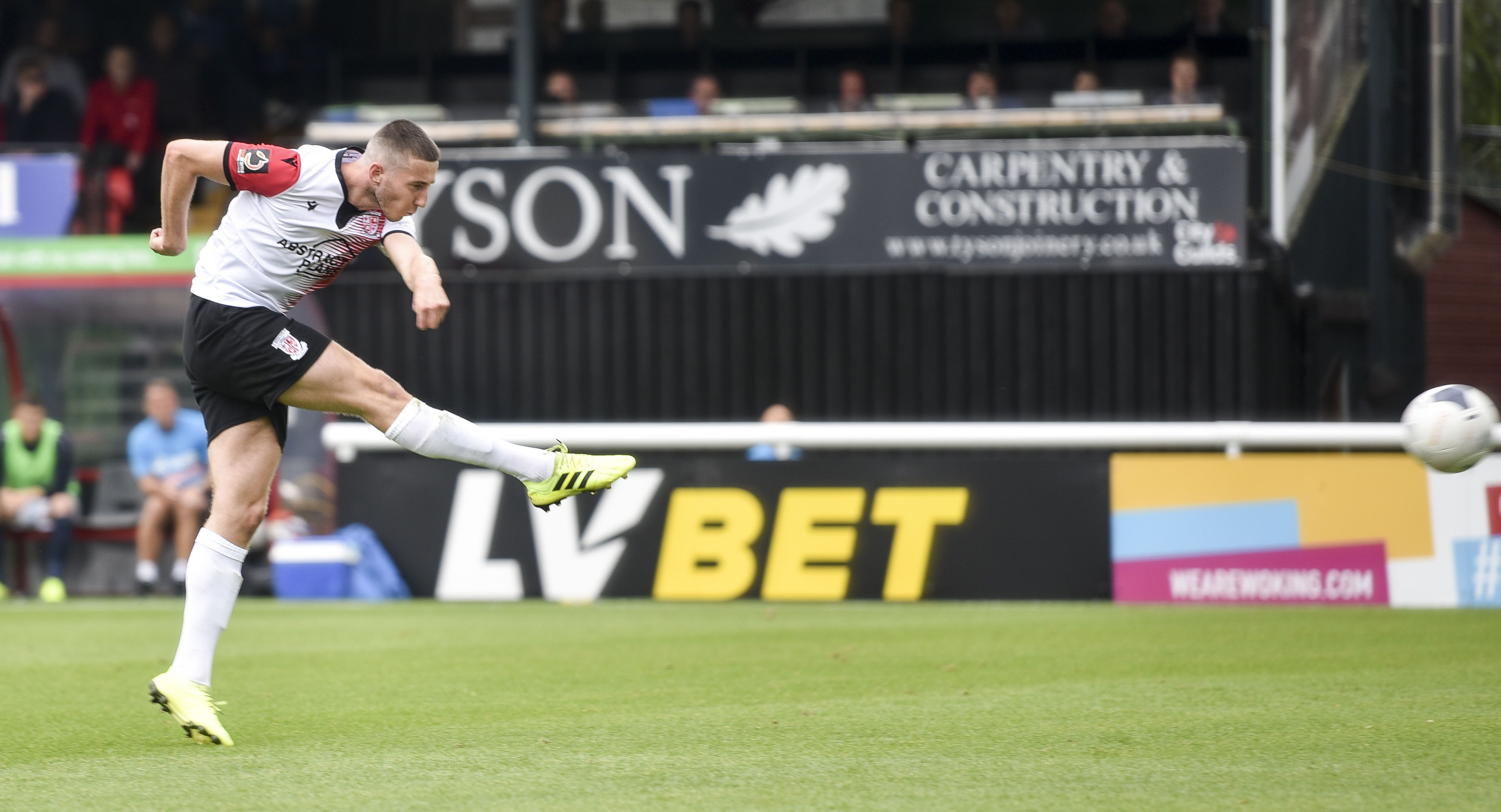 It took Barrow until the 22nd minute to register their first effort on goal but Ross saved well low to his left after Angus put in a left-footed shot after turning well in the penalty box. This seemed to wake the visitors up, who began to get more into the game and win more possession, led by Rooney in centre midfield. They took the lead in the 26th minute with a well-taken goal. Cook failed to deal with a ball on the right side of the box before it fell to Dyson, who stepped inside before placing a perfect low right-footed shot past Ross into the right-hand corner.

The Cards were forced into a change in the 28th minute when Moussa Diarra replaced the injured Ben Gerring at centre back before the most controversial moment in the game, as Woking were, it seemed, denied a clear penalty in the 32nd minute, much to the annoyance of the Kingfield faithful. Hyde picked Kane Ferdinandâ€™s run out from midfield before the midfielder tried to turn in the box and a Barrow defender seemed to pull him down, but the referee felt otherwise and awarded the visitors a free kick and even booked Kane for diving.

Woking were struggling a bit for ideas towards the end of the half and failing to create much and Barrow were having more of the possession, led by Rooney at the base of midfield, but out of nowhere they nearly equalised in the 39th minute when Tarpey broke into the area down the right but hit a shot into the side-netting.

The half-time whistle was much-needed by the Cards, who needed to regroup and get their shape back and to give Dowse the chance to work his magic and urge the need to be clinical in front of goal.

Kingfield went a bit dark at the start of the second half as the black clouds closed in, but the Cards came out with intensity and looked a different side from the one that finished the first half, almost drawing level straight after the restart in the 46th minute when Edser put in a lovely free-kick from the left and Hyde had a header superbly saved by Dixon 8 yards out.

Edser was heavily involved in everything good and he created the equaliser in the 51st minute when he floated in a perfect left-foot cross from the right, where Johnson had found some space and rose to head home into the bottom right-hand corner from 10 yards out.

The second half was end-to-end and the free flowing nature continued as Barrow threatened to take the lead before Woking nearly made it 2-1 when Edser put in a sublime corner from the right with his left peg and Diarra rose at the near post to flick a header towards goal, but Dixon pulled off a fine reflex save and the ball was scrambled away by the Barrow defence.

A few minutes later Barrow nearly took the lead as Harrison slid in after a cross from the right, but put the ball over the top after good pressure by Cook. Wokingâ€™s defence was being tested and soon after Cook then made a fine last-ditch challenge to deny Dyson an effort on goal in a dangerous position.

The Cards finally took a deserved lead in the 67th minute as the busy Tarpey nodded a header through to the alert Hyde who was through on goal only to be brought down in the box by Dixon after knocking the ball past him. At first the referee gave a free-kick much to the uproar of Cards players and fans, but after consulting with his linesman he awarded a penalty. Hyde stepped up and rifled down the middle, giving Dixon no chance and putting Woking 2-1 up.

Barrow made an inspired substitution in the 72nd minute when Josh Kay came on for Oliver Dyson and within two minutes of coming on he made an immediate impact and drew the Cumbrian side level. Kay got free on the left after the Cards switched off in defence before he stepped inside and hit a shot low to the right corner and Ross could only deflect it into the net.

The game had been open from the kick-off and that theme continued as both teams pushed for a winner and had their chances. The Cards had two chances in quick succession as Ferdinand got clear but was denied by Dixon before Tarpey had a shot blocked on the follow-up.

Woking then took the lead and the three points in the 77th minute through Hyde, who capitalised on a defensive mix-up, intercepting a backpass, to score his 6th goal in four games. The striker clinically finished with his right foot into the left corner after rounding Dixon.

The impressive Edser was replaced by Poku in the 80th minute as Dowse looked to close out the game before Johnson nearly made it 4-2 in the 87th minute with a rasping left-footed drive from 20 yards which was well-saved low to the left post. The fourth official then signalled four minutes of added time much to the annoyance of the enraged Barrow manager Ian Evatt, who was shown a yellow card by the referee, but Woking held on to win the three points in an entertaining game.

The Cards will be looking to stay top of the table and gain a seventh consecutive win at home on Tuesday night when last seasonâ€™s main rivals Torquay United - currently 10th in the National League - are the visitors. The impressive performance against Barrow and strong start to the season has Woking fans in dreamland, but Dowse and his staff are no doubt keeping the players grounded, as the Cards have two tough fixtures this week, as after Torquay they make the long trip north to Hartlepool United.