Woking put in a much-improved performance as they ended their three-game losing streak in the Vanarama National League after deservedly beating bottom of the table Chorley 1-0 through a Dave Tarpey goal, taking them up to ninth place, just one point off a play-off spot.

The Cards made five changes from the team that got hammered 6-2 away to Sutton United on New Years Day, as Craig Ross returned in goal, Godfrey Poku came into central midfield and the first choice front trio of Jamar Loza, Jake Hyde and Dave Tarpey formed their front line once again. These changes seemed to have a huge impact and helped Woking produce a vastly improved display.

On a crisp and clear afternoon, Woking kicked-off towards to the Leslie Gosden Stand and both teams were desperate for a win, as Chorley like Woking were also on a three-game losing streak. In the early stages, the Cards and their Lancastrian opponents looked equally devoid of confidence and neither side put together many good patterns of play in the early exchanges.

It was Chorley who had the first shot of the game in the 10th minute, when former Manchester City academy graduate, Courtney Meppen-Walter, who played for England at under-17 and under-18 levels, tested Ross with a left footed drive from the edge of the box.

The Cards took time to get into their stride, the three previous consecutive league defeats clearly impacted their approach and confidence, but had a good shout for a penalty turned down in the 16th minute when Hyde went down just inside the box after being found by Cook, who had made a marauding run on the right from deep.

The first 30 minutes were cagey and lacked any fluidity, but Woking were gradually asserting their authority on the visitors, and nearly took the lead in the 30th minute through Tarpey, who failed to keep a left foot volley down from 12 yards out after Diarra had nodded a header down into his path from a Shaun Donnellan free kick.

Chorley themselves then missed a good chance when Marcus Carver skipped down the left and pulled the ball back for Elliott Newby on the penalty spot, but the midfielderâ€™s well-struck effort was saved by Ross, who superbly spread himself to keep the teams level.

Towards the end of the first half the Cards sprung into life and Tarpey nearly gave them the lead in the 38th minute after being put through one-on-one with Chorleyâ€™s keeper Urwin, but his low shot was just kept out and the visitors managed to hack clear.

Woking were rampant towards the end of the half as Tarpey then hit another effort over the bar from the edge of the box after finding some space, before Loza then failed to test Urwin and blazed over on the left after scampering free and Gerring then had a header well saved after rising highest at the back post from a Tarpey corner.

The momentum that the Cards had built up at the end of the first half, led by the impressive Godfrey Poku in central midfield, continued into the second half as they pressured and harried their opponents high up the pitch.

Woking deservedly took the lead in the 51st minute when Jamar Loza, who was lively from the start of the half, skinned his marker down the left after an incisive move by the hosts and crossed for Tarpey, who buried his 8th goal of the season from a few yards out. 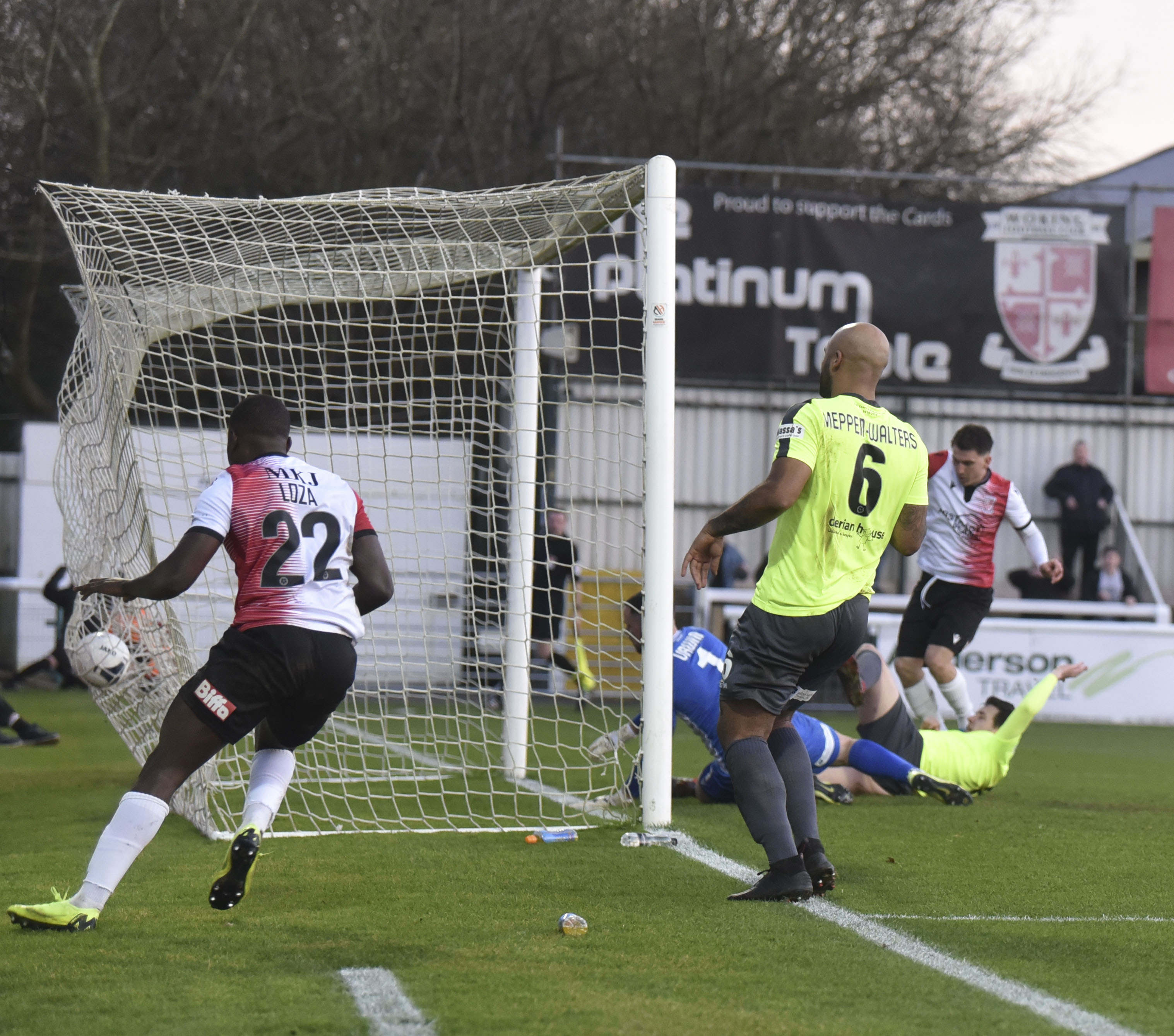 
A second goal looked to be coming, but Urwin saved from Gerring in the 56th minute after he glanced a header towards goal from a few yards out from a Ferdinand header back into the mix following a Tarpey corner.

Chorley tried to get back into the game and nearly found an equaliser in the 66th minute through their most dangerous attacker Elliott Newby, who had a shot deflected wide of the left post by the resolute Cards defence.

The Kingfield faithful were getting a bit nervy and restless and hoping the Cards could find a second goal to wrap up the three points and Ferdinand nearly delivered, after flicking a header wide from a lovely whipped cross by Cook from the right.

Basement club Chorley threw on an extra forward in the shape of Chris Holroyd as they searched for a much-needed leveller and battled hard, but lacked the quality in the final third against a well-drilled and solid Woking defence, which was much welcomed by Cards fans after shipping 10 goals in the previous two games.

Despite all the visitorâ€™s huff and puff, they failed to carve out any clear cut chance in the closing minutes and were limited to a few long-range efforts that flew harmlessly over the bar.

The Cards looked more like adding a second and Hyde nearly secured all three points in the 89th minute after Kretzschmar, who was bright after coming on for Tarpey in the 81st minute, put in a lovely cross from the right after a surging break down the right, but Hyde had his well blocked from a few yards out.

That proved to be the last action of the game as the Cards played out the final few minutes to earn an important three points and end their three-game losing streak in the National League and reignite their promotion ambitions.

Wokingâ€™s next fixture is not until the 18th of January when they travel to Wales and play Wrexham, who are 20th in the National League.

The Cards are now in ninth place, only eight points off second with a game in hand and a point off the final play-off place and will be looking to get on a bit of a run in a tightly contested league where a few wins on the bounce could boost their promotion ambitions.

Sponsorâ€™s (MKJ Group) Man of the Match: Godfrey Poku â€“ a combative display in the middle of the park and set the Cards on the front foot winning the ball back and making some surging forward runs to link midfield and attack