Itâ€™s difficult to pinpoint exactly when this Racecourse Ground encounter was lost, but the 68th-minute dismissal of Jamaican forward Jamar Loza was certainly a key moment.

Granted, the play-off chasing Cards were 2-0 down at that stage on an afternoon to forget on Mold Road, but when the roving winger went to ground as he hurtled into the area and Andrew Miller blew, there was genuine hope that the referee would point to the spot.

While 80-plus travelling fans had precious little to cheer all afternoon, Woking had the wind in their sails at that stage, the arrival of new signings Josh Neufville and Alex Wall as subs seeming to put the visitors back in the ascendancy.

But it wasnâ€™t to be. Instead the ref suggested a Loza dive, his second yellow card following, the resultant red - his second this season â€“ meaning a two-match ban. The Cards never gave up, but from there it was all about getting through to full time without embarrassment, their every attack potentially leaving them exposed at the back.

Early exchanges were fairly even, the home crowd at their most animated as Moussa Diarra lost out to striker JJ Hooper, although he soon ran out of available options, a poor pass by much-travelled Luke Summerfield the last straw.

Godfrey Poku began to exert influence and was at the heart of an attack down the left involving returned skipper Josh Casey. But again, it fizzled out, an injury to Wrexhamâ€™s James Jennings soon disrupting any flow.

Loza created an opening on the left, exchanging passes with Jake Hyde before advancing and crossing, but couldnâ€™t find Dave Tarpey in the box, while there were home shouts for handball in the opposite area after a deflected half-chance from Dan Jarvis, newly signed from Stoke City.

Then came the opener, just as we wondered if the home crowdâ€™s frustration would play a part, midfielder Summerfield â€“ until then exhibiting poor finishing â€“ his mighty 25-yard strike finding the top corner, giving visitorsâ€™ keeper Craig Ross no chance, his team-mates mere onlookers.

The Cards didnâ€™t appear overly dispirited, Jack Cook away by way of response but his move breaking down as Wrexham countered, Poku clumsily stopping them in his tracks, landing a first yellow card.
From the resultant looped in free-kick, Ross punched away, while in the next home attack, Hooper tried his luck from distance, a corner following from which Cook got a slight touch but Dean Keatesâ€™ side quickly broke, Kieran Kennedyâ€™s half-chance leading to another corner.

The lowly Dragonsâ€™ pressure continued, Summerfield and Kennedy with further parried shots while Casey did well to keep out Jarvis on the edge of the area, and Ross collected as Hooper played Mark Carrington in.

There was a brief worry as Casey received treatment near the halfway line before Lozaâ€™s first great run, home defenders hesitant as to whether to get stuck in as he strode forward before firing over from the edge of the area.

An offside flag denied Hyde as Woking pushed again, Shaun Donnellan the next to be treated after a 50/50 ball in an increasingly-disjointed affair, the home crowd unimpressed by his swift recovery.

Good work on the right by Cook and Poku led to a Casey corner, but Wrexham cleared and swiftly countered, the initiative lost. And Loza again impressed with his footwork on the left, but could find no takers for his centre, Wrexham also standing up to the next Cook and Poku raids.

Wrexham were almost in after neat touches between Summerfield and Jarvis put in Hooper, his fine effort cut out by the feet of advancing Ross. The danger hadnâ€™t passed though, Loza on hand at the left post as a shot squeezed through a crowded area from a corner, the follow-up set-piece leading to a glancing Summerfield header plucked out of the air by Ross.

Tarpey, Cook and a finally-involved Kane Ferdinand worked hard on the right as the Cards pressed in response, while Hyde was adjudged to have fouled keeper Rob Lainton in the next attack. Meanwhile, Wokingâ€™s Ross punched away form the next dangerous home free-kick, snaffling a follow-up dipping shot with ease.

And then came Lozaâ€™s first yellow for a late challenge on home skipper Shaun Pearson after a Cardsâ€™ left-wing raid, while Hyde was denied on the line with a header from a Tarpey cross, Diarra similarly close with a near-post flick soon after from a Tarpey corner.

Woking needed to do better from there and came out seemingly blazing, a Tarpey cross from the right causing home flutters within a minute of the restart, with Hyde lurking.

But the hosts were equally keen to make an impact as action flowing between ends, and it was fourth-bottom Wrexham who succeeded, Jarvis given all the space he needed for a cross-field run, his first shot parried and Youngâ€™s follow-up suffering the same fate before debutant midfielder Jarvis fired home the rebound from a tight angle.

Diarra cleared the next home attack and put away Loza, but he couldnâ€™t quite find Hyde, and nothing came of the next Poku delivery, new faces Neufville and Wall soon given green lights to join the attack.

Wall was part of the build-up when Hyde was stopped at close range by Lainton after another Loza delivery, but again Wrexham countered, Diarraâ€™s touch not enough to wrongfoot Jarvis, Ross scrambling out again, parrying then pouncing on the loose ball.

You still got the impression a Woking goal would give the hosts jitters, Lozaâ€™s continued tenacity leading to a pull-back for Hyde, but he caught it all wrong.

On the next raid, Wall was ruled to have handled in the area, while Casey delivered deep but found no takers, Wrexham standing their ground from his next free-kick too. 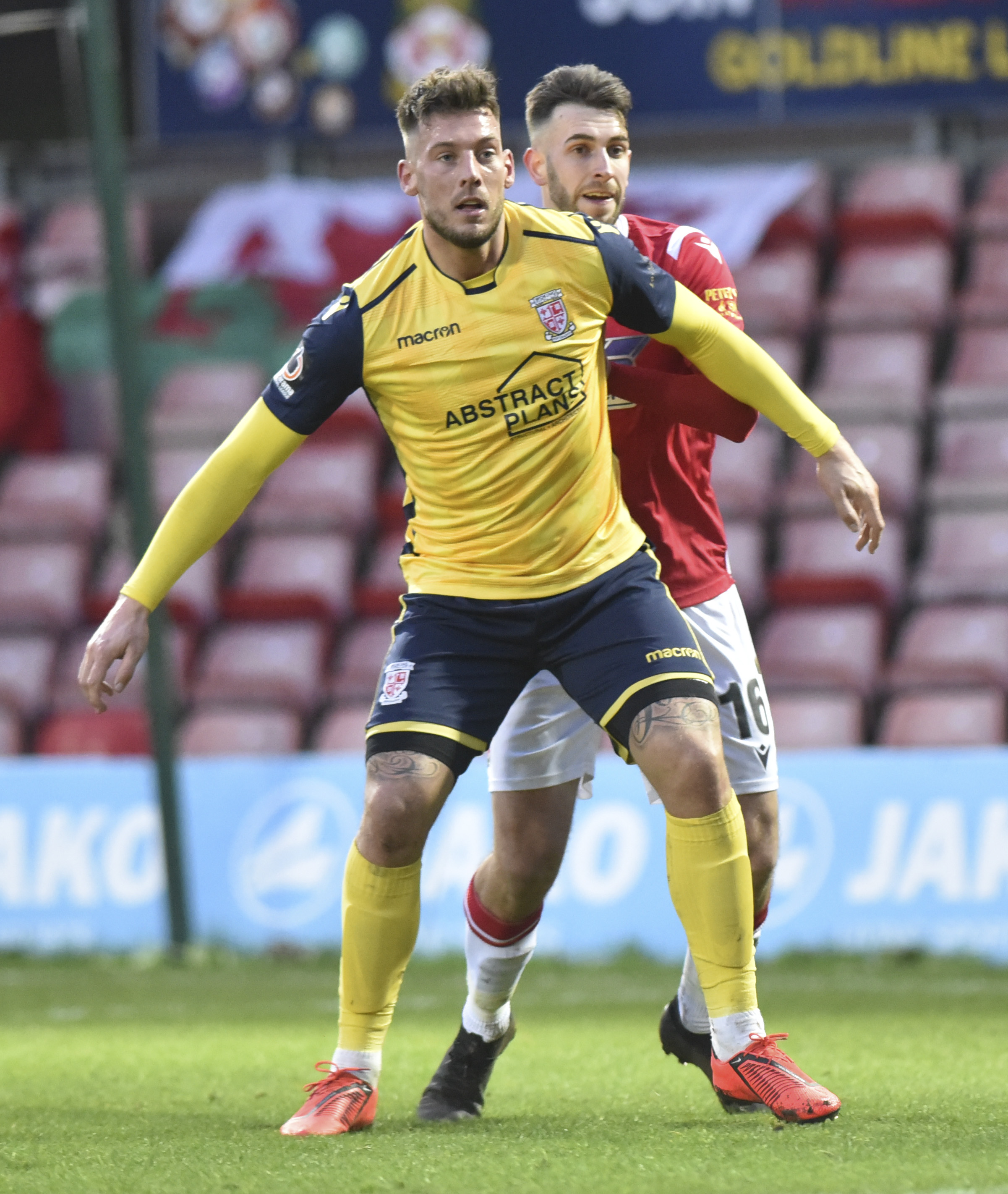 Then came that Loza dismissal, Wrexhamâ€™s belief soon growing against a 10-man Cards outfit that fought on but were regularly prone to counter-surges.

Home sub Davis Keillor-Dunn certainly threatened, although Ross had the better of him following a Hooper-inspired raid, visitorsâ€™ frustrations starting to show, decisions seemingly going the other way and distribution often poor.

The next home chance fell to Paul Rutherford but was cleared off the line by Gerring, with two further Wrexham chances from a corner also cut out and Hooper close to latching onto the next delivery, increasing confidence belying Wrexhamâ€™s league position.

And when the ball was handled in the Woking box from Youngâ€™s next effort by Cook, up stepped Summerfield, tucking powerfully away to Rossâ€™ right. Game effectively over.

Home pressure continued and Cook made a timely interception to cut out the next raid, while Ross collected low from Keillor-Dunn. Meanwhile, Cook intercepted again and charged 30 yards before finding Wall, who claimed handball as his shot was stopped by James Jennings.

At the other end, Summerfield netted again but the flag was up for a foul, his compensatory free-kick flashed wide, the same striker also finding the side-netting, damage limitation now key for the Cards.

There was still time for late home sub Tyler Reid to fire over, Dean Keatesâ€™ side surely worthy of climbing the table on this evidence, while Cook was denied by a quick-reacting Lainton at close range from the last Casey centre of note, although Wokingâ€™s hopes had long since fizzled out.

Man of the Match: Josh Casey - back from injury, the Woking skipperâ€™s no-nonsense approach and non-stop effort at least inspired some sort of belief on a day the visitors struggled to make any true impact.