Woking fought to a stalemate at the Laithwaite Stadium narrowly missing their opportunity to leapfrog Stockport.

It was a cold and bitter afternoon but the wind was less strong than in recent weeks which made for a more dynamic game. In contrast, Dowson made no changes to the team from the draw against Notts County last week.

There is always good support for Woking and none less on Saturday with a healthy 2,189 Cards fans in attendance with 310 travelling Hatters on the opposition terrace. Despite the storms in recent weeks, the pitch looked immaculate on the day.

The start of the game saw both teams battling hard with a few cold-blooded tackles flying in. Specifically, Wokingâ€™s Dave Tarpey and Kane Ferdinandâ€™s early challenges set the tone for the game.

In the 4th minute, Woking nearly had a breakthrough. Tarpey found space outside of the box and was fouled, setting up a great position for the set piece. Max Kretzschmar floated the ball into a dangerous area where Woking striker Alex Wall won the header and sent it skywards. The ball landed in the goalmouth untouched but the ref called a foul on a flapping Stockport keeper.

The deadlock was broken in the 5th minute by Stockportâ€™s Danny Lloyd. The ball was delivered into the box from a corner by Sam Walker. It ricocheted off a Woking player and fell to the feet of Lloyd who placed the ball in the bottom corner to give County the lead.

Stockportâ€™s early lead gave them confidence as they mounted more and more pressure in the Woking half.

This was cancelled out when Woking equalised in the 10th minute. Jack Cook (pictured above) launched an inviting long throw into the box. Wall proved too strong for his man as the ball landed at the feet of the striker who guided it into the bottom corner, leaving Ben Hinchcliffe rooted to the spot. 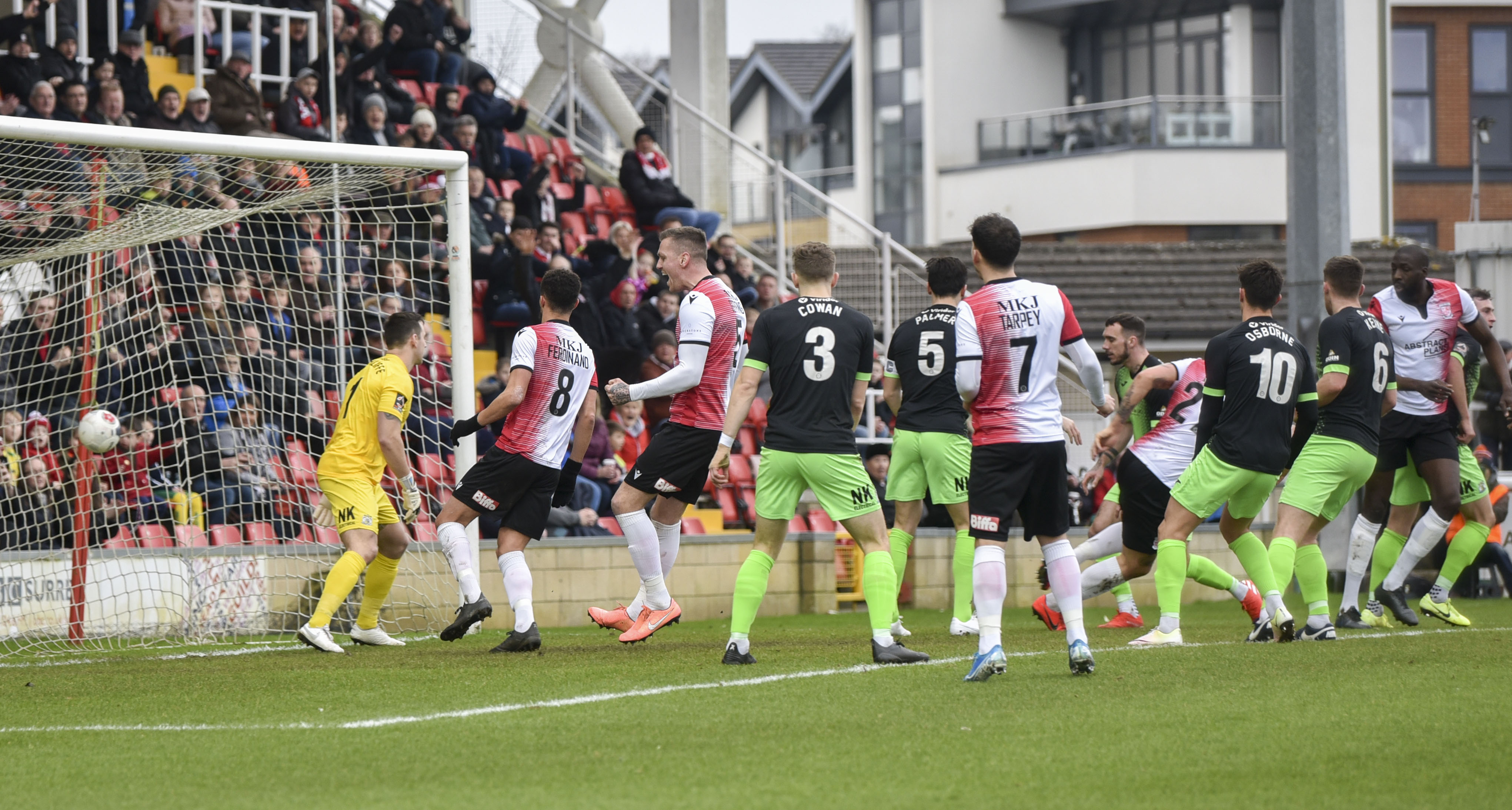 Wokingâ€™s equaliser gave them a surge of energy and momentum while Wall was proving tough to handle by the Stockport defence.

Tarpey and Jamar Loza were vital in creating space and chances for the home side. Tarpey managed to create space for himself outside the box and had a driven shot well blocked by the Stockport defence. The ball then came out to Loza who again used his trickery to make space and look for Tarpey, but the ball had too much on it.

However, Stockport managed to weather Wokingâ€™s storm after the first goal and started to look more dangerous in open play and specifically at set pieces. But Wokingâ€™s defence were rigid and stood firm.

In the 21st minute, the ball was played into the box from a corner by Stockportâ€™s Sam Walker. The ball was flicked into the air by a Stockport defender while players closed in on Craig Ross. No Woking player managed to clear the bouncing ball when it landed and eventually it was stabbed off the line and away by Jack Cook.

Kretzschmar had a growing influence on proceedings. Kretzschmar managed to find himself in space behind the Stockport midfield and played a delightfully weighted pass in between the Stockport centre backs. The ball rolled into the path of an on-running Tarpey; but the Stockport keeper was out to gather.

Half way through the first half Wokingâ€™s pressing became harder and harder to deal with by County, as the Stockport midfield were struggling to play forward which gave goalkeeper Ben Hinchcliffe too many touches for Stockportâ€™s liking.

The 30th minute saw Jordan Keane go down under the challenge of Wall which caused outrage to the travelling Stockport fans who were adamant it should have been a red card for an elbow on their defender. The ref gave no punishment and called to play on.

This controversy sparked a heated period in the game where players were tackling with greater ferocity the before.

7 minutes before the break, Woking had their best chance of the half outside of the goal. Again, Kretzschmar delivered a lovely floated ball into the box which Stockport failed to clear at the first attempt. The ball bounced around the box then landed at the feet of Loza whoâ€™s low shot was saved. The ball bounced back out and into the path of Wall who stabbed it goalwards from 4 yards out. The ball was saved again by Hinchcliffe and cleared by Stockportâ€™s Liam Hogan.

Woking continued to pile on pressure going into the break. Loza received the ball on the right-hand side of the penalty box. With a few brilliant step overs, he created space for a left-footed shot which was deflected onto the crossbar and out for a corner.

The first half started brightest for the Cards. Tarpey gathered the ball and drove towards the Stockport defence. He played a slick one-two with Wall which opened up a shooting chance which was well saved by Hinchcliffe.

Stockport continued to try and slide through balls over the top and in-between the Woking defence which nearly proved effective. A ball was volleyed through by a Stockport Midfielder which wasnâ€™t picked up by the Woking defence who had to rely on a last-ditch challenge from Moussa Diarra to prevent Danny Lloyd from running through.

Stockport again provided another scare for the Cards defence in the 55th minute. Danny Lloyd dropped deep to receive the ball and threaded a pass in-between the Woking defence into the path of Liam McAlinden who looked to be through on goal, but Diarra came flying in to make an expertly timed challenge once again and stop a shot on goal.

After nearly scoring twice, Stockport had a small period to which the Cards looked to be under the cosh. Woking were struggling to move the ball up the pitch against a sturdy Stockport defence.

Nonetheless, Woking reacted well to mounting pressure and created another good opportunity. Kretzschmar again played a lofted ball into the box where Diarra was waiting to flick the ball goalwards. The ball landed at the feet of Dempsey who was 5 yards out with his back to goal, but with not enough space to shoot the ball was cleared.

The Cards saw another chance go begging in the 71st minute when a ball was played in between the two County central defenders. Both defenders failed to take charge and clear the ball which meant Wall latched onto the pass and found himself with only the keeper to beat. Wall rushed the shot and dragged the ball wide of the right-hand post.

With 20 minutes to go, the game became stagnated and seemed to be slowing down before County nearly administered another blow to the Woking defence. Jordan Keane floated a ball towards the back post which caught the Woking defence by surprise. It arrived on the head of Danny Lloyd who beat Josh Casey to the ball but the ball was cleared.

Dowson decided to roll the dice in the 75th minute by making a double substitution. Josh Neufville came on for Tarpey and Godfrey Poku came on for Dempsey.

Moving into the final 10 minutes, the Cards managed to find a second win inspired by Kretzschmar. His deliveries into the box had caused a number of problems throughout the game and this was no different. The midfielder floated another generous ball into the box which found Cookâ€™s head perfectly, but he failed to convert.

Stockport had a chance to win it in the 91st minute when substitute Nyal Bell latched onto a stray ball from a Woking throw-in. He drove the ball goalwards and it flew centimetres outside of the right-hand post.

This was another frustrating result for the Cards as they now sit on 49 points, 4 points of the playoff position in 13th place. Stockport are on 51 points in 10th position. Woking next face Maidenhead at the Laithwaite stadium next Saturday 29th February.