Twenty minutes into Wokingâ€™s first match of the new season, a central defensive partnership that had met ninety minutes earlier was picking the bones out of a harsh penalty and struggling to come to terms with title contenders. If someone had suggested that the club would be fourth in the table in a few weeksâ€™ time, youâ€™d be laughed out of the room.

Three weeks and five games later, the Cards find themselves just there. A nil-nil draw against another playoff contender in Halifax Town is indicative of how far the side has come â€“ and how far Alan Dowson has managed to stretch a conservative, sensible budget â€“ in a very short space of time.

The form of that side has meant little need for change, with fitness and form dictating just one change from Tuesday nightâ€™s victory over Dagenham & Redbridge. Johnny Goddard returned to the starting eleven â€“ having not made that squad at all â€“ to replace Malachi Napa, with the Oxford loanee picking up a slight knock.

Halifaxâ€™s squad, meanwhile, included the returning Jake Hyde on the bench. A back three protected keeper Sam Johnson, who Hyde scored against for Woking last season.

That defensive line was a useful building block for the Shaymen in the early stages, with the visitors producing the best opposition football at Kingfield since Solihullâ€™s first half on the opening day. Wing-back Jeff King couldâ€™ve opened the scoring from a cutback from the first attack, while centre back Nathan Clarke was unfortunate not to keep a header on target from an early free kick.

The early pressure almost told, with the Halifax press â€“ inside Wokingâ€™s own penalty area â€“ forcing an early mistake from Cook. The centre-half, who has been in superb form this season, made a terrible clearance straight into the path of Jack Earing, only for the midfielderâ€™s effort to deflect off of both Saul Shotton and Craig Ross for a corner.

Having failed to threaten for fifteen minutes, Wokingâ€™s first break should have punished that miss. Loanee Slavi Spasov did well to cut out some intricate passing in central midfield as Halifax looked to build, and the young forward slipped fellow loan player Ben Dempsey into a two-on-one in the box. The midfielder faked superbly round his marker, but had to do better with the finish, firing a low shot straight at Sam Johnson to save.

Early momentum for both sides would be halted by a poor aerial challenge from Nathan Clarke, who led with his arm through the back of Kane Ferdinandâ€™s head in an aerial duel â€“ with no punishment. The midfielder needed attention for several minutes. Spasov was not one to let the infringement go lightly, and in a similar incident ten minutes later perhaps left more shoulder than he should have on Clarke - only to be booked himself.

Ferdinand wasnâ€™t to be put off â€“ operating as an important aerial â€˜out-ballâ€™ for Woking given the lack of height across the front line â€“ and he was next to miss a huge chance for Woking to take the lead. A deep free kick from Wokingâ€™s left hand side was hung up for the midfielder to knock at goal, but his header skimmed the post with Johnstone standing.

Halifax ended the half the stronger and should have converted a couple of big chances before half time. Forward Jamie Allen â€“ one of few forwards to survive Halifaxâ€™s summer business â€“ could have done better with his ball into the box following a Jack Cook slip but failed to pick out a clean target. He himself might have scored one of the goals of the week if heâ€™d converted following a nutmeg on Cook a few minutes later, only to drag his shot wide of goal.

Late â€“ and perhaps debatable â€“ bookings for Shotton and Charlie Cooper (picture above) would round out a difficult half for Woking, in which they should have scored but had also given up far more chances than their recent form would suggest. Improvement was needed.

The encouragement at half time seemed to make an impression, with Woking threatening early on. Another Cooper free kick had to be tipped around the post with men arriving, while Shotton failed to take advantage of another long ball into the box by firing into the side netting. 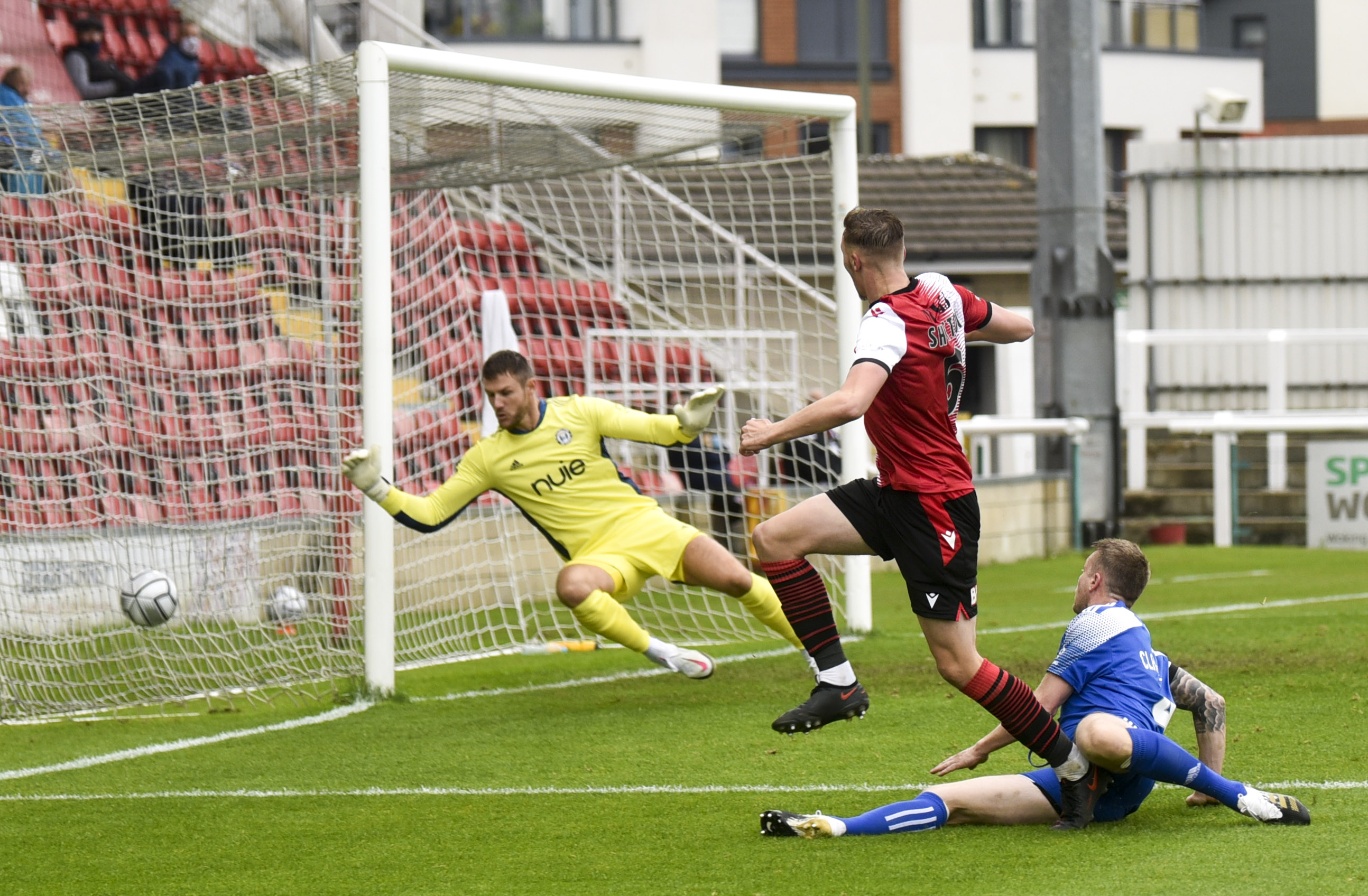 Halifax were quick to up their game, though, and had two big chances of their own shortly after kicking off. A huge cross-field ball to wide man Danny Williams â€“ who stretched the play all day long with mixed reward from his teammates â€“ was smuggled wide via both Shotton and Ross. Williams could then have won a penalty after a scintillating ball in behind from Jamie Allen put him in behind the Woking line, only for Nathan Collier to drag him down right on the edge of the area.

Feeling the tie begin to work in their favour, Halifax introduced Kieran Green and the familiar Jake Hyde for recent signing Gevaro Nepomuceno and midfielder Jack Earing. Just a few minutes later Hyde would see his name on the front of the Non-League Football Paper, but took pity on his former employers, with a whipped corner clattering off of the side of his head and over the bar.

Woking looked to make changes of their own to change the game, with Connor Hall introduced for the hard-working Spasov, Dave Tarpey replaced by Matt Jarvis, and Goddard making way for Max Kretschmar. Halifaxâ€™s defensive line remained very hard to break down, with a chipped effort by Jarvis and a blocked long-range effort from Charlie Cooper the only offerings for Woking during this period.

With five minutes to go however, the Cards were extremely unlucky not to make a claim for the three points. A Jarvis free kick from the left-hand side was only met with a fumbled punch by Johnson, falling to Cooper on the edge of the area. His powerful effort at an exposed goal was blocked superbly on the line, with the resulting bundle failing to smuggle the ball into the Halifax net.

Despite several late corners from Halifax, the visitors were unable to seriously threaten the Woking goal in the closing stages, with manful defending from the Cardsâ€™ back line seeing the game out.

The result sees Woking rise to fourth, having conceded just one goal â€“ a penalty â€“ outside of last Saturdayâ€™s freak defeat to Chesterfield. Next weekâ€™s visit to local rivals Aldershot should see several players come into the reckoning, as they attempt to claim a place in a side that is outperforming expectations at present.

Man of the Match: Saul Shotton. A huge contribution to the Woking clean sheet, combining with Ross to counter two huge chances for Halifax, and contributing immensely for a player of his age.