Woking fight back to down Dover in FA Trophy

Woking battled back against a spirited Dover Athletic side to progress into the fourth round of the FA Trophy thanks to goals from Charlie Cooper and Slavi Spasov.

Dover took an unexpected lead through Ade Azeez in the first minute of the second half, but a strong comeback from the Cards ensured they didnâ€™t slip up against the Vanarama National Leagueâ€™s bottom side, as Cooperâ€™s penalty provided the equaliser before his cross set up Spasov to head home the winner.

Woking stood firm against late Dover attacks to secure a place in the next round of the FA Trophy and defeat the Kent side for a second time in a little over a month following on from a 5-1 away win in the league.

Alan Dowson made two changes to the starting line-up that comprehensively beat Hartlepool United at Kingfield seven days earlier, with Max Kretzschmar suspended and Jack Cook dropping out of the matchday squad, which saw Dave Tarpey return to the attack and Nathan Collier slot into the defence. New signing Jamar Loza completed a strong bench for the Cards as he started his third stint at the club.

While the opening exchanges were relatively tame, Tarpey had Wokingâ€™s best opportunities to grab the opening goal, firstly through a cross from Josh Casey which he mishit, then a fierce shot from a scramble after a corner which was blocked.

Having weathered the early attacks, Dover grew into the contest, with Ahkeem Rose seeing an acrobatic effort tipped over the crossbar by Craig Ross. The attack gave the away side encouragement, with the following corner testing Wokingâ€™s backline, to show positive signs from the team which hadnâ€™t played in almost a month due to positive COVID-19 cases.

That set the pattern of the first half with both sides displaying encouraging build-up play but without a cutting edge, with Wokingâ€™s Cooper seeing a 30-yard shot deflected wide shortly before the break.

Woking were caught napping at the restart as Dover broke the deadlock within a minute, as Rose escaped down the left wing to produce a pinpoint cross for Azeez to tap in from five yards.

The rude awakening to the second half triggered Woking into a response, as they again displayed slick passing and movement to find a way through the Dover defence. Dowson also added Loza into the attack, with Tarpey coming off, to provide fresh legs on the right wing.

Woking continued to keep Dover under intense pressure through quick passing, made trickier by heavy rain arriving on the hour mark, and the persistence paid off as Kyran Lofthouse charged into the box and was tripped by Dover captain Sam Wood, giving referee Adrian Quelch no choice but to award a penalty.

With regular penalty taker Kretzschmar not on the pitch, Cooper stepped up to calmly slot into the bottom-right corner with goalkeeper diving the wrong way for his first goal of the season. 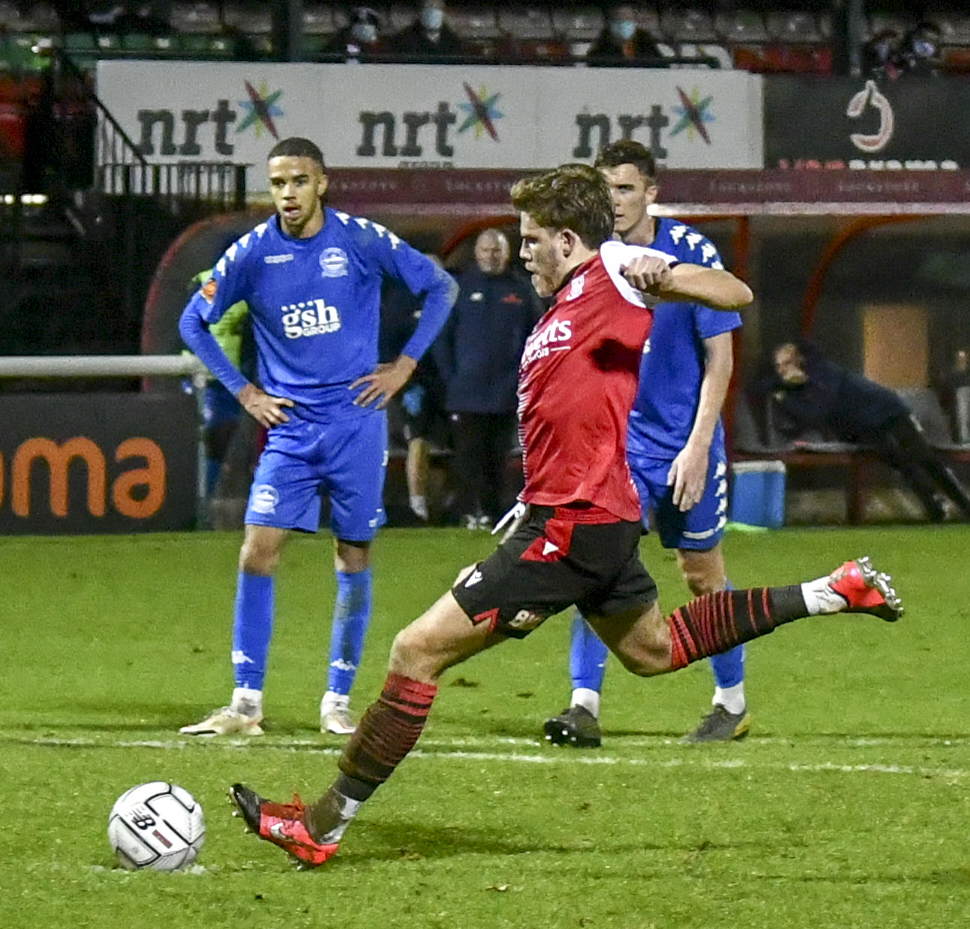 The Cards seized the momentum with a second goal just three minutes later, as Cooper turned provider with a delightful cross from the right wing to pick out Spasov, whose powerful header fired the ball into the top-left corner past Yusuf Mersin in goal to notch up his fourth goal of the campaign.

With little to lose in the cup tie, Dover bolstered their attack to find an equaliser, while Tommy Block came on for Matt Jarvis for the home side, and Dover went close to scoring again with 10 minutes to go as Azeezâ€™s powerful shot from the edge of the box was pushed over the bar by Ross.

In the closing stages the visitors were reduced to 10 men through injury when right-back Josh Passley was helped off the pitch with a suspected dislocated shoulder, with Dover unable to call on a replacement having already made three substitutes.

Dover had a late penalty claim as Nathan Collier marshalled Azeez in the box as Ross collected a through ball but the referee and linesman were unmoved by the appeals. But moments later Collier did concede a foul, this time on the edge of the box, with Omar Mussaâ€™s threatening freekick deflected wide for a corner. But Wokingâ€™s backline led by captain Casey saw out the final attacks to secure their place in the fourth round of the FA Trophy.

Man of the Match: Charlie Cooper â€“ Outstanding in midfield all game and played a vital part in both goals to oversee Wokingâ€™s comeback.
Tags
Share Facebook Twitter Print