Cards trumped in bitter conditions by a rigid Aldershot

Woking battled vigorously but were out spirited by a tough Aldershot team leaving them two points off the playoffs.

After losing to the Shots 3-0 just seven days prior, Alan Dowson and his men would have a point to prove at the empty Laithwaite stadium on Saturday afternoon.

The side looked slightly different to their 0-0 draw last game against Eastleigh. Ben Dempsey and Matt Jarvis were dropped to the bench and Jack Cook and Kane Ferdinand came into the starting line - up. The temperatures were nearing the minuses, but this did not seem to have any effect on the playing surface which was in brilliant condition.

Despite no fans being allowed in the stadium, there was still a homely feel to place before kick-off.

The whistle blew to start the game and both teams were immediately engaged in a few firm challenges, eager to win the ball back as fast as possible.

Aldershot and Woking looked to move their defensive line higher up the pitch to catch out the strikers, which meant the key to success throughout the game was to win the midfield battle.

With five minutes gone, neither side looked to have adapted to the harsh temperatures and were adamant on playing the ball in the air to gain advantages, rather than playing the ball on the floor. Early on this nearly proved to be effective, a long hooked ball from Aldershot’s George Fowler rebounded off a Woking defender and sat up invitingly for Harry Panayiotou just outside of the box, but his half volley was struck with little force and it rolled into the safe arms of Craig Ross.

Challenges were flying in with some conviction with neither side willing to surrender any territory up the pitch. The mindset from both teams came more apparent in the seventh minute when Fowler jumped in with a solid tackle down the sideline. This was combined with a Jamar Loza push and yellow card and saw the game move to the next level of liveliness.

The Shots looked to be well structured in open play, but from set pieces it was a different story. Crosses were delivered from freekicks into the box and Woking’s forwards found themselves with two free headers but were unable to convert.

With 18 minutes played, Woking looked to have settled down more than Aldershot. The Cards were first to most balls and were more focused on playing the ball on the floor. Woking’s Josh Davison was having an increasing effect on the game, holding the ball up and bringing others into play from the wide areas.

Aldershot gave Dowse’s side their first real scare when another long ball was clipped over the top of Woking’s defence and Panayiotou showed his speed and chased down the loose ball. The striker tried to get a toe on it which would have for sure taken it past Ross, but it was well collected by the keeper on the edge of his area.

More and more strong tackles were being put in while Woking had a decent amount of control over the midfield halfway through the first half. 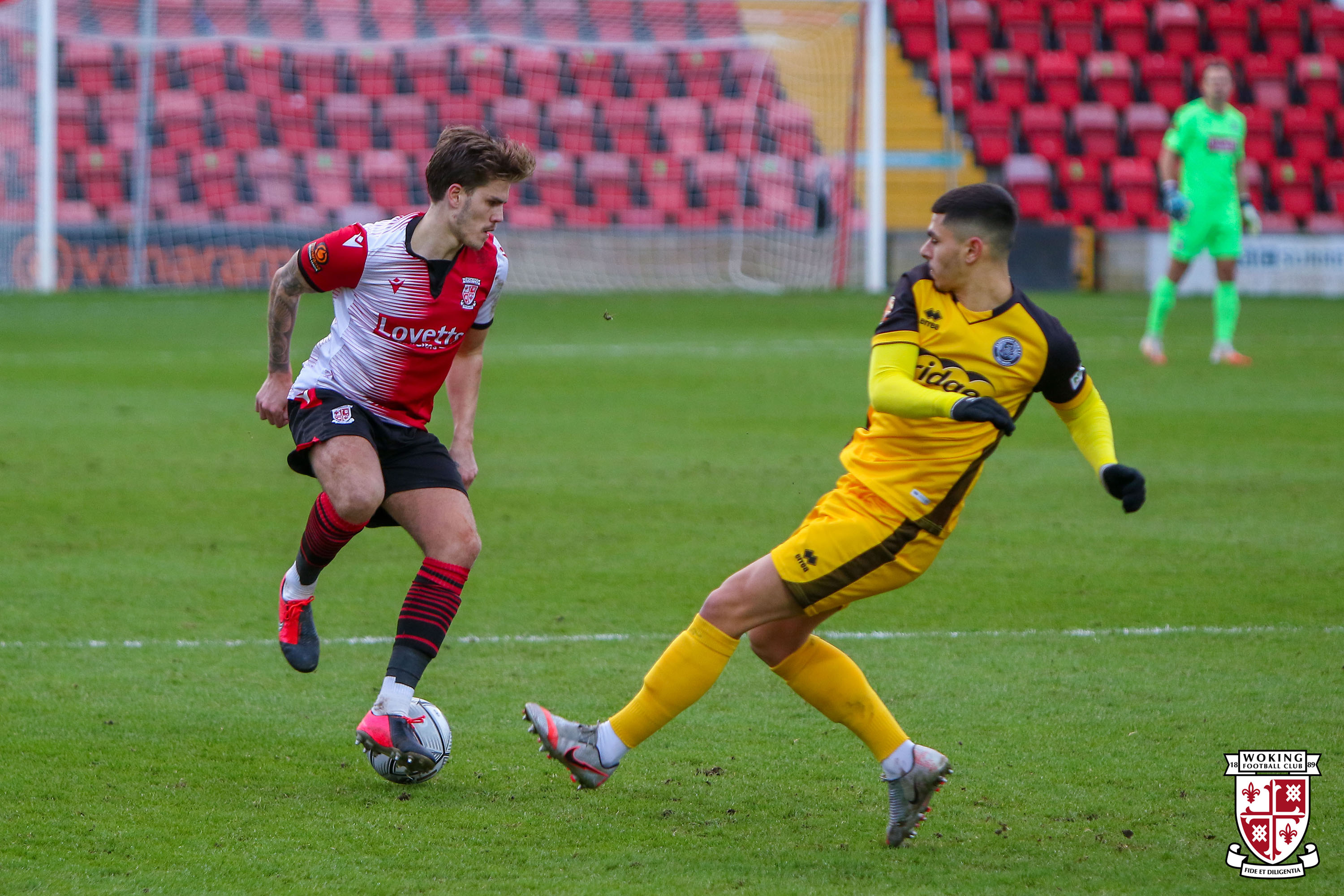 The dominance in midfield showed in the 26th minute when Kyran Lofthouse broke down the right-hand side and drove at the Aldershot defence. He delivered a brilliant driven cross towards Davison who didn’t catch the shot as he would like, and it rolled into the keeper’s arms.

The Cards continued to win second balls and this helped create space for the Woking forwards in and around the box. Loza found himself in a good shooting position close to goal but couldn’t convert his shot to open the scoring.

Woking failed to capitalise in a 15-minute period of control. Aldershot looked tired and weren’t challenging with the same ferocity. But, 30 minutes in, there was a change of momentum.

Chasing down lost balls and following through with tackles, Aldershot were now on the front foot and Joel Nouble was becoming a key element of their attack.

The Shot’s hard work nearly paid dividends when Aldershot’s keeper Mitch Walker played a long ball over. This again dropped to Panayiotou who connected better with this shot, and if it wasn’t for the bravery of Jack Cook putting in a tremendous block, it would have been 1-0.

The second half began with the same level of intensity but had a different look to it. Both teams were more focused on playing the ball on the floor and trying to gain some possession.

Davison was out of the blocks fast, hunting down the ball whenever the Aldershot defenders had possession of it. This change of style for both teams meant there was more space left in midfield. Woking capitalised on this early with Charlie Cooper and Tommy Block in the middle moving the ball wide early on.

The Cards continued to bring their defensive line up the pitch with confidence, to catch the runs in behind from Panayiotou.

However, 10 minutes into the second half, Aldershot looked to have figured Woking out. Panayiotou started to win more challenges up the pitch, but Woking’s midfield and defence continued to work as a strong unit which the Shots found tough to break down.

Using the width of the pitch looked to be the solution for the opposition team as the Cards had crowded the middle of the park and were successful in stopping passes into the striker. However, The Shots did manage to find another form of attack.

Fouls in and around Woking’s final third lead to freekicks in dangerous areas. Woking’s strong tackling proved to be a curse here and Aldershot managed to win three in quick succession. It looked to be a good opportunity for them, but Woking’s strong aerial presence prevailed here and they managed to clear each set piece with ease.

Woking were under a small amount of pressure 15 minutes into the second half and decided to go back to playing the ball winning headers higher up the pitch. Jack Cook’s passes over the top were proving tough to defend for Aldershot alongside constant pressure from Davison.

The game was balanced on a knife edge at this point and players like Cooper were putting their heads in the way of boots and braving challenges like it was a cup final.

Despite the will of the Woking team collectively, Aldershot had built up some momentum from the 65th minute, playing passes on the floor and in between the defensive line of Woking. The shots used their wide players well and got into some effective crossing positions.

With this strong spell came Aldershot’s best chance of the game so far. In the 68th minute, a lofted ball into the box rebounded off a player and bounced to the feet of Miller who was one yard out. He drove the ball on the half volley towards goal where an outspread Ross closed the shot down and brilliantly made the save.

The Cards had battled hard but looked leggy and more fatigued than Aldershot coming into the last 20 minutes.

Aldershot capitalised on this and opened the scoring in the 72nd minute. Toby Edser crossed the ball in from a set piece and the ball ricocheted off a few players in the box and found itself in the back of the net. 1-0 Aldershot.

From then on Aldershot looked the more comfortable, stopping any advancement down the pitch. Both their defenders remained attached to Davison, stopping any balls being played into the striker.

The Shots came close again when Panayiotou flicked the ball on to Josh Rees who found himself one on one with the keeper, but Ross stood big and made another tremendous save to keep the Cards in the game.

Woking piled men forward late on which left space for Aldershot to attack. They should have killed the game in the 85th minute when Rees again had another chance outside the box to put the match to bed.

The Cards had one last chance to secure a point in stoppage time. A freekick 20 yards out was whipped in and flicked across the six-yard box but there was no red and white shirt in site to tap it home.

Not the greatest of starts to the New Year for Dowse’s men but they still sit 11th place, just two points and five places off the playoff spots. Woking will look to bounce back against Wrexham next Saturday and will try and put pressure on the leading pack going into the second half of the season.

Man of the Match: Jack Cook. Strong at the back, repelling most Aldershot attacks.