During Alan Dowson's tenure, Woking FC has not had an enviable record at Gander Green Lane. Just over a year ago, shorn of captain Josh Casey, the Cards somewhat set the tone for an abysmal 2020 by shipping five goals in 43 first-half minutes on the way to a 6-2 demolition. Today's game could not be more of a change in tone, as a similarly Casey-less Cards side gritted its teeth and ground out a 1-0 victory to put itself two wins from Wembley, courtesy of an ingenious bicycle kick from loanee winger Malachi Napa.

Woking's selection welcomed a number of regulars back to the starting eleven, following a couple of surprising selections in the team comprehensively beaten by Stockport on Saturday. The expected midfield trio of Kane Ferdinand, Ben Dempsey and Charlie Cooper was restored, with Alan Dowson reverting to a back four and re-introducing Max Kretzschmar into the starting line-up. Injury to Slavi Spasov saw Jayden Wareham retain his place. The Sutton line-up included Harry Beautyman who scored the penalty-spot winner in the previous encounter at Kingfield in December.

That line-up would be disrupted barely a minute into the game, with a 50/50 between Moussa Diarra and Isaac Olaofe leaving the Millwall loanee unable to continue. Replaced by Will Randall, the personnel change seemed to disrupt the game early on, as did the plastic pitch; light rain on the artificial surface had the ball skipping around at great pace, which required some acclimatisation for the visitors.

Despite this, Woking were the most dangerous side in the early stages. Wareham, leading the line at just 17 years of age, was a focal point of the Woking offence and gave home keeper Dean Bouzanis plenty to think about with his aggressive movement and a looping header that had the Aussie backtracking. Jack Cook also represented a threat through his long throws, with an early barrage of artillery into the box almost leading to a goal; Ferdinand thought he'd scored, somehow failing to connect with a diving header in the six-yard box.

With that said, while it took Sutton a while to refocus, they undoubtedly had the best chance of the half. Following a long throw that seemed to indubitably strike a Sutton hand in the penalty area, the hosts broke quickly break with a long ball into the Woking half, and a slip from Ben Gerring on the treacherous turf put the Yellows in two-on one down the left-hand side. Tobi Sho-Silvaâ€™s quick feet forced the lone Moussa Diarra to retreat, with space opening in the centre of the pitch for David Ajiboye to duel Craig Ross one-on-one. The visiting keeper came up big to deny the forwardâ€™s delicate effort with a low save to his right.

That chance gave Sutton momentum and began their best spell of the game: a low cross from substitute Randall could've been converted but for a clearance from Ross, while a snapshot from Ajiboye on the edge of the area left Ross and the far post standing. The last fifteen minutes of the half were particularly frustrating for the visitors, not least due to several spurious decisions from the refereeing team that left both sides bemused - particularly in regard to throw-ins.

Right at the death of the half, however, Woking were able to strike a blow that ultimately won them the game. Another long throw from Cook wasn't properly dealt with by the Sutton centre-halfs, and after three chaotic headers in the box, Malachi Napa produced a frankly ludicrous bicycle kick finish to lance the ball into the top corner of the Sutton net. It was the winger's first goal in Cardinal red since his fortuitous strike against Dagenham and Redbridge, minutes before a fairly serious injury; it would also turn out to be the goal to put the Cards two wins from Wembley. 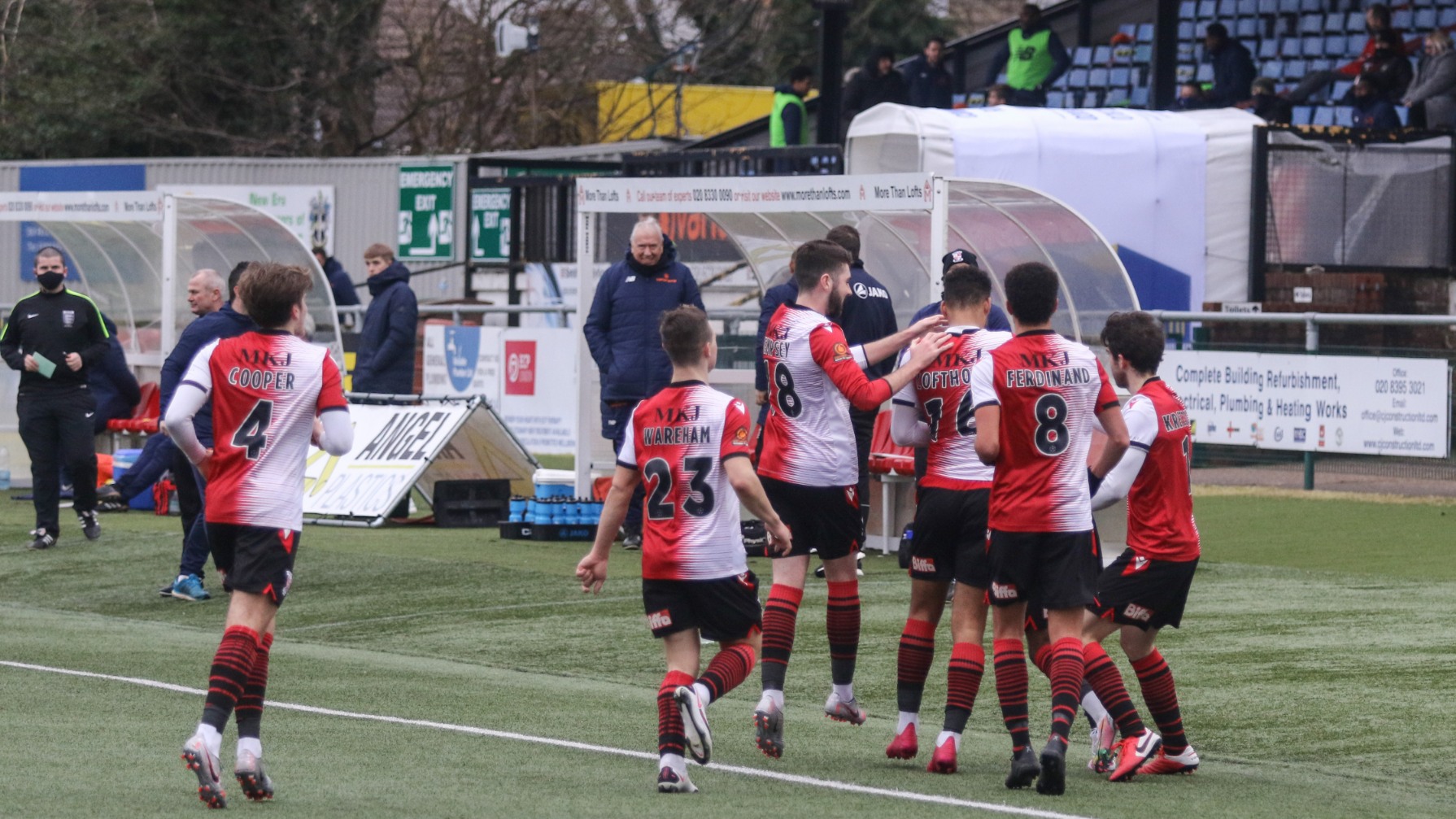 The second half was something of a sparring match, with both sides struggling for clear-cut chances. Sutton's compact, well-drilled 442 began to transition into a more aggressive 4-2-4, ultimately leaving just two centre-halves back on the attack; Woking, meanwhile, dropped from the first half's 433 into a more conservative 4-1-4-1, with Cooper most often handling the responsibility of screening the back line. Short goal kicks into Jack Cook used by Woking to push Sutton's two banks of four deeper into their own half, opening up space for the Cards to attack on both flanks, while the home side looked to move quickly and directly into their pacy forwards as soon as they won the ball on the counter.

Sutton could have gained parity within five minutes of the restart but for a superb recovery slide from Moussa Diarra in his own penalty area, while his defensive partner Ben Gerring headed away a cross that would have offered a tap in for Ajiboye. At the other end, a Kretzschmar free kick only needed an assertive header to double Woking's lead; after a tense bout of head tennis, Diarra scuffed a low effort wide of Bouzanis' post.

Injuries would again be a problem for Sutton in the second half, with first-minute substitute Will Randall stretchered off after a clumsy aerial collision with Kretzschmar, for which the midfielder was booked. As the half went on and the game was increasingly stretched, more changes were needed. The hosts rolled their remaining dice with the introduction of Omar Bugiel for Tobi Sho-Silva, while Woking would respond with their first change, replacing goal scorer Napa with the returning Jamar Loza.

The last fifteen minutes were something of a strategic masterclass from the visitors, keeping the ball in safe areas and using the time up very effectively. The closest the home side would come was a long, low ball in behind the Woking line that Gerring chose to leave for Ross; the keeper had to slide out to clear the ball for a throw ahead of Ajiboye and had some choice words for his teammate. Woking doubled down on their approach five minutes from time with the withdrawal of Wareham - an early finale to a performance characterised with hard running and brave duels - for recent signing Jonte Smith.

Smithâ€™s introduction was aimed to help run down the clock and keep the pitch tight, and the Bermudan put in a huge amount of effort on the ball to keep Sutton at bay in the closing stages, putting on his best 'Greg Luer' impression during added time to wrestle control of the ball in Sutton's corner. Beyond that, it was a frustrating half for Sutton, with centre-back Louis John booked late on for an unnecessary barge on Smith. Bugiel avoided similar punishment for catching Diarra with his studs in the dying moments.

Regardless of the physical hardship, Woking's win over a team that has already beaten them with a clean sheet at Kingfield was a phenomenal response to the drubbing by Stockport on Saturday. Assistant manager Ian Dyer called the performance "an Alan Dowson team; full of heart, full of desire, of endeavour and intensity." The clean sheet was a vast improvement, as was the creativity in midfield, and the Cards will hope to hit a similar standard of performance when they return to Gander Green Lane for the National League game on Tuesday.

Man of the Match: 31-year-old Moussa Diarra. On a day where any one on five or six players could claim MoTM, the Frenchman put in the sort of performance that has made him such a popular figure at Kingfield in recent times. Totally dominant in the air in both boxes and a calming presence at the back, making several significant tackles to ensure the clean sheet.