For the first time since 7th March 2020, Woking fans could finally travel to see the Cards live away from Kingfield. The pitch was in immaculate condition and the scene was set for the 400 or so Woking fans that made the relatively short trip to Grosvenor Vale.

There were several familiar faces in the opponents starting lineup in the form of Jack Cook, Charlie Cooper and former loanee Dennon Lewis. Woking welcomed some new faces, some old faces and some “new-old” faces to the starting XI as the seasons curtain raiser got under way. The Cards welcomed back old fans favourite Joe McNerney and Inih Effiong following some time away from the club. Kyran Lofthouse made his debut as one of our own following his loan spell last season.

Solomon Nwabuokei, Jordan Maguire-Drew, Tavhon Campbell and Rohan Ince completed the list of debutants taking to the field alongside the old guard from last season in the form of Craig Ross, Josh Casey, Moussa Diarra and Max Kretzschmar. There were new faces on the bench in the form of Tom Champion, George Oakley and Tayrun Allarakhia alongside former loanee Tyreke Johnson and keeper Mark Smith. There was no room in the matchday squad for Jamar Loza as he continues his recovery from injury.

The game got underway with the Cards shooting down the slope. It didn’t take long for Woking to create the first opening of the match with Campbell finding Effiong on the edge of the area, who took the ball down well, turned and got his curling effort off towards the bottom corner, only for the Wealdstone keeper to get a good hand to it and push it wide of the goal.

Moment later, Effiong made another one of his bustling runs down the right flank expertly holding off the challenges of two Wealdstone defenders before firing a rasping effort over the bar. The attacking play didn’t stop there as with only 11 minutes on the clock, Woking carved out another opportunity. Some kind interplay between Lofthouse and Max on the right hand side saw the ball fall to Maguire-Drew who beat one man to fire in a shot that the keeper did well to save and keep a hold of.

Despite the Cards dominating the opening exchanges, Wealdstone managed to register their first real effort on goal after 15 minutes. The former Torquay and Ebbsfleet man Josh Umerah made a nuisance of himself going past Josh Casey before shooting wide from a tight angle. 5 minutes later and the warning signs were there again as Wealdstone broke quickly form a Woking corner with Dennon Lewis using his pace down the left hand flank to fire a shot over the bar.

They say there are fine margins in football and so that proved to be the case. Within 60 seconds of that miss, Woking worked the ball well down the left hand side. Casey pulled the ball back to Inih Effiong on the touchline, whose cross was inch perfect for Max to open up his foot and side foot into the net for the opening goal of the match and the season. 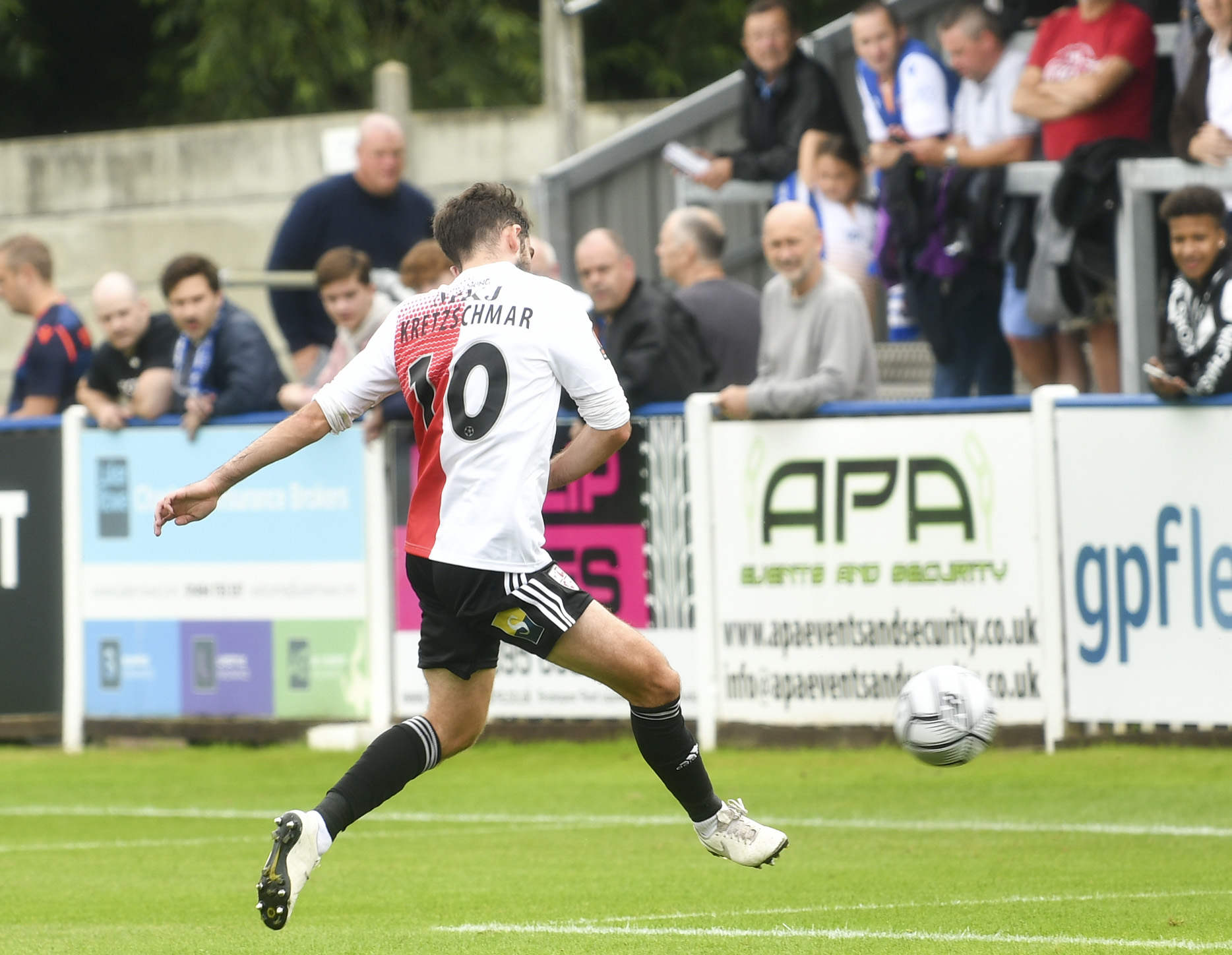 Like buses, you can hang around for ages for the first and then you get two in quick succession, and that is exactly what happened for both the Cards and Max. Some excellent work down the right hand side saw Jordan Maguire-Drew cut inside and cross the ball onto the head of Max who cushioned the ball down into the bottom right hand corner. In the absence of the dubious goals panel, Max was credited the goal and the Cards were 2 up.

Two could nearly have become Three for Woking had it not been for the linesman adjudging Campbell to have crept offside after a lovely ball over the top from Ince. Tahvon took the ball down serenely and rounded the keeper before play was pulled back.

After the first half an hour or total domination, Wealdstone came back into the game just before half time with two efforts from Browne being blocked out and tipped over the bar by Craig Ross. A booking for both Jack Cook and Joe McNerney saw the action out until half time with the cards holding a thoroughly well-deserved lead.

The Cards remained unchanged for the start of the second half with Wealdstone bringing on Alex Dyer in midfield. Despite a bright opening 5 minutes, Wealdstone took the game by the scruff of the neck and started to impose themselves. With the slope now in their favour they went on the attack and a dangerous cross in from Dennon Lewis from the left hand flank went all the way across goal before Josh Casey was able to tidy up.

Moments later, Umerah had another decent effort deflected wide as he looked to turn and volley goalwards fortunately for the cards, the corner came to nothing.

The game started to get a bit niggly with Max being booked for a trip on the breaking Dennon Lewis. Despite a few half chances from Woking, Wealdstone again created another chance with Dennon Lewis skipping past two defenders, before man mountain Ince stepped in to avert the danger.

A late flag from the linesman denied Inih the chance to make it 3-0 as the Carda made their first change of the afternoon with little over 20 minutes remaining as Allarakhia replaced the impressive Maguire-Drew. Almost instantly after this change, Wealdstone had a goal back. Joe McNerney played a poor ball put of defence that allowed Lewis to cross over. The ball beat everyone but Eletheriou kept the ball in on the right touchline, whipped in a good cross and Umerah rose highest to head into the top corner.

After a warning from the referee to Max, Woking made a second change with Tom Champion coming on to make his debut to replace Max as the Cards reverted to a back 5 to try to nullify the Wealdstone attacking threat. A decent effort from Tavares for the hosts was blocked by Moussa with the resulting corner being dealt with comfortably by the visitors.

With 7 minutes remaining, Woking gave a debut to George Oakley as he replaced Tahvon Campbell for the closing stages. Wealdstone continued to press but the defence stayed resolute with a couple of blocks from Champion and Moussa. The last chance of the match fell to Dennon Lewis who shot harmlessly high and wide and for the 5th season in a row the cards had 3 points on the opening day.

Overall there are some hugely positive signs. Rohan Ince looked immense in midfield, Maguire-Drew looks like he will cause opposition defences problems all season and Inih Effiong was a handful up front. The defence looks more solid with Joe McNerney and Moussa heading most things that came their way away. With players still to return from injury and competition for places there are plenty of reasons for the Cards to be optimistic for the coming weeks. There were some warning signs in the second half as we seemed to back off a bit but as far as opening days go this was a job well done.

Man of the Match: Rohan Ince – he absolutely bossed the midfield with his presence and didn’t put a foot wrong all game
Tags Match Report
Share Facebook Twitter Print