After going away to Nottingham, and putting 4 second half goals past a team, tipped by many to be in the promotion picture come May, Woking welcomed another of the league’s strongest teams to the Laithwaite Community Stadium on Tuesday night. The Daggers came into the game as top scorers on 24 goals and flying high, with the Cards looking to ignore the early league standings and upset the odds for the third match in a row.

On a clear, fresh October evening there were 2,226 watching on as Dowse fielded an unchanged line-up, no doubt aiming to see a repeat performance three days after the demolition of Notts County. The Dagenham side included former Cards loanee Matt Robinson and Joey Jones, who racked up a total of 200 appearances in the red and white of Woking before he left for Eastleigh in 2018.

The game started brightly, although the first chance of the game fell to the Daggers. With two minutes on the clock, Dagenham’s corner made its way through to Vilhete who, despite his stature, managed to leap highest, but saw his header loop over the Woking goal. Craig Ross quickly turned defence into attack and his goal kick ended up at the feet of Kyran Lofthouse, who did well to move the ball forward down the Woking right, combining with Rohan Ince whose low shot from the right hand side of the area ended up in the side netting.

That early exchange set the tone for an end to end first half, as the energy and attacking intent of both sides was clear. With neither team managing to get a real foothold, the next chance of the game fell the way of Dagenham’s Josh Walker on 11 minutes, who found space on the edge of the Woking box after showing some quick feet. He managed to get a low shot away, but Ross comfortably gathered down to his right.

Woking, aiming to make their own spells of pressure tell, were looking to create opportunities for the in-form Tahvon Campbell. His first real chance came after 13 minutes as a Josh Casey cross looped over to the back post. Campbell managed to get his head on it, but the header ended up lacking the power to trouble Elliot Justham in the Daggers’ goal. Campbell didn’t have to wait long for his next opportunity as he got on the end of another cross this time whipped in from the right by Max Kretzschmar after a period of sustained pressure. With the crowd on their feet, Campbell could only screw his shot wide of the post.

As Dagenham looked to turn the game back in their favour, the game was stopped briefly as a foul on Moussa Diarra saw him fall awkwardly. With the physio on, there was some worry that he would be forced off but, after liberal application of the magic sponge, Diarra was back on his feet.

On 19 minutes, another Woking attack and another Kretzschmar cross offered opportunities to both Campbell and his strike partner Inih Effiong, with Effiong managing to get a foot to the ball, but he couldn’t bundle it past Justham. There was no let up as both teams pushed forward and on 27 minutes Ross was called into action again as the Daggers broke and Sagaf’s shot deflected off Diarra.

Woking immediately pushed back once again and Casey, energetically getting forward, was tripped around 35 yards from goal. Casey took the resulting kick himself and after the Daggers struggled to clear, the ball ran free. Kretzschmar ran on to it and was tripped by the Daggers’ Mo Sagaf well inside the box. This season, it’s fair to say that the refereeing decisions haven’t been kind to the Cards, but today’s man in black, Jacob Miles, clearly hadn’t had the memo and pointed to the spot. Kretzschmar stepped up confidently to take Woking’s first spot kick of the season and converted emphatically, firing in to the top right corner, leaving the Daggers’ keeper with no chance, 1-0 to Woking. 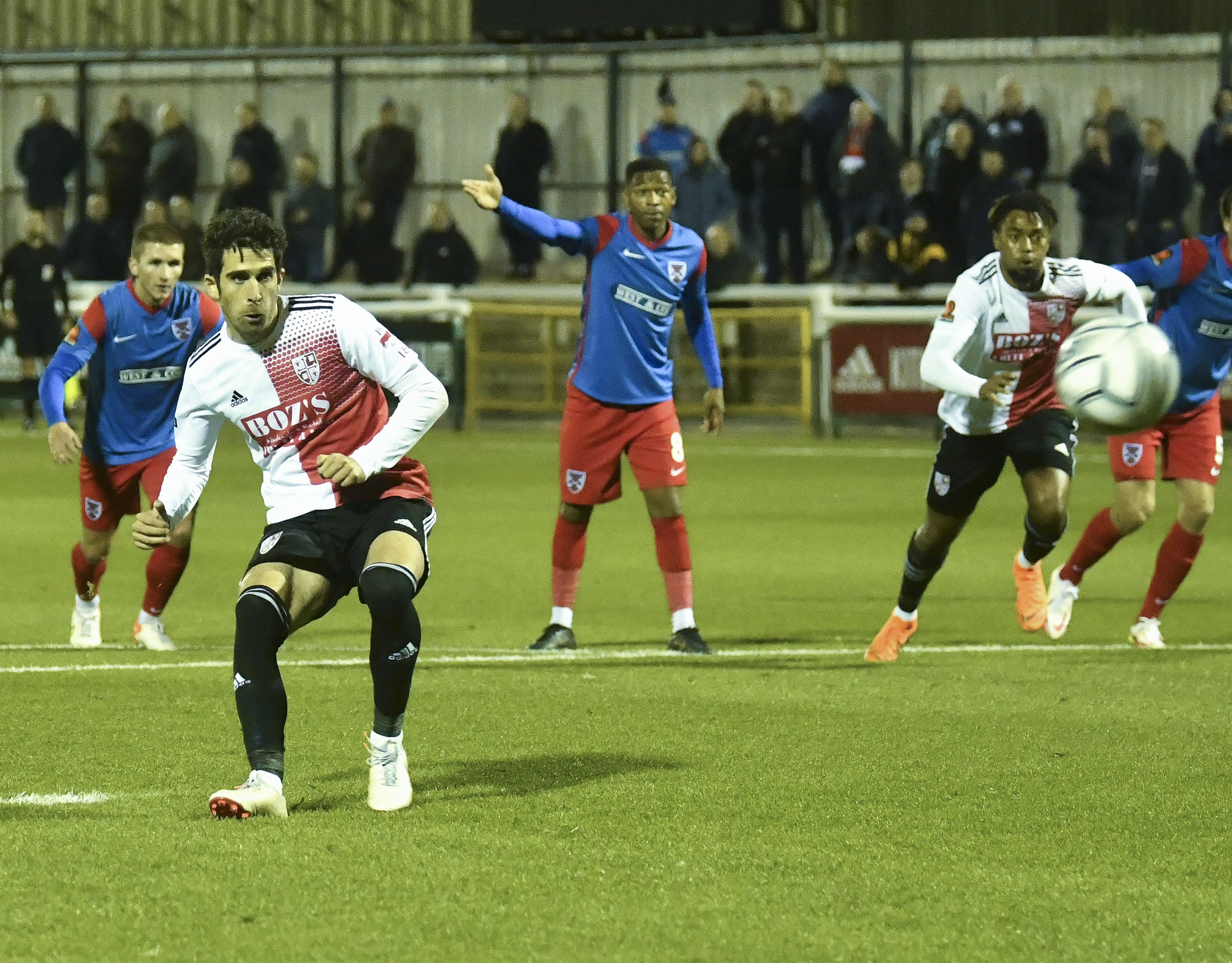 The penalty did little to change the flow of the game and on 34 minutes, the Daggers were back on the attack. Former Cards favourites Joey Jones and Matt Robinson combined with Jones feeding Robinson, although his effort which looked destined for the top corner was spectacularly tipped over by Ross, who was looking unbeatable.

Both sides continued to probe, with the attacks leading to nothing until Joe McNerney, with 42 minutes on the clock, bundled into Paul McCallum around 25 yards from goal. Will Wright, always dangerous in dead ball situations smashes his effort against the underside of the bar with the ball bouncing on the line before being cleared. With hearts in Woking mouths, the relief could be felt around the stadium, until just two minutes later Diarra committed an almost identical foul just a couple of yards further out. This time, Wright’s harmless effort struck the wall and was cleared.

Following a chance to regroup at half time and an unfortunate injury shortly after the break which meant goal-scorer Kretzschmar had to be replaced by Kane Thompson-Sommers, the balance of play started to shift in the Daggers’ favour.

With Woking increasingly restricted to counter-attacking football, the best of the chances were increasingly falling the way of the Daggers. On 48 minutes Sagaf broke free and flashed his shot wide across Craig Ross’s far post. On 52, McCullum was put in through the middle by Walker, and with no one ahead of him but Ross his resulting shot was high, wide and far from handsome.

With Ross comfortably dealing with everything coming his way and demonstrating his willingness to gather in the Daggers’ attempted crosses, on 56 minutes Lofthouse once again managed to use his ability on the ball to break down the right before being brought down by the Daggers number 20, Mauro Vilhete. This opportunity at respite was wasted however, with the cross cleared by the first man.

The pressure from the Daggers continued but rarely led to any real threat on Ross’s goal as Woking had 10 of their 11 men behind the ball for much of the half. The Cards’ brief forays forward typically petered out at half-way, meaning Campbell and Effiong were feeding on scraps and struggling to make an impact throughout the half.

There were two half hearted appeals from Daggers for penalties as the half wore on, before a corner led to a rare Woking opportunity. With around 68 minutes gone, the corner was cleared before being put back in. Campbell, with his back to goal had to think quickly and opted for the spectacular. Close to goal his overhead kick ultimately saw the ball fly some way over the bar. With 20 minutes remaining, Dagenham manager looked to affect the game further, bringing on Angelo Balanta and Myles Weston to replace Sagaf and Vilhete.

As the remainder of the half played out in a similar vein, Woking and their excellent back three continued to stand up to a Dagenham attack which has proven to be lethal this season. With 90 minutes on the clock, 5 minutes of added time were shown by the fourth official. There was enough time for one more Woking break as Solomon Nwabuokei’s energetic burst of speed through the middle set up a chance of Effiong to break, but he couldn’t get the ball under control. The game eventually finished with a Daggers corner which saw ‘keeper Justham go forward, but once again Ross came out to claim and ensure the Cards made it three wins out of three.

Man of the Match: Craig Ross chosen by match sponsors Great Annual Savings after standing out in an excellent team performance.

You can check out Great Annual savings here