No steal involved as Magpies take away all three points 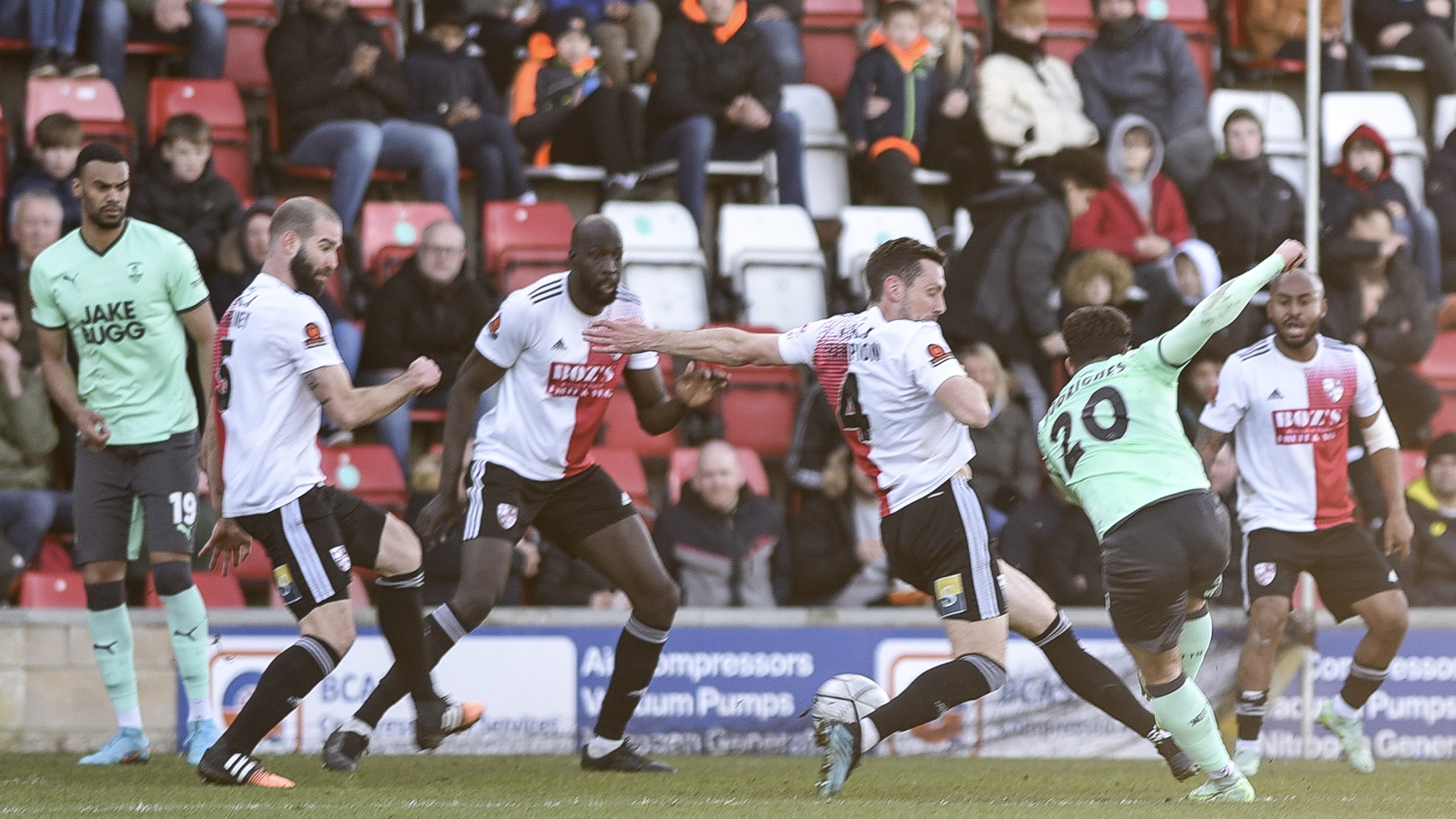 On a predominantly sunny, cool and still breezy late February afternoon, Woking took on in-form promotion hopefuls Notts County at the Laithwaite Community Stadium, looking for a change in their fortunes at home. Unfortunately, it was not to be as the Magpies gradually took over – from the point where Kyran Lofthouse experienced a game-ending injury - and retained control of the game, scoring in each half.

There was only one change to the Cards starting up line-up compared with that of the previous Tuesday night when they ca me away from Dagenham and Redbridge with an honourable draw. Josh Casey returned for Rohan Ince, who was starting a 3-match ban, and regained the captain’s armband from Tom Champion, with Joe McNerney returning to the bench. Notts County also made one change, with the impressive Aaron Nemane in for the injured Callum Roberts.

The visitors kicked off towards the Leslie Gosden Stand. Woking lined up with 5 at the back, with Tyreke Johnson and Lofthouse on the flanks, and Casey in central midfield. An early County attack resulted in a free kick in from of Moaner’s’ Corner; Ed Francis curled the ball in but it was cleared.

In the 3rd minute, the Cards advanced down the left, with Tarryn Allarakhia and Inih Effiong exchanging a 1-2 before the former was fouled. Johnson floated his free kick into the box but Allarakhia’s volley went into orbit.

A brief jinking run by Johnson ended with a County defender being penalised; his freekick was headed out. 11 minutes in, another Woking attack was ended just outside of the box. The game was evenly competed at this point, with the Cards perhaps having a slight edge.

A good run by Solomon Nwaboukei led to a pass to Lofthouse who was brought down and injured; he received attention from the physio. 3 minutes later, he went down again; clearly struggling, his game was over at that point as he limped off.

Woking reorganised, with substitute McNerney going into central defence and Annesley moving out to right back. Lofthouse’s departure was, however, pivotal and the Magpies began to exert their influence over the game. A forward movement ended with a tame lob by Ruben Rodrigues into Craig Ross’ arms.

On 25 minutes, the largely ineffective Nicke Kabamba was penalised after a ‘collision’ with County’s No. 2, Richard Brindley, who went down, with Kabamba receiving a yellow card.

Following a Diarra throw-in near Moaners’, County gained a corner; Francis’ innocuous long, high ball cleared those in the area.

It was a County player’s turn to go into the ref’s book, as Sam fouled Casey on the right. Another Johnson freekick was overhit. Nwabuokei also saw yellow in the 34th minute for an indiscretion in front of the baying County fans in the CLT. 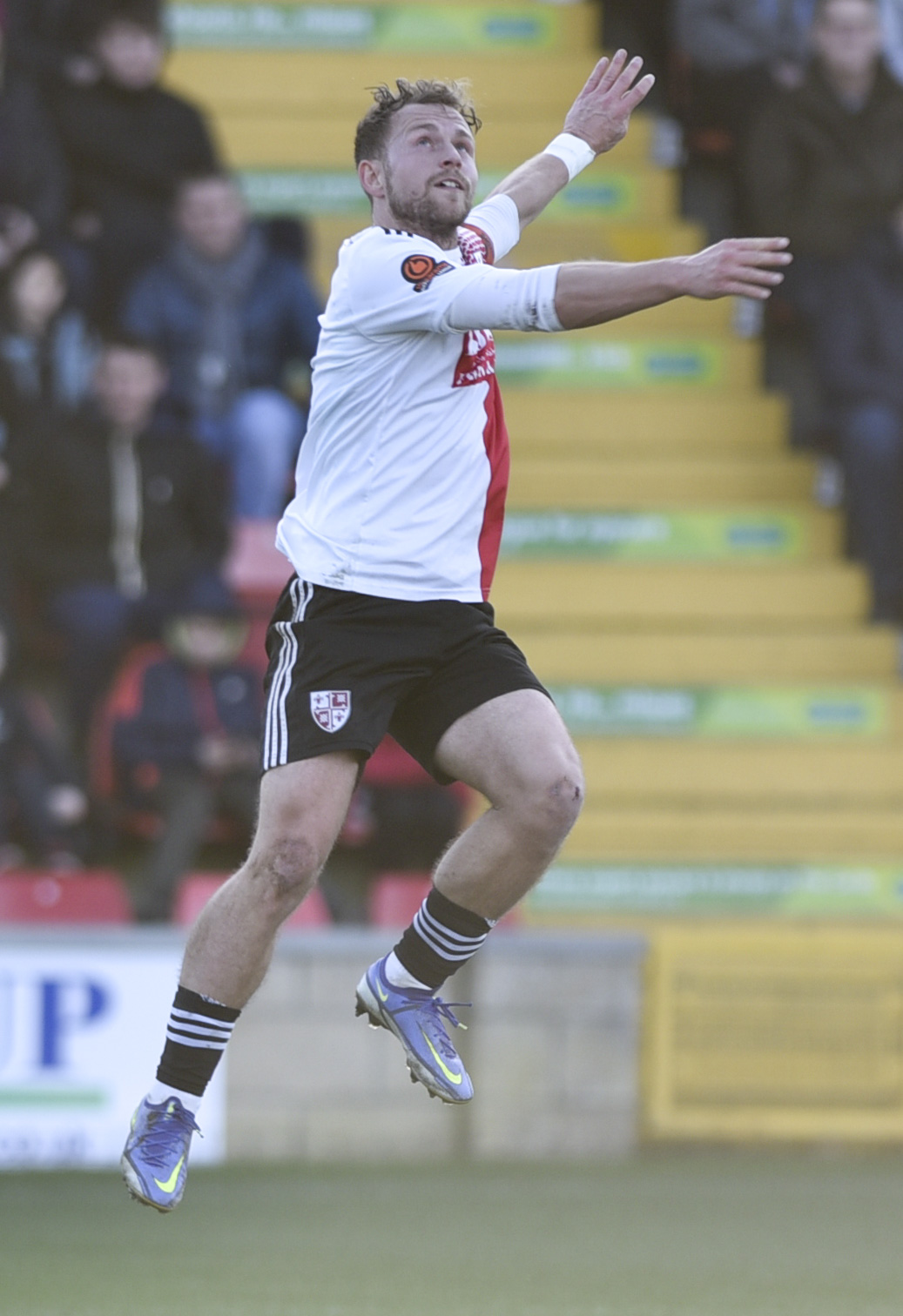 A long ball dropping over his shoulder was volleyed by Rodrigues just wide of Ross’ goal – the closest County had come to scoring. However, they made amends a minute later. The ball arrived at Rodrigues’ feet following an exchange between Matt Palmer and Nemane and he tucked it away with his left foot in the corner of the net to Ross’ right. 0-1.

In the 4 minutes added on, a dangerous run by Jayden Richardson secured another County corner.

Woking switched to 4-men in defence at the start of the second half, with Casey moving to left back and Johnson moving upfield. However, the Magpies continue to assert the dominance that they had established in the latter part of the first 45 minutes.

A long ball reached Richardson on the right. His centre was turned out for a corner, from which a looping header went over the bar. Wootton turned, with the ball, on the edge of the area and fired in a shot which was turned away by Ross for another corner. There was little respite for Woking as County’s game showed increasing confidence and fluidity.

In the 63rd minutes, Dowse made two changes, bringing on Max Kretzschmar and Jamar Loza for Kabamba and Nwaboukei. There as an extended delay around now, as the referee had, what ‘word of mouth’ suggested, was a problem with either an injury or an earpiece – or maybe both?

A dangerous County break by Nemane on the right finished with a shot from an angle that Ross did well to palm away; another corner ball drifted over and out. County got a free kick after Kretzschmar and Loza ‘tussled’ with opposition players over by the CLT.

Then, on 76 minutes, another Magpies attack, and more shaky Woking defensive work, finished with Sam blasting the ball into the net to Ross’ right, to the delight of the visiting fans. 0-2; game over.

Diarra went into the book for a foul on Richardson. With a view to securing their win, County made two substitutions – Frank Vincent and Kairo Mitchell on for Nemane and Francis respectively.

The extended delay and other interruptions meant 10 minutes of time added on. Woking managed to get a couple of free kicks near the County goal. From one of these, Kretzschmar’s misplaced ball which fell into the arms of County’s on-loan keeper, Vitezslav Jaros, was as close as Woking came to a ‘meaningful’ shot throughout the game, apart from another tame lob. A couple more attacking forays from the visitors and that was it.

‘All I Need’ is a song by Notts County’s shirt sponsor, Jake Bugg. From Dowse’s perspective, ‘All I Need’ means a return to a run of results that is at least half decent. This will probably require a few lucky breaks, a few less defensive mistakes (preferably none), and a bit more organisation and composure. He has the players that can do that do that, and there are games coming up that look winnable on paper; however’, on grass’ tends to be a different matter. It would be a great start if they can come away with a result from the very difficult looking trip to Grimsby, against another in-form team, up next.

Sponsor’s Man of the Match: Tarryn Allarakhia Industrious, energetic, ultimately fated to be on the losing side.

You can check out Caulfield Search here