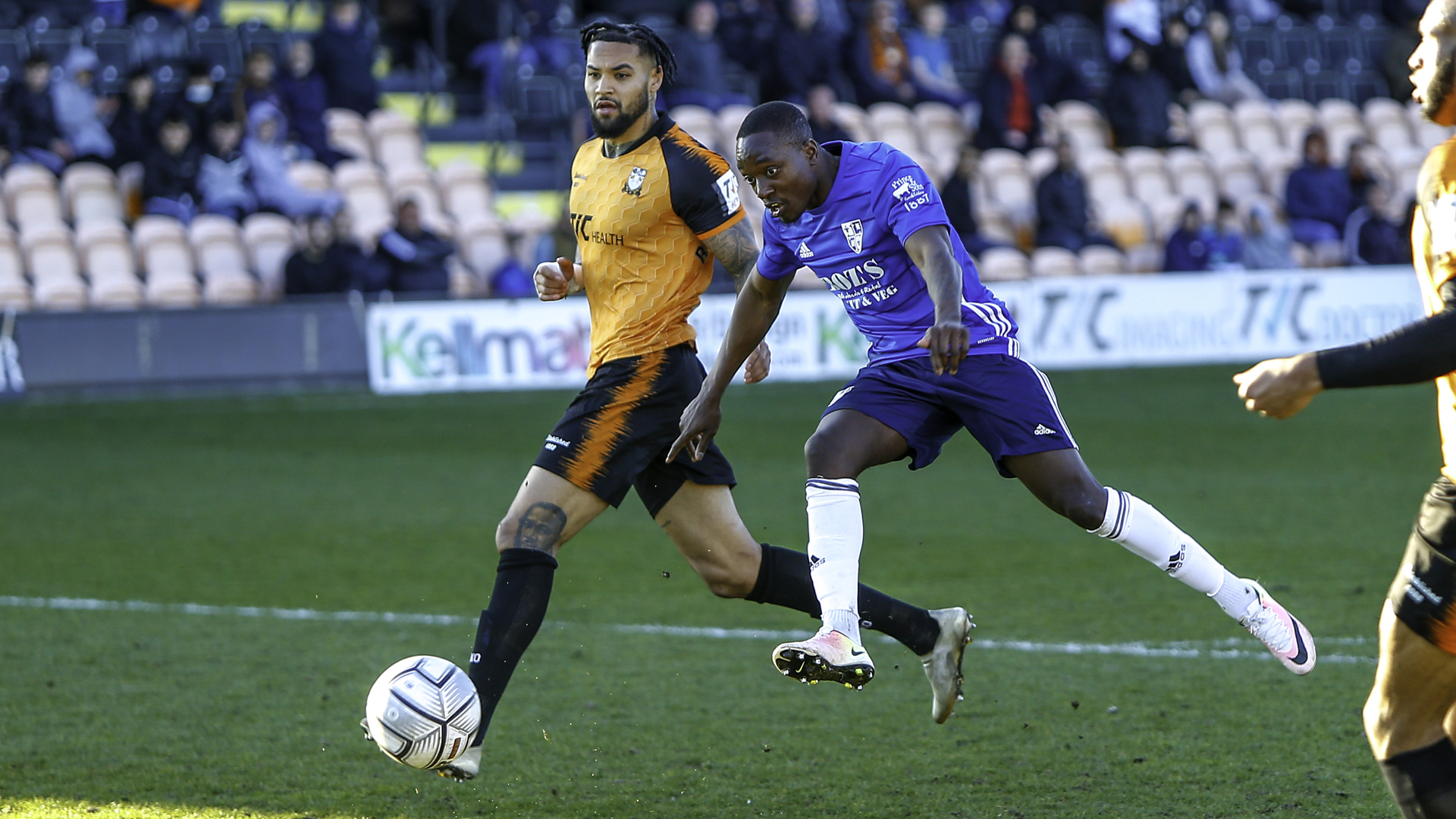 The last time Woking travelled to the Hive, the game finished 2-0, with goals from Jamar Loza and Moussa Diarra securing all three points. Not many people would’ve predicted the same scoreline and the same goal scorers on this sunny March afternoon in North London.

Ian Dyer made just two changes from the dramatic 1-0 win against Maidenhead United the week before, with George Oakley and goal scorer Nicke Kabamba replacing Jamar Loza and Inih Effiong, who dropped to the bench. Dean Brennan’s Barnet had recorded an excellent 1-0 win over Boreham Wood on Tuesday night, however, former Woking forward and in-form Bees striker Reece Grego-Cox missed out through injury having got off to a flyer in North West London over the last couple of weeks.

On a glorious afternoon in Edgware, Barnet started the brighter of the two sides, with Ephron Mason-Clark trying to set the tempo. After being played through on goal with just six minutes on the clock, the England C international’s low shot was excellently saved by the feet of former Bees keeper Craig Ross. Following a succession of corners, Woking managed to counter, and Tyreke Johnson drove towards goal, unleashing a fierce shot which had to be tipped over by Aymen Azaze for the Cards’ first corner of the game.

Max Kretzschmar’s delivery to the back post caused chaos as Azaze lost out to Oakley in the air, and the ball fell to Diarra, who poked the ball into the back of the net to spark jubilation from the Woking fans assembled behind the goal.

A few minutes later, Ryan De Havilland’s shot from yet another Barnet corner flew wide, and the midfielder was at it again minutes later, his delivery from a free kick almost finding Jamie Turley at the back post. Barnet were consistently getting free kicks just outside the box, and the experience of Tom Champion and Diarra appeared to be showing on many occasions.

Mason-Clark was first into the book just past the half hour mark, his late challenge on Kretzschmar earning himself a yellow card, and the forward tested Ross in the Woking net again with a low drive a minute later.

As half time edged closer, a poor clearance from Azaze saw Johnson find Rohan Ince, but his shot following a neat turn was well blocked by Stevenage loanee Ross Marshall. Half time came shortly after, with Woking quietly content with their 1-0 lead.

After half time, it took both sides a bit of time to get up the pitch and attack, with the game turning into something of a midfield battle.

However, with ten minutes of the second half gone, Barnet saw Mason-Clark finally put the ball past Ross, only for the referee to signal for a free kick to the Bees on the edge of the box instead following an earlier foul. Rob Hall was over the free kick, but the former Oxford United winger was denied by Ross, who parried the ball away from danger.

Johnson made way for Jamar Loza with almost seventy minutes played, with Barnet also making a change, Hall being replaced by Louis Walsh, as Dean Brennan looked to find the X Factor needed to draw the Bees level.

But it was Woking who had the chance to kill the game with 15 minutes left. Loza was found from the left, and his run saw him one on one with Azaze, but he dragged his left footed shot straight down the keeper’s throat.

Loza tested Azaze again minutes later, with his shot being turned around the post by the Barnet stopper. Sam Beard’s free kick diverted off a Woking player and could’ve gone anywhere, but luckily, the ball nestled into the arms of Craig Ross.

That would prove to be Barnet’s last chance to equalise. Brilliant work by substitute Inih Effiong found Loza, and this time he drove into the box and calmly slotted the ball past the dive of Azaze. The Jamaican and his teammates rushed towards the opposite goal to celebrate with the travelling Woking fans, and relief was felt through the away end, as the Cards looked set to take all three points back to Surrey.

There was still time for one more Barnet scare, as Beard’s shot took a deflection before hitting the crossbar, but full time came shortly after, with Woking registering their first away win since a 3-2 triumph at Weymouth in late November.

This was a performance full of grit and determination, and Ian Dyer will be delighted with the way that his players have responded in recent games, to pull Woking clear of the bottom 3 and back towards mid table safety. Fans and players celebrating at the final whistle together showed that the Cards are finally out of the barren spell that caused such frustration during a tough winter.

Man of the Match: Moussa Diarra was part of a defence that registered its third clean sheet in three games, whilst scoring a crucial goal, an impressive display alongside Tom Champion at the heart of defence.
Tags
Share Facebook Twitter Print