Woking hold off Weymouth to make it three straight wins 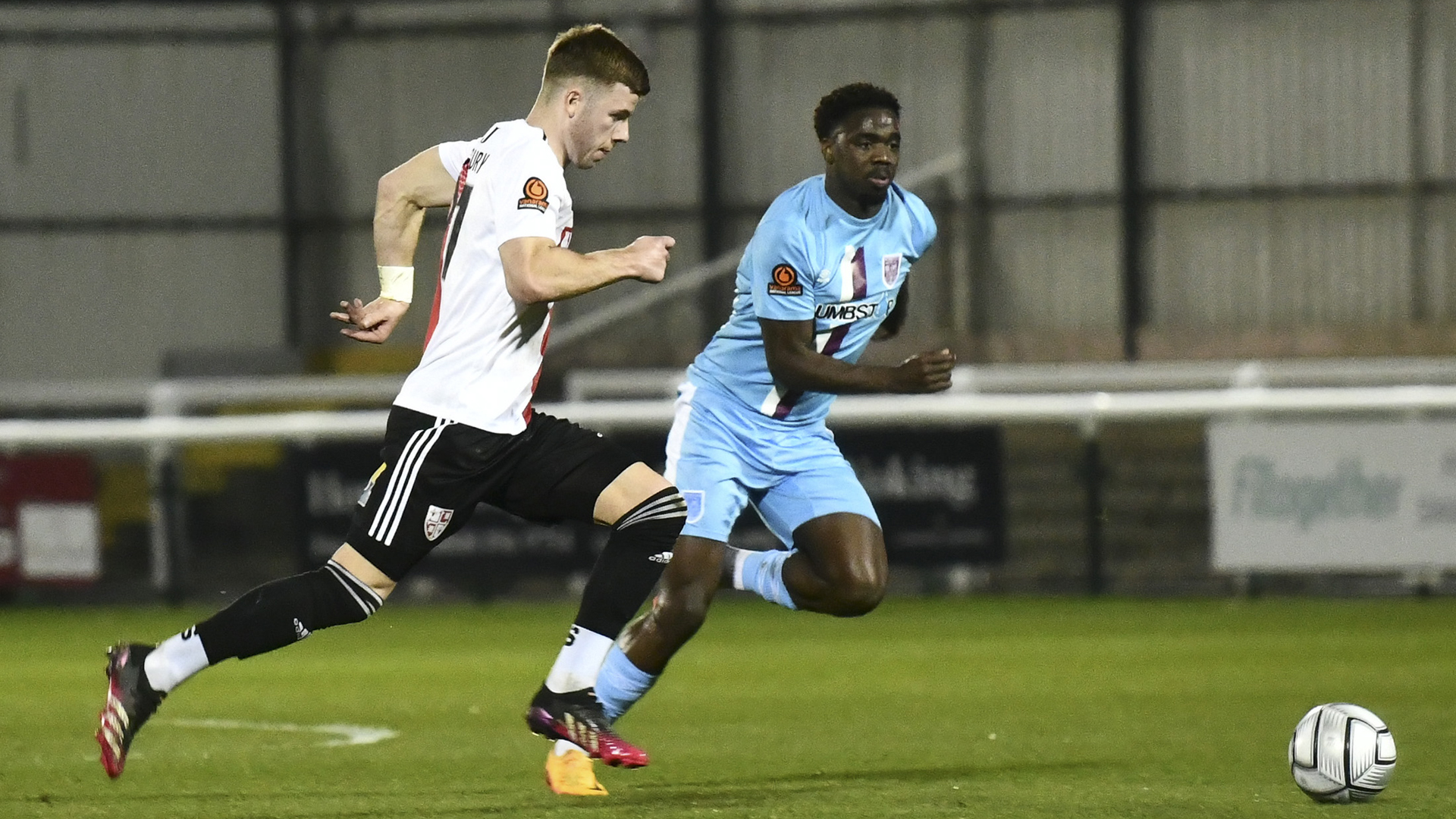 Woking maintained their strong form with a three consecutive league win thanks to goals from Tyreke Johnson and Max Kretzschmar to beat Weymouth, as both sides ended the game with 10 men.

Johnson gave the Cards the lead with a low strike on the 17th-minute, with Woking on top for large periods until the game boiled over in the second half with two red cards in four minutes.

Weymouth went down to 10 men first, with Tom Blair shown a straight red for an off-the-ball clash with Josh Casey in the 69th minute , only for Woking to lose David Longe-King after he picked up a second yellow card on the 73rd minute.

Woking saw off a late Weymouth rally to clinch the victory when Kretzschmar converted a 90th-minute penalty awarded after fellow substitute Inih Effiong was bundled over by Ben Morgan.

The win keeps Woking 14th in the Vanarama National League, given their nearest rivals also won on Tuesday night, and extends the gap to the relegation zone to a comfortable 21 points.

Ian Dyer made two changes to the starting line-up from the victory at Barnet last weekend, with goalscorer Jamar Loza coming in for Nicke Kabamba and Oliver Pendlebury replacing Max Kretzschmar to freshen up the attack.

After a low-key first 10 minutes, Woking had the best chance to open the scoring when George Oakley threaded a through ball to Johnson who unleashed a fierce drive which cannoned off the left-hand post.

That triggered an intense period of pressure by Woking on Weymouth’s defence, with Loza pulling off some wonderful skill to lose his markers but his cross wasn’t met by a Woking attacker.

But Woking made the pressure pay through Johnson’s first goal of the season. Casey’s cross found Oakley but his header was partially cleared by Weymouth, with Rohan Ince’s long-distance effort blocked which fell kindly to Johnson who composed himself to arrow the ball into the bottom-right corner. 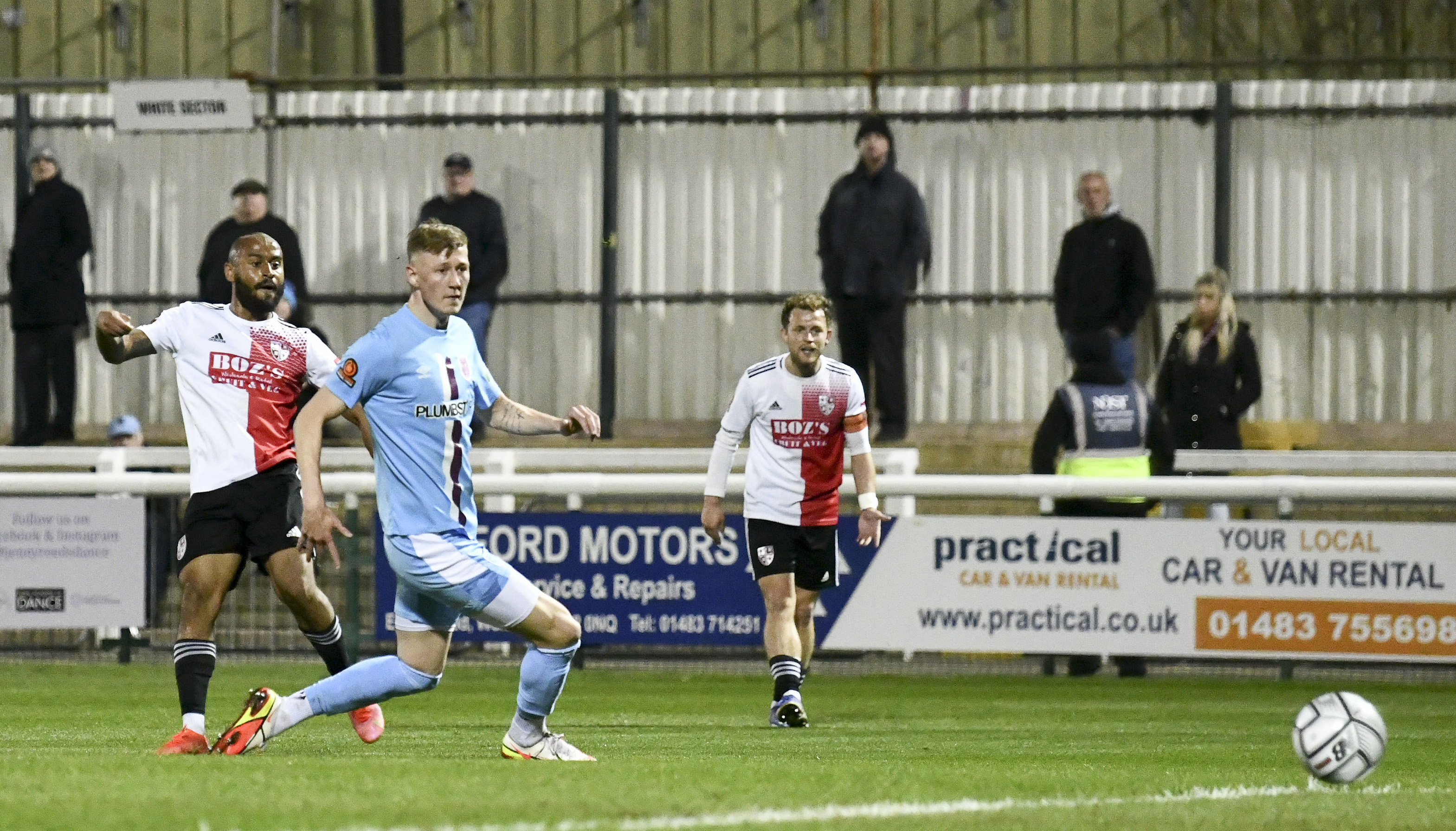 Tyreke Johnson beats the keeper to his left
David Holmes

The Cards continued to dominate after the opener, Oakley going inches away from a second Woking goal with a deft header from Solomon Nwabuokei’s cross from the right wing.

Coming off back-to-back league wins, Woking’s renewed confidence combined with a disciplined game plan allowed the Cards to keep a stranglehold of the game even when Weymouth showed glimpses of fightback.

Weymouth’s own frailty was also on show, having come into the game with three consecutive defeats, with a mix-up between goalkeeper Ross Fitzsimons defender Morgan which wasn’t punished by Woking’s forwards.

The Terras did show a growing threat towards the end of the first half, with Omar Mussa hitting a 25-yard strike that was excellently saved by Craig Ross. Moments after Fitzsimons made an equally impressive save, tipping away a fizzing effort from Pendlebury to keep the deficit to one at halftime.

The second half started to the KRE in fine voice but it was the visitors who went closest first, as a corner was thumped clear from the Woking goal line. The Terras continued to push for an equaliser, with Sean Shields seeing a low shot trickle wide of the right-hand post.

The game erupted midway through the second half with two red cards in the space of four minutes. Weymouth were the first team to go down to 10 men when Blair was dismissed for an off-the-ball clash with Casey that was seen by fourth official Stephen Hawkes who instructed referee Ryan Atkin to show the red card.

In the melee around the clash Woking’s David Longe-King was booked, which came back to haunt him as he picked up a second yellow card for a late challenge in the 73rd minute, to see the rest of the game play out 10 vs 10.

The dismissals initially gave Weymouth the impetus, with substitute Ben Thomson the catalyst for a series of decent chances for an equaliser. Starting with his cross after beating the offside trap which evaded the onrushing Weymouth attackers, Thomson then got on to the end of a Weymouth freekick but he ended up in the net and the ball went narrowly wide.

But with the game stretched in the closing minutes, Woking got their second goal which started from a Weymouth mistake as Mussa lost the ball on the edge of his penalty area to see substitute Inih Effiong latch on to a pass before he was tripped by Morgan.

Kretzschmar, Woking’s first substitute before the sending offs, stepped up to coolly fire down the middle for his 10th goal of the season.

The final nine minutes of additional time ended in chaos with Weymouth going all-out for a goal, leaving themselves exposed at the back which gave Woking multiple opportunities to grab a third. Effiong went closest having rounded the goalkeeper but an outstanding goal line clearance by Aaron Drewe denied him.

Woking host promotion hopefuls Solihull Moors this Saturday at the Laithwaite Community Stadium looking to make it four league wins in a row for the first time this season.

Attendance: 1826 – 71 travelling away supporters from Weymouth.

Man of the Match: Tom Champion – a rock in Woking’s defence and was also assured when reverting to right back late on.

Thank you to our Match Sponsor Lovetts Solictors and our Match Ball Sponsor The Family Network, West Surrey

You can check out Lovetts here

See what The Family Network can do for you here