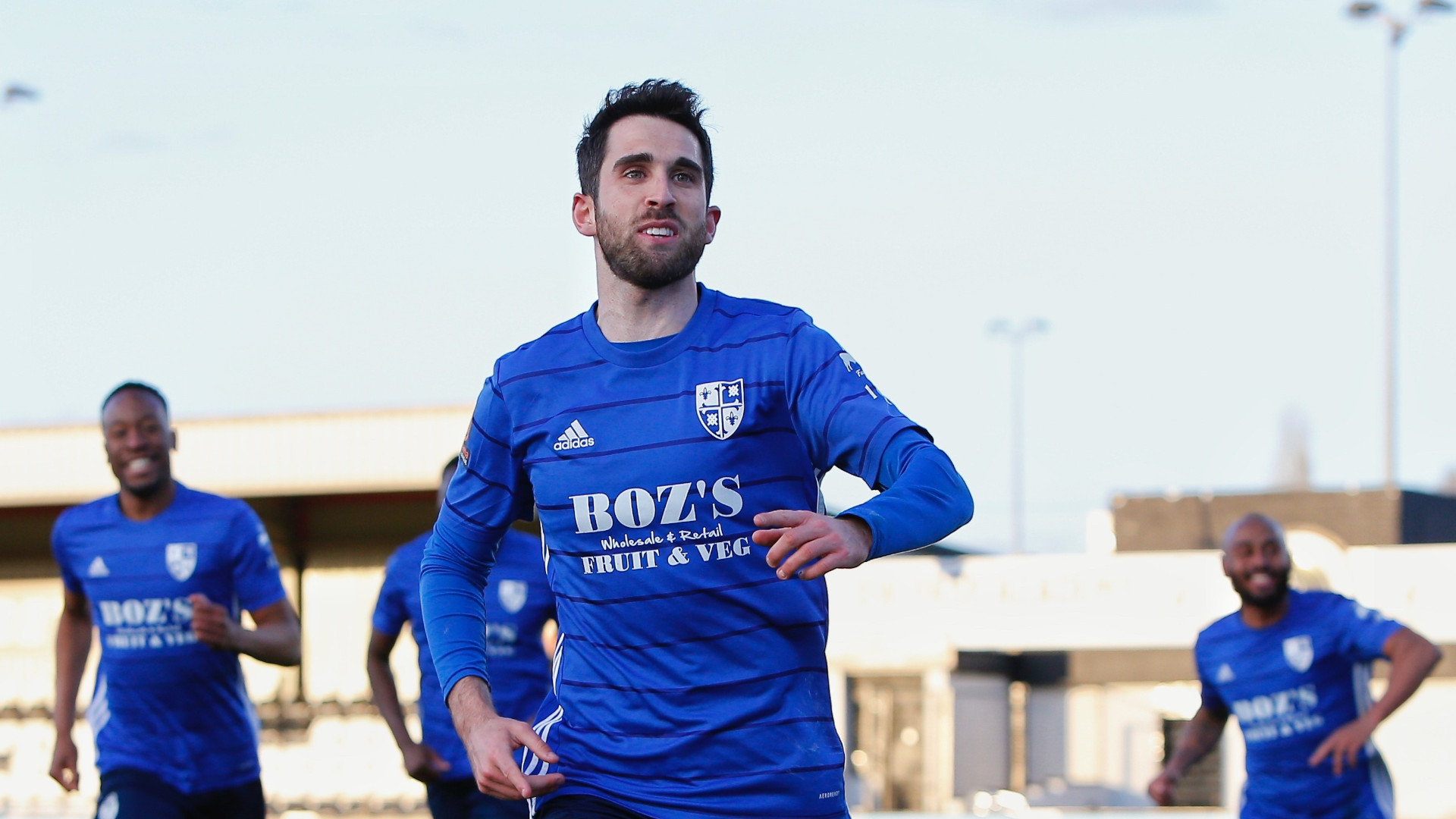 Darren Sarll’s first match in charge, in front of the BT Sport cameras, saw him achieve a dream start as the Cards inflicted a first home defeat of the season on a Wood side battling for a play-off place. It was a thoroughly deserved victory, made even sweeter by the fact that the winning goal was scored, from the penalty spot, in the 75th minute, by Max Kretzschmar, after the Cards had been reduced to ten men following Rohan Ince’s dismissal for two yellow cards.

On a bitterly cold afternoon – which saw a succession of sleet and snow flurries and bright sunshine – the Cards lined up with two changes from the side that had suffered a narrow defeat at the hands of Solihull Moors. David Longe-King, returning from suspension, came in for the injured Moussa Diarra, while Nicke Kabamba moved to the bench, replaced by George Oakley.

The Wood’s form had suffered in recent weeks, with only two points gained from their last five league games: a reaction, no doubt, to the end of their splendid FA Cup run, which saw them edged out at Everton. Mark Ricketts, such a great servant of the Wood as well as the Cards and the Fleet, was missing from the Wood team sheet.

Backed by a noisy away contingent, who’d made the journey in spite of the considerable attractions of viewing the game in the warmth of the Cardinals’ Bar, the Cards made sure, in the opening exchanges, that they more than matched the challenge represented by a physically strong home side. No quarter was given as both sides tackled fiercely, allowing no time on the ball.

Having asserted their right to compete, the Cards started, from about the quarter of an hour mark, to ask most of the questions. A free-kick glanced off the top of Longe-King’s head and Tom Champion headed a corner back into a dangerous area. Another corner was gained before Woking fashioned the best chance so far, with Kretzschmar’s low free-kick grazing the outside of the post. Another promising move, prompted by the impressive Ince, saw Inih Effiong put in a cross which was just too deep. The big striker then couldn’t then latch onto a loose ball in the box as defenders blocked his sight on goal. With Champion in particular nullifying any Wood threat on the Woking area, the Cards continued to do most of the attacking. A mazy run by Tyreke Johnson led to a Josh Casey cross and more pressure. David Stephens was very lucky to escape a booking after a blatant professional foul on Johnson. The referee rightly let Woking play on but failed to take Stephens’ name once the move had broken down.

As half-time approached the home side began to put a few passes together but the only effort on goal was a weak volley from Raymond which caused Craig Ross no problems.

The second half started with an attacking flourish from the Wood, with Tyrone Marsh winning a corner. But this proved to be a misleading omen since it was the Cards who proceeded to dominate what now became a more open game. A fine move, which included a well-judged ball down the channel from the resolute Longe-King, ended with a terrific strike from Johnson which flew narrowly wide. Another promising move ended disappointingly as Solomon Nwabuokei misplaced a crucial pass.

More Woking pressure followed as Longe-King and Kretzschmar combined well again; Effiong won a corner, and Kretzschmar saw his deflected low strike saved. Ross had to punch clear before Woking surged forward again. Johnson drove into the area but then laid the ball back to no-one. Oakley then suddenly found himself bearing down on the Wood goal, with Effiong to his left, but his ambitious effort was off target. Oakley had an even better chance a few minutes later, when he misplaced a glancing header. Kretzschmar was then in a whisker of beating the Wood keeper to a Longe-King cross. Effiong saw a shot blocked before blazing high and wide.

The game suddenly took on a different hue in the 68th minute when the referee brandished a second yellow card at Ince, who had lunged into a tackle. The Wood sought to capitalise immediately as some nervous defending allowed Scott Boden to head narrowly over. But, with Kabamba now on for Oakley, the Cards steadied themselves. A few minutes later an attacking move saw Nwabuokei, in the box, execute a clever reverse flick to Johnson, whose whose feet were too quick for Will Evans, who brought him down. The ever-reliable Kretzschmar stepped up and hit a superb penalty into the top corner to give the Cards the lead.

Inevitably, the Wood tried to throw everything at Woking during the time remaining, which included an added six minutes. The best chance fell to substitute and ex-Card Dennon Lewis, who volleyed just over the bar after Ross had missed his punch. Another scare occurred when Ross half-punched onto an attacker’s head, with the ball flying out for a goal kick. But the Cards’ defence stood firm, as it had all afternoon, and in added time substitute Jamar Loza almost got on the end of an Effiong flick, just being beaten to the ball by the Wood keeper.

As the final whistle blew, the win – and, perhaps more importantly, the tremendously determined performance – was celebrated enthusiastically by the management team, players and Woking fans. It could hardly have been a much better start to Darren Sarll’s reign.

My MOTM: In a magnificent all-round team performance, the vote narrowly goes to Tom Champion: such great positioning and coolness at the back.
Tags
Share Facebook Twitter Print