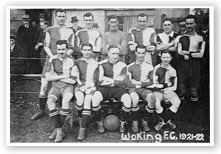 Woking Football Club, known as the Cards (from the Cardinal red of the red and white halves), was formed in 1887. The Club joined the West Surrey League in 1895/96, winning the title by one point on the final day of the season. However, within 21 years of being formed, the Club was in danger of folding for financial reasons. The turning point came when, in January 1908, Woking played Bolton Wanderers in the First Round of the FA Cup, having battled through five qualifying rounds. Despite losing the away game 5-0, the Club made it into the national press. Bolton Wanderers, impressed by the minnows they had defeated, travelled to Woking for a friendly match the following season, which kept the Club solvent. 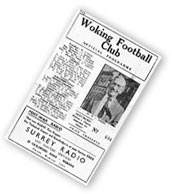 In 1911 the Club joined the Isthmian League, maintaining their place in the top division for 72 years and finishing as runners-up to Wycombe Wanderers in 1956/57. That achievement was eclipsed the following season when, in front of a 71,000 crowd, the Cards beat Ilford 3-0 in the last FA Amateur Cup Final to be televised live. Sadly, the Club then went into decline, culminating in a first-ever relegation in 1982/83. By the end of the 1984/85 season the Club had plunged to Division Two South of the Isthmian League. It was during that season that former player, Geoff Chapple, was appointed as manager. Although he was not able to save the Club from relegation, the renaissance was underway. Just missing out on promotion at the first attempt, the Club clinched the Division Two South title in 1986/87 and, after two third place finishes in Division One, they were promoted back to the Premier Division at the end of the 1989/90 season. 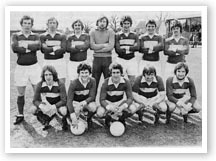 The next season saw the Club become part of FA Cup folklore. Entering the competition at the Fourth Qualifying Round, they beat three Conference sides to set up a Third Round tie away to West Bromwich Albion. Recovering from being a goal behind, Woking triumphed 4-2, thanks to a superb team effort and a never-to-be-forgotten hat-trick from Tim Buzaglo. To be drawn out of the hat with a home game against Everton was beyond everyone’s wildest dreams. The tie was switched to Goodison Park and, against a team packed with internationals, the sides were separated only by a solitary Kevin Sheedy goal. Over 34,000 people remained in the ground to give the players a rapturous standing ovation.

Promotion to the Conference and FA Trophy success

Promotion to the Conference was achieved in 1991/92. The Isthmian League title was clinched in early April, with seven games still to be played. Nearest rivals, Enfield, had been swept aside 5-0 in a scintillating display of flowing, attacking football and the season ended with the Club 18 points clear of the Londoners.

The new season kicked off with very few of the all-conquering championship side in the line-up. After a shaky start a very respectable eighth place finish was achieved. The following summer saw Chapple make one of the most inspired signings in the history of the Club. Clive Walker, the former Chelsea, Sunderland, Fulham and QPR winger, was signed from Brighton & Hove Albion and he was to prove the catalyst in the most successful period in the Club’s history. The FA Trophy was won in 1994, 1995 and 1997 and the Cards also achieved five successive top five finishes in the Conference, including being runners-up in 1994/95 and 1995/96.

The Club also continued to enjoy fine FA Cup runs. Barnet were defeated in successive seasons. In 1996/97 the Cards beat Millwall, then top of Division Two, and Cambridge United, who were challenging for promotion from Division Three. The Third Round draw paired the club with Coventry City. The game was closely fought, with the Premiership outfit 1-0 ahead with only seconds remaining at their Highfield Road ground. Then Steve Thompson struck to earn a replay. Although Coventry City ran out 2-1 winners at Kingfield, courtesy of a cruel own-goal, many people felt that Woking had more than held their own.

At the end of the 1996/97 campaign, having just clinched the FA Trophy for the third time, Geoff Chapple and his coach, Colin Lippiatt, left the Club and joined Kingstonian. John McGovern, the former Derby County, Nottingham Forest and Leeds United midfielder, was appointed. Hopes were high that he would lead Woking into the League but, although the Club finished in third place, his style of play and his personality did little to endear him to the fans. A poor start to the 1998/99 campaign led to his dismissal. Brian McDermott, the former Arsenal player, joined Woking on a non-contract basis and achieved a temporary upturn in fortunes, guiding the team to a ninth place finish.

However, the Club struggled again in 1999/00 and McDermott was relieved of his duties in March 2000. Colin Lippiatt returned and secured a 14th place finish. The 2000/01 season saw yet another poor start. The signing on loan of Chris Sharpling proved crucial in enabling the Cards to pull clear and achieve another 14th place finish. The team struggled once more in the 2001/02 season. Defeat in the FA Cup, by Newport County, saw Colin Lippiatt stand down and become the number two at the Club, with a certain Mr Geoff Chapple back as manager.

Hopes that the duo could restore Woking’s status at the top of the non-League game proved sadly unfounded. Colin Lippiatt departed in January 2002 and Glenn Cockerill, the former Southampton midfielder, joined as Chapple’s assistant. The season ended with the Club just one place above the relegation places.

In the meantime very significant events had taken place off the field. The downturn in the Club’s fortunes had led to a financial crisis. With the Club facing administration or worse, successful businessman and long-time fan, Chris Ingram, came to the rescue, becoming Chairman in February 2002. He continues, as Chairman of the holding company, to try to secure its long-term financial stability through redevelopment of the ground.

The 2002/03 season saw the Club get off to its best-ever start in the Conference. However, ‘black September’ brought seven consecutive defeats and a rapid descent into the relegation zone. Geoff Chapple resigned and Glenn Cockerill took over as manager, initially on a temporary basis. After an incredible sequence of results – winning and losing alternate games in a run of 12 matches and then embarking on nine consecutive draws – it all turned on the last day of the season. Woking went into the final game second from bottom, knowing that even a win over Telford would not guarantee their Conference status for 2003/04. However, a convincing 3-0 win for the Cards, plus victories by arch rivals Stevenage Borough, at home to Southport, and Farnborough Town, away to Nuneaton Borough, ensured relegation for those two defeated clubs and a massive sigh of relief around Kingfield.

The Club went full-time in the summer of 2003. The fans’ hopes were borne out by a much better season, with the Cards achieving a ninth place finish, having been on the fringe of the play-off places until the last few weeks. Again, only a poor finish the following season deprived the Cards of a play-off place, but a final placing of 8th with 68 points was the best achievement since 1997/98. Disappointingly, the Cards failed to mount a challenge for a play-off place in 2005/06, finishing in 11th place. But they made the most of favourable draws in the FA Trophy, reaching the Final at Upton Park, only to lose 2-0 to Grays Athletic. 2006/07 was another season of underachieving and, despite bringing in fresh faces during the January transfer window, Glenn Cockerill was unable to turn around a poor run of results and left Kingfield at the end of March, with relegation a distinct threat. Graham Baker and Club Captain Neil Smith took over for the final six games and steered the Cards to a safe 15th place.

The reprieve proved only temporary, with the following two seasons producing more disappointment, culminating in the Cards’ relegation in summer 2009 from the BSP after 17 years in the top flight of non-League football. In summer 2008 Frank Gray and Gerry Murphy assembled a young squad but the Board became disillusioned with the style of play and apparent lack of ambition and they left the Club by mutual consent shortly before the season ended, with the Cards finishing in 17th place. The appointment in May 2008, of Kim Grant, the former Charlton striker and Ghanaian international, as Head Coach, with Phil Gilchrist as his Assistant, proved disastrous. A poor start to the season led to Grant’s contract being terminated after only seven games, with Gilchrist taking temporary charge. Gilchrist was confirmed as Manager shortly afterwards but, while he steadied the ship, the Club still found itself facing relegation with six games to go. Graham Baker was appointed caretaker manager but, with other clubs making the best of their games in hand, he was unable to lift the Club above fourth from bottom.

Baker was confirmed as Manager just before the season ended and set about building a new side to compete in the Blue Square South, with Jimmy Dack as his assistant. A storming end to the 2009-10 season saw the Cards clinch 5th place. Dover Athletic were beaten in the play-off semi-final but the Cards lost to Bath City in the final.

The Club went part-time in summer 2010, with Baker and Dack both being awarded new two-year contracts. But, in spite of good runs in the FA Cup and the FA Trophy, both decided to leave the Club in January 2011.

Garry Hill guides club back to the Conference Premier

Garry Hill, joined by Steve Thompson as First Team Coach, took over the reins. A dramatic upturn in league fortunes took the Club into 5th place, but the Cards lost to Farnborough in the play-off semi-final.

The revival continued apace in the 2011-12 season, with the Cards reaching the top spot in late September and staying there throughout the campaign in spite of being pushed hard by Dartford. The BSBS title was won by nine points, with only five games lost all season.

The Cards finished in a comfortable 12th place in their first season back in the Conference Premier, playing an entertaining brand of football, and did even better the following season, ending in 9th place after showing great form in the second half of the campaign. The 2014-15 campaign saw the Club finish in a commendable 7th spot, missing a play-off place by only three points. Garry Hill maintained his record of top-half finishes the following season as the side ended in 12th position. But the summer of 2016 saw the loss of some experienced players and the side struggled throughout the 2016-17 season, eventually averting relegation thanks to generally improved form from the new year onwards, finishing in 18th place.

In May 2017, following an announcement that new investment would take place in the Club, Anthony Limbrick was appointed manager, with Jason Goodliffe joining him as assistant manager shortly afterwards. The team got off to a good start, and had a great run in The FA Cup where they reached the 2nd Round, defeating League One side Bury 3-0 away in a 1st Round Replay. Following the sale of Joe Ward to Peterborough United and Inih Effiong to Ross County the team started to slide down the table. In an effort to stop the slide, Limbrick departed in April and Goodliffe took over with Matt Gray as his assistant. Unfortunately they were unable to turn things around and Woking slipped into the relegation places on the last day of the season.

Alan Dowson, with his assistants Ian Dyer and Martin Tyler, joined ahead of the start of the 2018/19 season. The club had another great run in The FA Cup which included a defeat at home to Premier League side Watford in the 3rd Round in-front of a sell out crowd at The Laithwaite Community Stadium. Woking earned promotion back to the National League via the play-offs, defeating Welling United at home in the final.