10:53am, Tue 20th Oct 2009
Woking Football Club are pleased to announce they are signing up with Smokefree Utd. This virtual club will provide coaching and support to help football fans and players to stop smoking .The Surrey Stop Smoking Team will be at our game against Braintree on 31st October 2009 . They will be on hand in the clubroom before and after the game to offer advice and take your CO readings. If you are serious about quitting please make sure you pay them a visit.


This virtual club will provide coaching and support to help football fans and players stop smoking. People will receive motivational emails from Wright as well as prizes like the chance to play a game on their team's pitch.

A new survey to help promote the website found that 41% of male smokers play football and 82% of those are worried about the effects smoking has on their performance and want to stop.

More than half (56%) said their smoking affects the team's overall performance,

73% cannot keep going for the full 90 minutes and 75% say non-smokers have better endurance on the pitch than they do.

Almost half (46%) notice they feel more unfit or wheeze within the first 10 minutes of the game, the survey of players in England found. Just one week after quitting, smokers are able to extend the amount of time they can exercise for, other research has shown.

Barnes said: "I'd urge all football fans and players who have thought about quitting to sign for Smokefree United. Quitting smoking will have a huge impact on your game and you'll immediately become more competitive because your cardiovascular fitness will improve, increasing the amount of time you'll be able to spend on the pitch."

Public health minister Gillian Merron said: "Stopping smoking is one of the most important steps you can take to improve your game, your fitness and overall health. Quitting smoking is tough, but by joining Smokefree United you'll get the motivation and support you need to stop for
Sign up today by going to https://smokefree.nhs.uk/united/kick-the-habit/sign-up and lets push Woking up the league of non smoking clubs ! 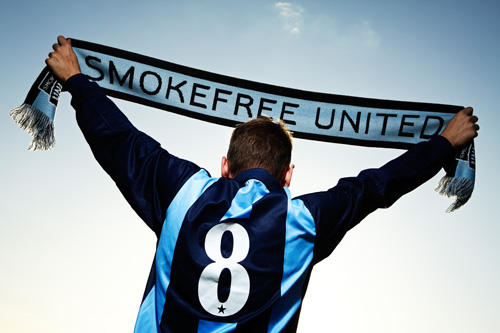