Having seen off Folkestone Invicta in last month's third round qualifier, Woking hosted Maidstone United in the first round 'proper' of the Buildbase FA Trophy in miserable, harsh weather conditions at the Laithwaite Community Stadium. Despite having Ollie Muldoon sent off late in the first half, the National League Premier visitors took the lead in the second against the run of play through Sean Shields, but almost immediately, Toby Edser restored parity for the Cards, forcing a replay at the Gallagher Stadium on Tuesday night. Let's hope the weather is a bit better by then.

Dowse made three changes to the side that won a week ago at Weston-Super-Mare. With Jamal Loza unable to feature against his parent club, and Armani Little returning to his, Dowse gave debut's to striker Noel Leighton and winger Aaron Eyoma, both brought in this week on loan from Dagenham & Redbridge and Derby County respectively. The other change in personnel saw Paul Hodges come in and Jake Hyde drop to the bench.

Woking kicked off facing the Leslie Gosden Stand, the skies above looking bleak, the rain persistent, the wind unbearably icy. Chances of a repeat in the â€˜spiritâ€™ of the memorable 4-4 league encounter between the sides earlier this year looked rather optimistic as both teams operated at a steady pace throughout the half, the conditions obviously playing their part.

It ultimately led to a balanced first half, not much between the sides and not much in the way of goal mouth action. Inside the opening 10 minutes, Jack Cook forced the first save from former Card Ross Worner, hooking an effort from the edge of the box, forcing a catch just below the crossbar. Both sides came close around the twenty minute mark, Jake Cassidy cutting in from the left and firing an effort past the far post for Maidstone, prior to Toby Edser doing really well to get a shot off from the edge of the box, in tight proximity to the ball and the defender, he produced a half volley straight down the goalkeeper.

Around the half hour mark, striker Elliot Romain, cutting a frustrated lone figure, came into the game for Maidstone with a header well blocked by Gerring in close proximity, and then wasted a good lay off from Jake Cassidy to blaze over from just outside the area. Christian Jolley and Toby Edser had been at the heart of most positive endeavour from the Cards, Jolley finding Hodges on a couple of occasions with tidy through balls including a delicate chip, the keeper just getting in ahead. Noel Leighton spurned the best chance of the half, a cross from the left by Edser headed by the front man ahead of the approaching Worner, but skirting off target and wide.

On 41 minutes the game turned to the Cards advantage as Ollie Muldoon received a second yellow card for a late tackle on Hodges on the attacking right. The midfielder had picked up the first caution of the game for a clumsy challenge on Jolley early on. The visitors ill-discipline continued a few minutes later as Dan Wishart picked up a caution in the same location, this time a poor challenge on Max Kretzschmar.

Eyoma had become increasingly involved for Woking as the half went on and made a couple of productive inroads down the left as half-time drew closer, the winger unfortunate not to profit from a deflection off of a Maidstone defender in the six yard box, saved by Worner.

Clearly looking to press home the numerical advantage from the outset, Woking began the second half upping the tempo, and with Maidstone resigned to being camped in their own half, the pattern of the second half quickly established itself. Paul Hodges began particularly effectively, making a couple of signature darts through the middle; Aaron Eyoma continued his endeavour alongside Josh Casey, the skipper stepping up his attacking game down the left. He had been caught in a challenge which went unpunished and was down for a couple of minutes, but following treatment thankfully carried on okay thereafter.

The increasingly sodden turf was playing its part in proceedings, standing water beginning to emerge, and this was no better illustrated than for Noel Leighton, having done brilliantly to nick it past his man with a nutmeg approaching the attacking third, his subsequent through ball effort just couldn't generate enough pace.

To freshen things up, Dowse replaced Eyoma with Nicky Wheeler in the 60th minute. He got straight into the thick of play, getting a couple of crosses off from the byline, but save for a pair of Edser efforts from Casey crosses and a Kretzschmar free kick on target, Woking had not really tested the goalkeeper enough despite having the majority of play.

They were unfortunately punished in the 71st minute, a long hoof upfield was not dealt with by Gerring who was on the stretch and slipping on the surface, allowing Sean Shields a clear run at goal, and he comfortably tucked it past Craig Ross, to the delight of the away contingent in the top corner of the stand. 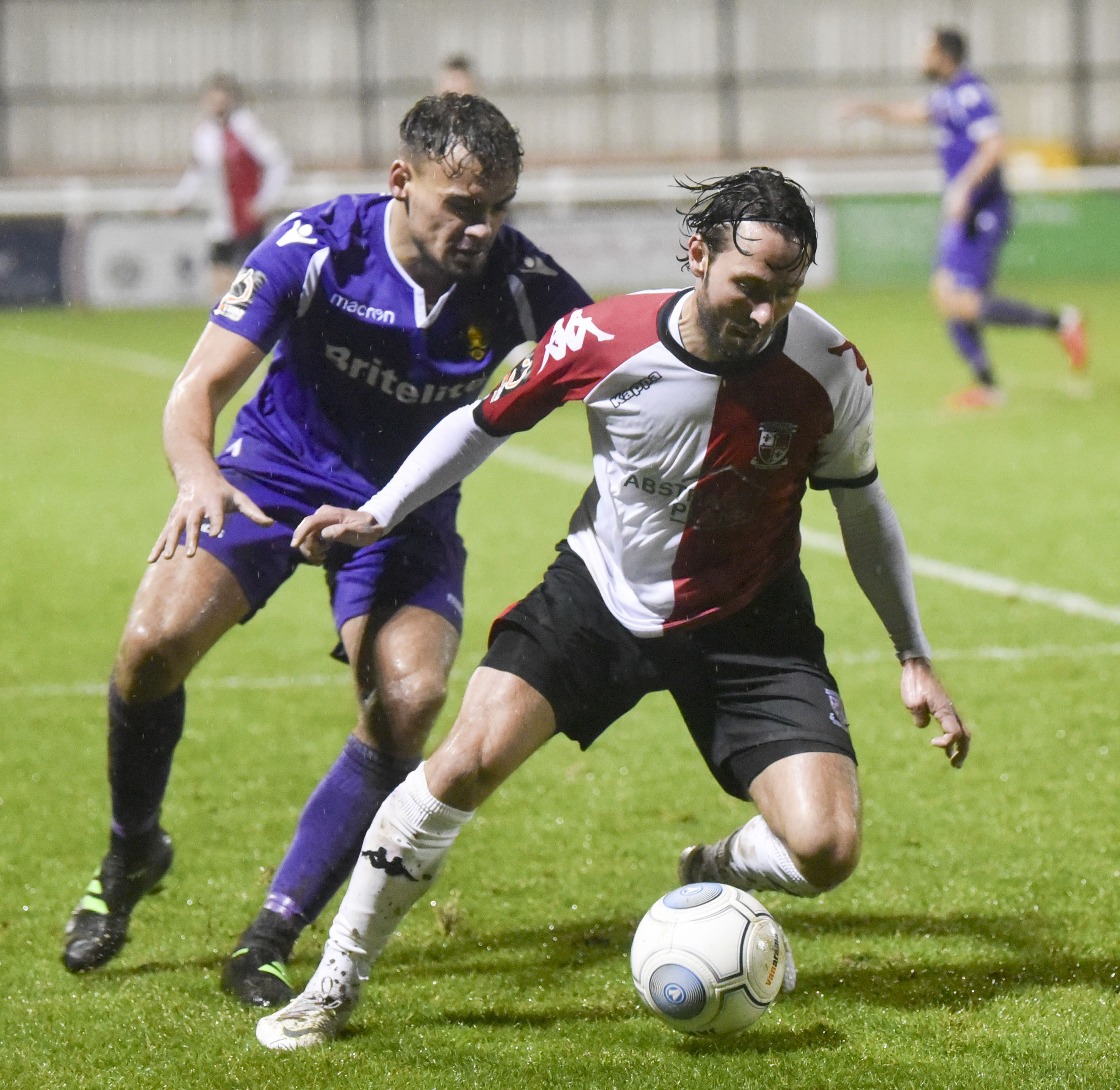 The Card's found a response a minute later, a Max Kretzschmar direct free kick forced a good diving save from Worner, the resulting ball back into the area was not cleared and through the melee, Toby Edser lashed home.

Dowse introduced Jake Hyde and Greg Luer for Leighton and Hodges respectively inside the final quarter of an hour. Woking kept searching for a winner but were just not getting close enough. Wheeler did really well to beat two men and keep the ball in on the touchline, but eventually lost control, and moments later he found a final ball for Hyde whose front-post flick was comfortably saved. Edser had a couple more efforts, including doing well to work a shot from the edge of the area, but missed probably the best chance of the second period right at the death. After a scramble it suddenly opened up on the right side of the area for the midfielder, but his resulting effort could only find the side netting.

Against higher level opposition, in adverse conditions, Dowse can take heart from a spirited display, but will obviously rue not putting the tie to bed in the second half given how the game ultimately panned out. Solid displays from the debutants, alongside strong displays again from Edser and Jolley in the heart of the midfield will encourage the management during this time of further squad adjustment, and if the Cards can show the same spirit and character again Tuesday night, hopefully that will be enough to see them through to the second round.

Man of the Match: Toby Edser. Once again the man looking to make things happen on the ball, demonstrated a tireless work ethic and got the crucial goal, and could and should have added to that.