Magic Cards pull fantastic win out of the Hatters

A Jake Hyde double helped Woking to a convincing victory away to Stockport on a day that saw the Cards pick up their first win since the 31st August.

On their first visit to Edgeley Park in almost three years- a 4-2 FA Cup first round win on Bonfire Night in 2016- Woking were clinical in front of goal, with Jake Hyde picking up his 8th and 9th goals of the season either side of a Dave Tarpey cross-cum-shot. This was the perfect response to the home defeat by Notts County on Tuesday night and ends a frustrating thirteen-game winless run.

There was just one change for Woking from the side who started that heavy loss, with Shaun Donnellan preferred to Mark Shelton. Craig Ross and Josh Casey continued their records of starting every game this season, at the third largest stadium in the division - smaller only than Notts Countyâ€™s Meadow Lane and Halifax Townâ€™s â€˜The Shayâ€™. As the 3,888 fans took their seats, with 94 making the 416 miles round-trip from Woking, the blustery conditions suggested this was going to be a hard-fought afternoon if either side wanted to come away with a win.

Within two minutes Jamar Loza worked the ball well down the left, but his cross was forced inches over Dave Tarpeyâ€™s head by Hinchcliffe in the Stockport goal. After that the game fell into a pattern where the ball spent longer in the air than on the ground, hardly surprising given the bogged down nature of the pitch caused by the ever-increasing rain. The home side found themselves down the right through full-back Sam Minihan - now in his fourth season with Stockport - who found Elliot Osbourne with a low cross but having done well to get it out of his feet, the number ten blasted a shot high and wide of the Woking goal.

The Cards failed to respond to this danger and just three minutes later they conceded the greatest chance Stockport would have in the first forty-five minutes. A routine long ball down the left flank went undealt with by Woking, allowing Devante Rodney- brought in on loan from Salford last month- to make a run into the box. Cutting inside a well-recovered Ben Gerring, the 21-year-old could only hit his shot into the side-netting from no more than eight yards.

If Osbourneâ€™s shot over the bar didnâ€™t bring a response from Woking, Rodneyâ€™s opportunity certainly did. A quickly taken 23rd minute corner went short to Loza, the on-loan Chelmsford City forward playing a delightful cross into a crowded area. Moussa Diarra rose highest- hardly surprising at 6ft 4â€�- the French defender seeing his header well saved by Hinchcliffe before the ball fell to Jake Hyde, who blasted his shot into the roof of the net for a Woking opener.

Now full of confidence having taken the lead, the Cards kept working the Stockport defence, with Tarpey cutting inside from the right and eventually finding himself facing the goal 20 yards out, but his rasping shot was parried well away from danger by Hinchcliffe- the former AFC Fylde keeper whose 60-yard wonder goal won the clubâ€™s 2013 Goal of the Season award.

With the sound of fireworks coming from outside Edgeley Park, tempers flared shortly before half-time, Kane Ferdinandâ€™s late tackle seeing him lucky not to enter the refereeâ€™s book. Following that, Stockport created just one more chance in the first half, a quick counter from a Woking corner saw Osbourne again only managing to find the side-netting. With only one-minute added, the Cards went in at half-time holding a one goal advantage.

Having surrendered two leads past the ninety minute-mark in the last month, Woking knew that they still had plenty to do if they wanted to keep up with the sides above them in their push for a play-off place.

Stockport got the game back running; this time shooting towards the 5,044 capacity Cheadle End, hoping to find a way back into a game which would maintain their four-game unbeaten run in the National League. As in the first half, the home side started the brighter of the two sides but good defending from the Cards saw the storm weathered without even a half-chance conceded.

In the 54th minute, Glen Rea became the only player to enter referee Steve Copelandâ€™s book for a challenge that, while he appeared to win the ball, was from behind. Merseyside-born Copeland - officiating just his fifth National League game of the season - had a quiet afternoon from then on, with both sides being well disciplined.

Shortly after Reaâ€™s booking, Stockport substitute Mulhern forced Diarra into a good interception from a low cross. The resulting corner was swung in by Tom Walker, with County centre-back Ash Palmer heading dangerously across the face of goal before Walkerâ€™s shot from a tight angle was hit into the side netting. The Cardâ€™s got another let-off just a few minutes later when Osborne- a constant thorn in Wokingâ€™s side- picked out an excellent low ball into the box but no County players were in the box to meet it.

As the hour-mark passed, Woking took the game to Stockport, Hyde forcing a good double save from Hinchcliffe before Donnellan went down chasing the loose ball. The half-hearted appeals for a Woking penalty were correctly not heard, but it was a sign of things to come as the Cards produced one the finest ten-minute spells of their season.

In the 71st minute, some good passing in an ever-more open midfield saw Tarpey in space on the right-hand side. Advancing to just shy of the corner of the penalty area, the 30-year-old picked out a dazzling ball into the area which beat everyone, including an advancing Jake Hyde, to hit the back post and nestle in the opposite corner. After a brief conversation with the linesman for a potentially offside Hyde, the goal was given. 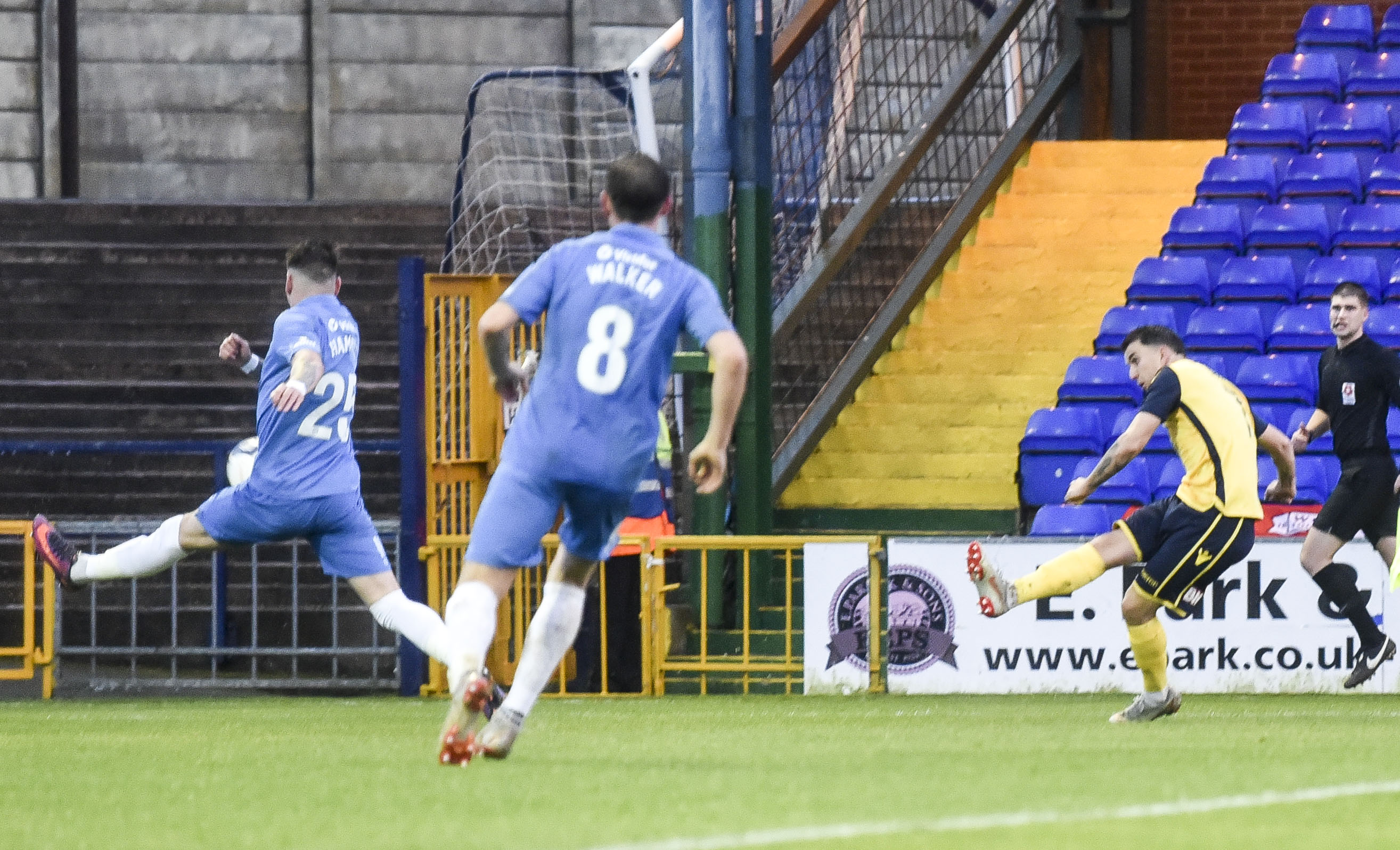 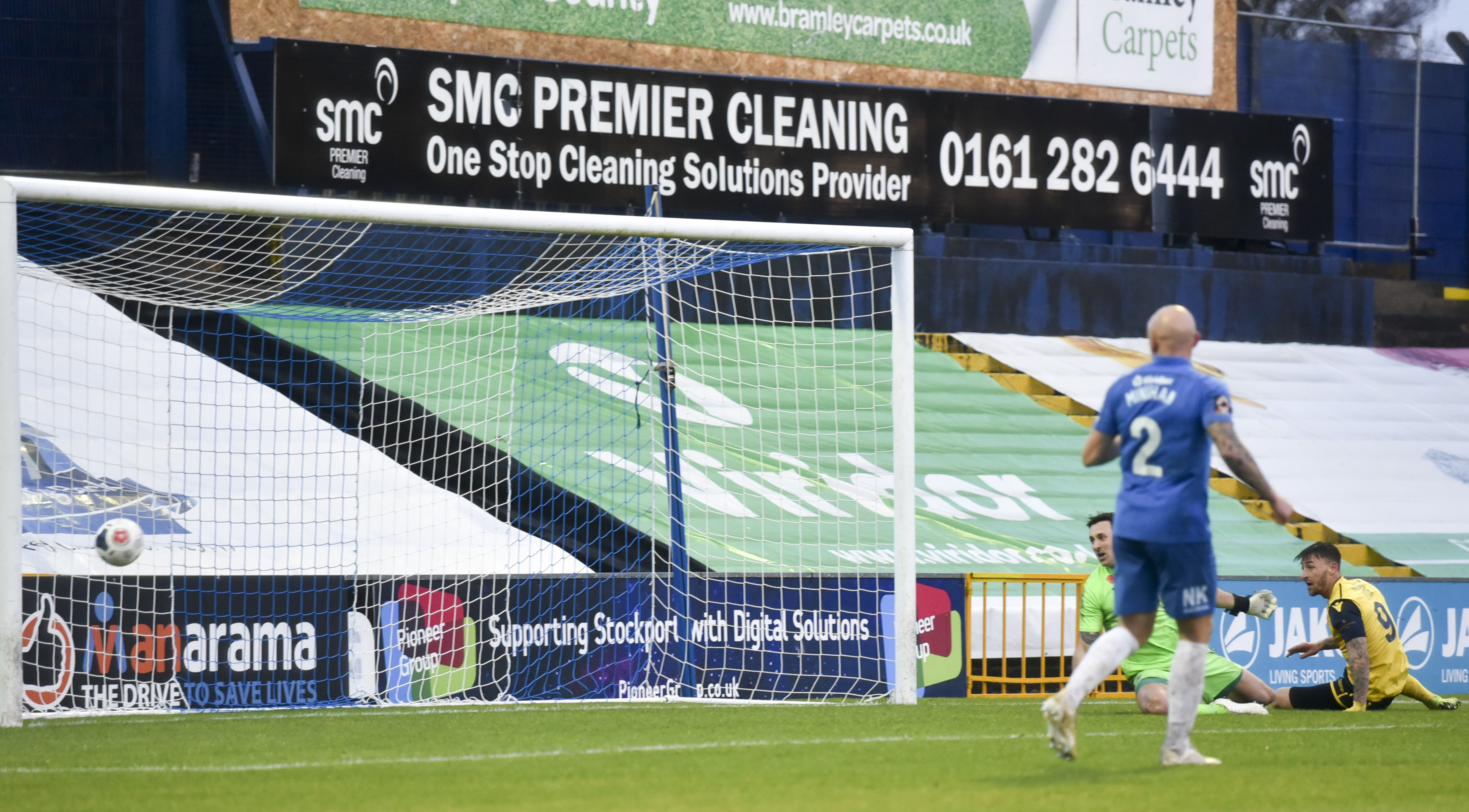 If there was some debate surrounding whether Hyde got a touch on Tarpeyâ€™s cross-cum-shot, the third goal was unequivocally the Woking top goal scorerâ€™s. Just eight minutes after the second, the ball began to get bogged down by the now saturated pitch. This worked to Lozaâ€™s advantage, battling with Minihan down the left in order to cut inside and produce a cross of real quality. With his back to goal and a Stockport defender fighting for the ball, Hyde met the cross with a startling backwards header that dipped over Hinchcliffe and sent the travelling supporters into ecstasy.

With the win now assured, Woking sensed a famous away victory. Tarpeyâ€™s long free kick into the area was met again by Hyde, whoâ€™s bullet header was saved brilliantly by Hinchcliffe high to his right.

Chasing a first clean sheet since their 2-0 home win to Solihull Moors on August 24th, the Cards were content to stay deep and defend, an 85th minute corner leading to a shot from substitute Hammill being excellently blocked by Diarra. Just a minute later however, Wokingâ€™s defence was breached when an interception by Casey from a low cross cannoned back off the post, falling perfectly for Mulhern to tap into the Woking net with Diarra and Gerring attempting to block on the line.

As the fourth official signalled there would be four minutes added, Stockport advanced again hoping to find the most remarkable of come backs. It wasnâ€™t to be however, as a foul wide on the left by Ferdinand led to a long stoppage with the Woking midfielder coming off worse. Having taken the momentum away from Stockport, the eventual free kick was headed a way wide by Palmer and out for a goal kick.

One late chance did fall to Rodney, a pass forward beating the Woking defence, but it was just not to be the former Hartlepool strikerâ€™s day, curling his shot wide of the left post from ten yards with Ross advancing. This proved to be the final opportunity for the home side and once the final whistle went it was clear to see what it meant to the Cardsâ€™ players, staff and supporters to be back to winning ways.

This desperately needed and richly deserved victory moves Woking level on points with Notts County and keeps them 8th, outside the play-offs merely on goal difference. For Stockport, the defeat keeps them in 17th, but in a showing of how tight the National League is so far this season, they are now six points off both the relegation zone and the play-off spots.

Next up for Woking is a tricky home National League game against Halifax Town, but this win can only bring confidence on what could prove to be a season-defining day for the Cards. A special mention must be made to the fans who made the journey up despite there not being a supporterâ€™s coach, who out sang Stockport for a large proportion of the match.

Man of the Match: Moussa Diarra, was a titan at the back throughout the game and played a role in the first goal - an all-round fantastic performance from the Frenchman.
Tags
Share Facebook Twitter Print