A goal from substitute Kyle Hudlin condemned Woking to a club record equalling 10th straight defeat on an overcast May afternoon in the West Midlands. In what must be a rare example of Woking playing a league match deep into May on FA Cup final day, the Cards showed a spirited fightback in this behind closed doors fixture at Damson Park against a Solihull Moors side boasting an impressive home record.

Hudlin's strike came in the 83rd minute, breaking through a couple of despairing attempted challenges from Jack Cook to slot home a right-foot strike into the bottom right hand corner of stand-in keeper Mark Smith's net. The timing of the strike, just 4 minutes after the Cards' had equalised following Adam Rooney's early opener, was a real hammer blow to a side for whom confidence is understandably brittle and losing has become a habit.

Woking will be left to reflect on two pivotal moments, a missed first half penalty from Charlie Cooper, back in his native West Midlands, and the defensive slip that allowed Hudlin to net what proved to be the winner.

Woking had found a variety of ways to lose in the previous losing sequence; with defeats attributable to a range of factors including profligate finishing, lacklustre defending, injuries, suspensions and unavailable players, and, on occasion, downright bad luck. This latest result ended up proving something of a microcosm of how fortunes have fared for the Cards since the clocks went forward at the end of April.

Alan Dowson made two changes from the starting line up that went down to spirited defeat on Tuesday at league leaders Sutton; Mark Smith taking the place of Craig Ross in the visitors goal for his 4th appearance of the season, and Joe Leslie being rewarded with a start after his impressive goalscoring cameo at Gander Green Lane, with Paul Hodges dropping to the bench.

Smith was protected by a starting back four of Kyran Lofthouse, Ben Gerring (who captained the side in the absence of Josh Casey and Ross), Jack Cook and Leo Hamblin. Leslie started on the left-hand side of Cooper and Nathan Collier in the centre of midfield, with Malachi Napa providing forward thrust on the right. Young AFC Wimbledon loanee Zach Robinson linked up with Sam Ashford in attack.

Woking would have been desperate to start the game well and not be forced to chase the match, as has been too often the case in recent weeks. Heads understandably dropped, both on the field and in the dugout, when the hosts took the lead in the 5th minute. Fine work down the right-hand side from the impressive Alex Addai resulted in the sort of low cross that Adam Rooney has made a career out of getting on the end of; the ball hitting the back of the net via the legs of Mark Smith.

To their credit, Woking picked themselves up and grew into the match, the lively trio of Robinson, Leslie and Napa all seeking to combine and move the Cards upfield. This pressing further up the field paid off when Ashford intercepted a wayward pass from Williams, played a smart through ball to Robinson who burst into the area only to be the meat in a Solihull sandwich, bundled over in the box leading the referee Mr Dicicco to point to the spot.

For the third time in a week, Cooper stepped up from 12 yards and unlike previous successes against Chesterfield and Sutton shot tamely to Ryan Boot's left, the home keeper reading the direction well and making a smart, but all too comfortable save. Midway through the first half the Cards were left reflecting on whether this miss would prove costly.

Solihull spent the remainder of the half looking the more composed and accomplished side, but the visitors stuck gamely to their task and dealt well with the threat posed by the hosts, especially from set pieces, a factor of play which has been an achilles heel for Woking of late. Woking nerves were tested when Callum Maycock played in Justin Donawa who finished smartly past Smith, however the referees assistant finally intervened with a late flag for offside. There was a late scare in first half stoppage time as well when James Ball's freekick struck the top of the Woking crossbar.

Woking emerged unchanged at half time, as did the hosts, and it has to be assumed that the message from Dowson would have been to stay in in the game, continue to do the basics well and seek to push for an equaliser.

The opening exchanges of the second period saw Woking play with some degree of attacking intent, the lively Robinson having an appeal for a penalty waved away after Hamblin's long ball was taken down superbly by Napa to feed in the striker. At the other end, Moors were kept at arm's length in the main by an improved defensive foundation marshalled by Gerring, although Woking were guilty of a series of needless fouls in their defensive third which put them under pressure.

Around the hour mark, Leslie showed good trickery on the left and appeared to be fouled in the box; the official determined that no penalty should be given to the astonishment of the Woking bench. After 62 minutes, Woking had a chance when a long goal kick bounced kindly to the ever-willing Ashford, who, at full stretch, managed to divert the shot towards goal. The home keeper was alert and off his line quickly and managed to make the save.

Woking were starting to mount some sustained pressure, and almost scored from a corner after 67 minutes when the ball broke to Gerring who could only volley into the crowd of players between him and the hosts goal. Moors then replaced their goalscorer Rooney with the new threat in the giant frame of Hudlin, as they sought to arrest the Woking charge. Dowson made a couple of changes of his own, Sam Dalby replacing Robinson and Paul Hodges seeking to influence the game in the place of Napa.

Hodges, looking to get on the ball on the half turn and run at the home defence, did so effectively after 76 minutes when he ghosted into the right hand side of the penalty box and sent a low cross agonisingly past the boot of Ashford, who threw himself towards the ball to no avail.

The other replacement, Dalby, also linked up well with Ashford, winning a corner from which the Cards deservedly drew level. An in-swinging corner from Cooper was bravely met by Collier, who diverted the ball past Boot to the delight of players and coaching staff. Collier, at 36 years old the elder statesman in this young Cards side and a loyal lieutenant for Dowson since he became one of the managers first signings three years ago, richly deserved his first goal for the club. The reaction from the other Cards players indicated just how popular the identity of the goalscorer was. 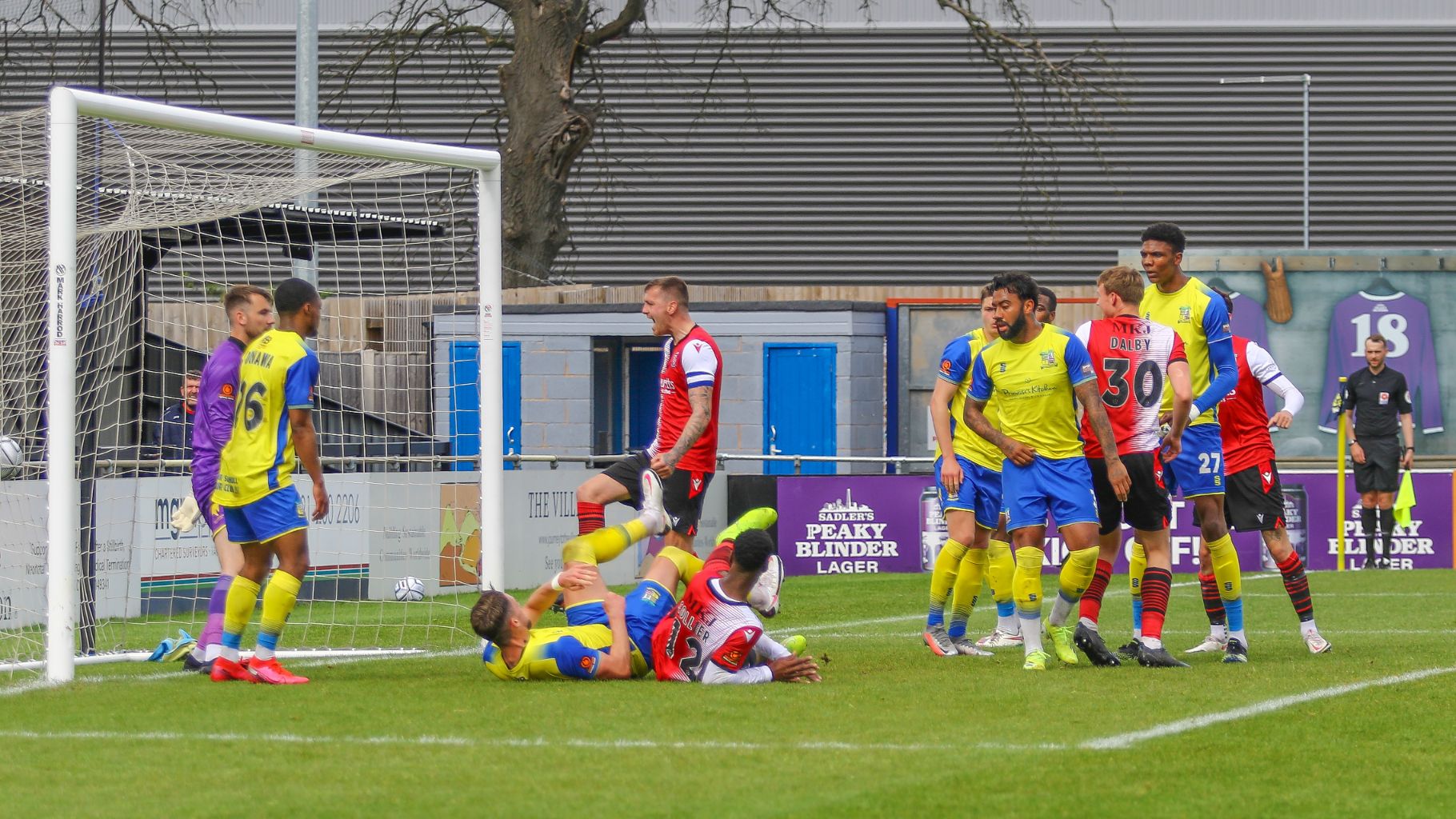 Two minutes later the Cards thought they had taken the lead when Ashford brilliantly got on the end of a long pass from Cooper and smashed past Boot. On this occasion the assistant's flag was raised promptly.

With the Cards then on top, heartbreak was to follow when Hudlin punished Cook's slip with his goal, leaving Woking players visibly crestfallen. Rather than giving up, the visitors did press for a second equaliser. Cooper, determined to atone for the penalty miss, was hugely industrious and sought to drive the team forward and assume responsibility. The final chance came from a deep Cooper free kick that Gerring did brilliantly to keep alive, finding Leslie, who, rather wastefully, shot wide of Boot's near post rather than play the percentages by aiming across the goal to the far post.

The final whistle, following three minutes of stoppage time, was met with resignation by the Woking players, who had put a lot into this match and will be gutted to have emerged with nothing to show from a spirited, committed second half display, against a home side who are now unbeaten in eight at Damson Park. Two games remain - a difficult trip to Edgeley Park next up and then a long-awaited opportunity to play in front of their own fans at home to Wealdstone on the 29th May.

Man of the Match: Ben Gerring - The stand in captain has been playing through the pain barrier in recent weeks but today seemed more like his old self, displaying a commitment and leadership that stood out and contributed to a much improved set piece defensive display.