Hyde at the double as Cards roll on against Coasters

Woking capped off a memorable week with a third successive win on their travels, with a fine victory at Mill Farm taking them up to second place in the embryonic National League table.

A brace from substitute Jake Hyde ensured the Cards three points, no less than they deserved after another excellent display full of spirit, endeavour and, pleasingly, a real cutting edge.

Having started their campaign with two wins and two draws from their opening four fixtures, the Coasters would have come into this match with high hopes of asserting themselves against part-time opposition. The Cards, buoyed by the superb win in Derbyshire at Chesterfield on Tuesday night, have shown sides of revelling in their role of underdogs as they continue to adapt to life back in the top tier of non-league football; unsurprisingly, they named an unchanged team from the win over the Spireites.

Manager Alan Dowson demonstrated the tactical flexibility he has been preaching the importance of on Tuesday night, switching from a back four to a back three midway through the first half at the Proact stadium. Here, the Cards opted for a flat back four in front of Craig Ross, with Josh Casey and Jack Cook playing either side of Manny Parry and Ben Gerring as conventional full backs. Ahead of them, Shaun Donnellan and Kane Ferdinand looked to provide the midfield platform on which the more-attacking trio of Dave Tarpey, Toby Edser and Tyreke Johnson could link with Ibrahim Meite up front.

Woking started brightly in sunny but blustery conditions in Lancashire, forcing a couple of early corners as the visitors sought to gain an early foothold in the game. The playing surface, which looked excellent and was heavily watered before the match, was conducive to two sides keen to pass the ball through midfield. Indeed, the pre-match sprinklers not only played havoc with the flag-waving mascots, but caused a number of the Coasters players to misplace their footing in the opening exchanges.

With 18 minutes gone, Edser was upended on the edge of the box following some neat footwork which helped him evade his marker. The free kick was in a near-identical position to that from which Tarpey scored on Tuesday, and Cards fans held their breath to see if the former Barnet man could repeat the trick. Curling the ball over the wall, beyond the dive of James Montgomery in the Coasters goal, he did exactly that, a second superb free kick in consecutive matches for the forward. According to the matchday programme, Mill Farm has been a happy hunting ground for Tarpey. In 2017, he netted four goals for Maidenhead, and he added to the pain of the home fans with this fine strike.

Fylde struggled to create much in the way of clear-cut chances, Gerring and Parry effectively marshalling the prolific Danny Rowe, whose frustration at the lack of service from his team mates spilled over when he picked up a booking for a hack at Casey near the corner flag.

Woking doubled their lead on 38 minutes. Tarpey was fouled on the right hand side, halfway into the Coasters half. Captain Casey swung in the free kick, Wokingâ€™s players showed some excellent movement and the ball was met by a great leap from Ferdinand, whose firm header flew past Montgomery. 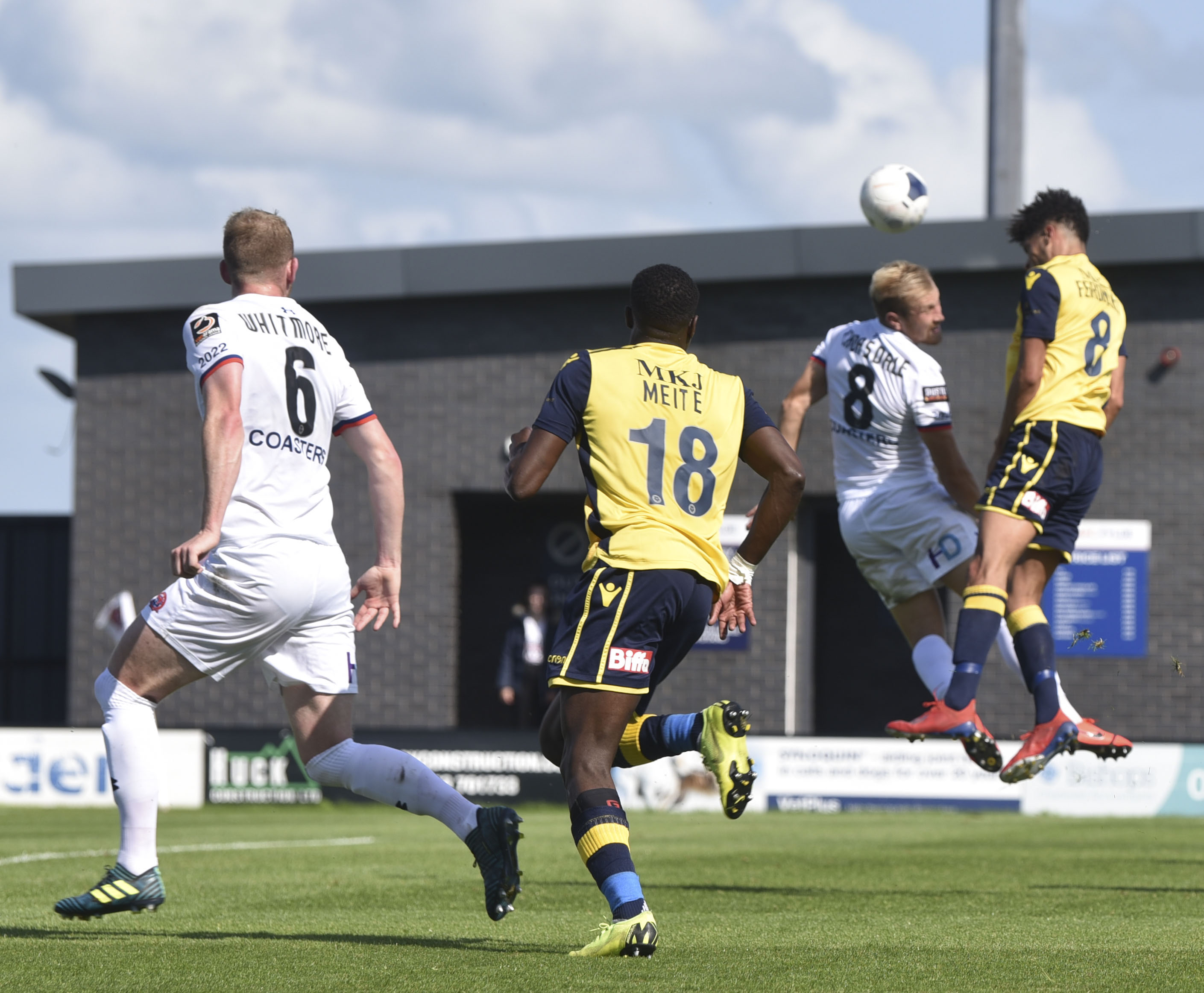 The second goal sparked the hosts into life before the interval, with the best move of the half for the Coasters coming in stoppage time. Nick Haughtonâ€™s low cross was met by Rowe but his effort was well blocked by the heel of Gerring. Danny Philliskirk then fired over from a great position following a smart one-two on the edge of the box.

Woking emerged unchanged at half time, as did the hosts, who, it could be assumed, had received a dressing down from manager Dave Challinor, given how lacklustre the first half was for the ambitious Coasters. The first effort of the half was from the Cards, Edser creating some space for himself at the edge of the box, but shooting straight at the keeper. Fylde got themselves back into the match when captain Lewis Montrose went down under a challenge from Ferdinand. The Cards midfielder reacted angrily at both the official and his opponent, and after consulting with his assistant, referee Thomas Parsons awarded both players a yellow card for their square up. The delay seemed to effect the concentration of the Cards defence, as the resulting free kick was headed home by Montrose, whose late run into the box was not picked up.

The home side were visibly lifted by the goal and after 57 minutes almost grabbed an equaliser. Matty Kosylo picked up the ball around 35 yards from goal, ran through a number of Woking challenges and fired his cross/shot just inches wide of the post. Woking finally had a storm that they needed to weather, and, to their credit, did so effectively, without panic, keeping calm and organised and seeking to play the game in the opponents half whenever possible. Johnson provided an excellent outlet on the left hand side, his pace causing problems for the home right back on a couple of occasions. Behind him, Donnellan and Ferdinand sought to wrestle control of the midfield, using the ball well and rarely wasting possession. Dowson shuffled his pack by removing the willing Meite and replacing him with Hyde.

Woking should have added to their lead after 67 minutes. Ferdinand made a near post run to superbly flick on Edserâ€™s corner, which was somehow missed by Gerring at the far post, who completely missed the ball. Any sort of contact from the big centre half would surely have found the net.

On 70 minutes, Casey was fouled by Ryan Croasdale in a nasty-looking challenge midway in the Woking half, earning a deserved yellow card. Croasdale compounded this four minutes later when he upended Tarpey, earning a second booking and a red card. With 79 minutes gone Paul Hodges replaced Tarpey wide on the right, looking to threaten with his pace and trickery.

The Cards made the most of the man advantage, keeping possession well, stretching the play with Johnson and Hodges offering genuine width on either flank. This positive approach paid off on 83 minutes when a driving run from Casey fed Johnson, who played a perfectly weighted cross onto the head of Hyde, who made no mistake from close range, sending the travelling fans into ecstasy on the terrace behind the goal.

Woking were not finished yet, and a minute later Toby Edser drove into the box from the right hand side, before being bought down, the referee responding to the appeals by visiting players and fans by pointing to the penalty spot. With Max Kretzschmar and Dave Tarpey not on the pitch, there was no question that anyone other than Hyde would take the penalty, and the striker bagged his second of the game, sending Montgomery the wrong way and sliding the ball calmly to the keeperâ€™s right, to ensure all three points for the Cards.

Edser was replaced late on by Godfrey Poku, the on-loan Forest man again impressing as he had against Chesterfield. His presence in the midfield has added some craft and composure into the side, and this excellent display was acknowledged by the travelling support.

After five minutes of stoppage time the referee blew the whistle and the Cards players and coaching staff were able to celebrate with the travelling support, whose dedication and mileage this week has seen them rewarded with two fine performances and results.

AFC Fylde are an ambitious club who have set themselves a target of reaching the Football League by 2022. A banner at Mill Farm reads â€˜Stop Us If You Canâ€™, and Woking did just that with a fine result. Dowsonâ€™s side have won all three of their away matches this season, and on this evidence it is clear to see why. The core of the team, retained from last season, is well organised, disciplined, hard working and committed, and this core has been supplemented by new signings like Parry and Donnellan, as well as some exciting young loanees in the form of Johnson, Meite and Edser. Individuals appear to know their roles within the team unit and credit for this must go to Dowson and his staff.

After the match, Dowson was understandably keen to play down the long-term significance of such fine early-season form, but a return of 12 points from a possible 15, including a maximum haul away from home, has to be considered a start beyond the belief of even the most optimistic Woking fan.

Winning 4-1 away from home at any level is an eye-catching result, to achieve this as a newly promoted side against a club that reached the National League play off final and who won the FA Trophy in 2018/2019, really does justify excitement amongst all connected with the club. The Cards will look to take this form into their next home match, which is a mouth-watering second versus first clash against table-toppers Solihull Moors.

Man of the Match: Shaun Donnellan â€“ Notable mentions for Toby Edser and Kane Ferdinand alongside him in midfield, but this was an all-action display from Donnellan whose work-rate and assuredness in possession provided the Cards with a superb platform to win this match. With and without his now distinctive head bandage, Donnellan caught the eye with an excellent all round display.
Tags
Share Facebook Twitter Print