Comeback revenge for Stones against Cards as fans return

Finally, the day fans return to the Laithwaite Community Stadium (hopefully indefinitely) had come, and like any joyous occasion, the sunshine returned with them. The song building up to the game may have said â€œthe boys are back in townâ€�, but today the Woking fans would no doubt have been singing â€œthe fans are back in groundsâ€�, such was the good feeling amongst spectators.

Dowse stuck with the same starting line-up that faced Stockport last time out, with the only change to the bench being the return of Joe Leslie in place of Malachi Napa, whose spectacular bicycle kick in the FA Trophy at Sutton won the fansâ€™ goal of the season award. Prior to kick off, the squad received rapturous applause from the Woking fans at both ends of the ground, as many returned to see the Cards for the first time in over a year.

It was a good start from the Cards, applying a high press on a Wealdstone team who looked comfortable just to pass the ball amongst their defenders and not progress into the Woking half at all during the first five minutes. It was interesting to see the experienced Nathan Collier slot into the right side of a back 3, giving Lofthouse and youngster Hamblin the license to push on, which they did dutifully and effectively.

In the 7th minute, Woking nearly went in front, after a Kretzschmar cross was headed back into the six yard box by Leo Hamblin. The keeper looked to have flapped at the looping ball, but he was adjudged to have been impeded, sparing his blushes since the follow up had been rattled home by a Woking player. Minutes later, Ross made a fantastic save to deny Charlie Hughes following a powerful run from Lo-Everton, but the flag went up anyway.

A couple of good chances in quick succession came for the Cards in the 15th minute, as Gerringâ€™s flicked header from a Cook long throw was thwarted by the outstretched palm of the Wealdstone number one. From the resulting corner, the ball fell to Max Kretzschmar at the back post, but he failed to keep his half-volley from a narrow angle on target.

At long last, Woking took the lead in the 18th minute, albeit through an own goal. A teasing ball from Charlie Cooper was met just inside the box by Alex Dyer, and the keeper could only watch as the ball flew into the top left hand corner to the delight of the Kingfield Road End. A superb header â€“ just a shame for the Montserrat international that it was at the wrong end!

A period of Woking dominance followed, and Gerring thought he had doubled Wokingâ€™s lead in the 22nd minute, after he slid in to poke a loose ball into the back of the net, but the linesmanâ€™s flag was up. A couple more Cooper free kicks caused problems in the box, but Collier and Kretzschmar respectively were unable to work the keeper.

Despite this, Wealdstone made the score 1-1 in the 32nd minute, after Nathan Collier lost the ball leaving the defence in disarray, Hughes picked it up just outside the box, skipped past his man and rifled it into the back of the net. It was a tough blow for the Cards, who had been relatively comfortable for most of the game.

Two yellow cards came for Wealdstone in the 34th and 37th minutes for Harbottle and Mendy respectively, and from the first free kick Cooper nearly caught the keeper out with an effort at goal from a wide area, but the ball just ruffled the roof of the net. The last chances of the half came for Woking, with Cooper having a shot blocked after Robinson held onto a long pass from the Woking midfielder, and Ashford leaning back too much when the ball dropped to him in the area from a corner.

The referee seemed to need reminding that Christmas is a long way away, as he dished out yet another card, this time to Jack Cook just before half-time. The Woking man looked to have won the ball, but perhaps his trailing leg came through the back of his man.

An interesting change for Wealdstone came at half-time, with a switch of goalkeeper from Shelvey to Jake Askew; I can only assume it was to give him a run out, with it being the last game of the season.

The second half started very slowly, but all of a sudden the Woking fans were back on their feet. In the 50th minute, the outbound Ben Gerring rose highest in the six yard box to slam home a header, putting Woking back ahead. The goal prompted chants of â€œBen Gerring is magicâ€�, to which he responded with a raised hand in acknowledgment as he made his way back. 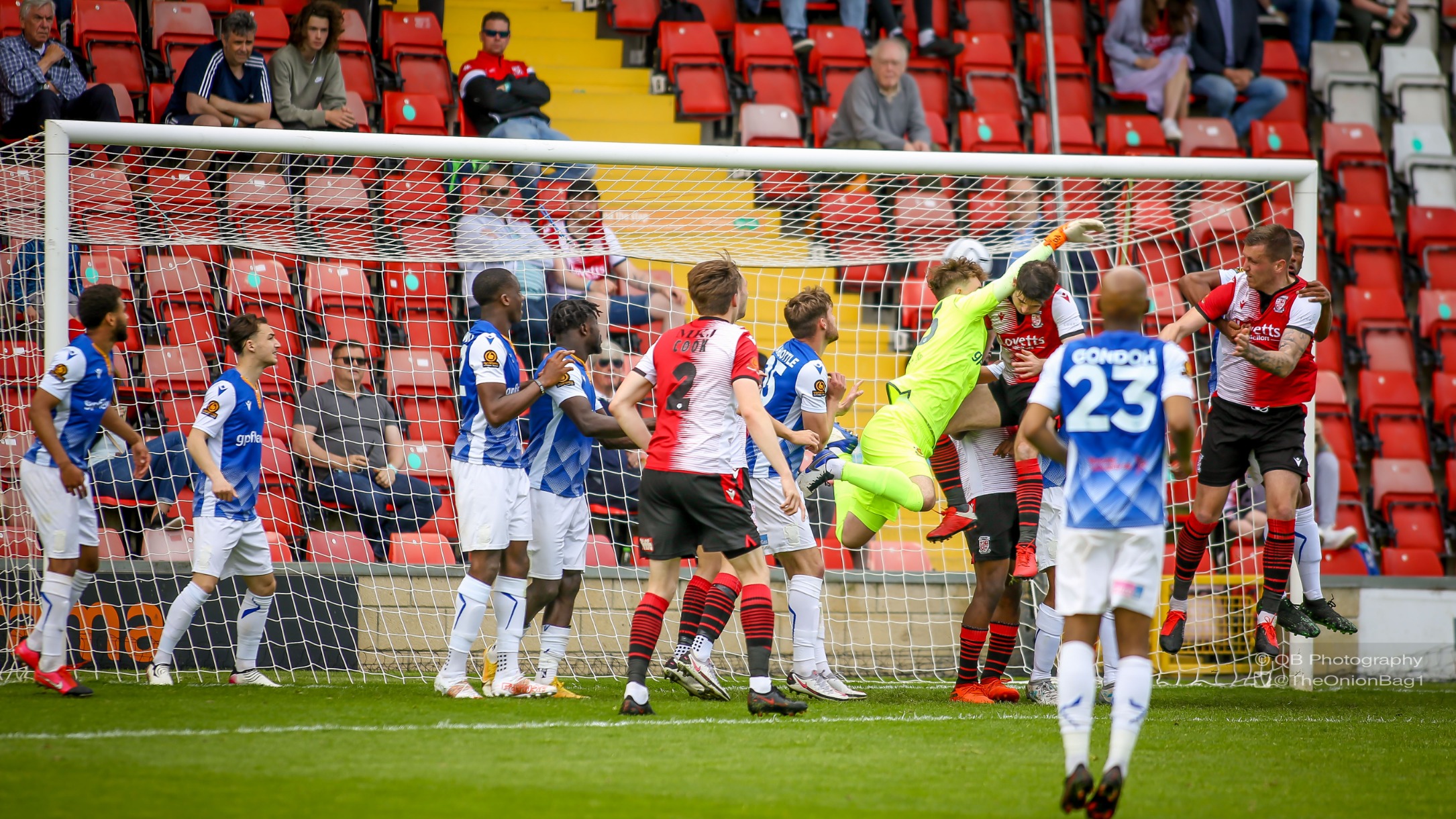 The next period of the game was fairly quiet, with neither keeper challenged as both sides attempted to create chances. In the 60th minute, a long ball over the top dropped just outside the Woking penalty area, and Ross bravely flies out to head clear. However, in doing so he received a swinging boot to the head from goal scorer Hughes, who himself was handed a booking for his troubles.

In the 67th minute, the game suddenly swung in Wealdstoneâ€™s favour, and with Cook being replaced by Hodges through injury minutes before, Gerring tripped his man in the box, and a penalty was given. Gondoh sent the keeper the wrong way, and slotted his penalty into the bottom right hand corner, to bring Wealdstone level once again.

Woking attempted to go back in front, with Kretzschmar heading over after a sharp turn of pace from Robinson allowed him to stand a cross up to the back post. Also, another Cooper free kick was turned wide of the post by Sam Ashford, who arguably would have benefitted from a worse connection with the ball.

Ross made a brilliant save at his near post in the 72nd minute, but the resulting corner was only cleared as far as the taker Gondoh, who jinked inside and curled a delightful finish into the bottom left hand corner. His second of the afternoon, and Wealdstone were in front for the first time. Woking will be disappointed that the clearance wasnâ€™t better, and that Gondoh wasnâ€™t closed down fast enough, but it was an excellent strike.

In the 76th minute, the Woking defence found themselves all over the place once again as Wealdstone broke forward, and Lo-Everton found himself in acres of space on the edge of the box just to shift the ball onto his right foot and fire past Ross, who couldnâ€™t get his foot across quick enough. 4-2.

Leslie came on following the goal, hoping to score to get Woking back in the game like he did against Sutton live on BT Sport a couple of weeks ago â€“ he replaced the lively Zach Robinson. In the 80th minute, Woking made their final change, bringing on Watford loanee Sam Dalby for John Freeman.

The Stones came very close to making it five (and extremely embarrassing for Woking) in the 81st minute, as Mendy cut inside to shoot, but was denied by Wokingâ€™s player of the season Craig Ross. Good defensive work at the other end by Kretzschmar opened up a chance for sub Leslie, but a good block put it behind for a corner, which led to nothing.

Sam Ashford never stopped running throughout the game, and did a fantastic job on the 89th minute mark to skip inside off the right wing, but his left footed effort was loose, and drifted high and wide of the target. It just really didnâ€™t feel like it was going to be his â€“ or Wokingâ€™s â€“ day.

Five minutes were added on for the Craig Ross clash and Cookâ€™s injury, but despite some lively play and a deflected shot from Joe Leslie, Wealdstone saw out the added time comfortably. As Woking struggled to get out of our own corner at one point, it was great to see Leo Hamblin turning his back and winning a free kick in true Josh Casey style in order to get out.

A disappointing end to an extremely difficult and abnormal season, Woking will be looking optimistically to next season, with a full-time regime, new deals for the management team, and already a couple of ambitious signings to delight a (hopefully) full stadium on the horizon.

Man of the Match: Charlie Cooper â€“ Two of his trademark set pieces led to Wokingâ€™s goals, he nearly scored from another himself, and played a number of pinpoint long balls over the top to make use of the pace of Robinson and Ashford up front.