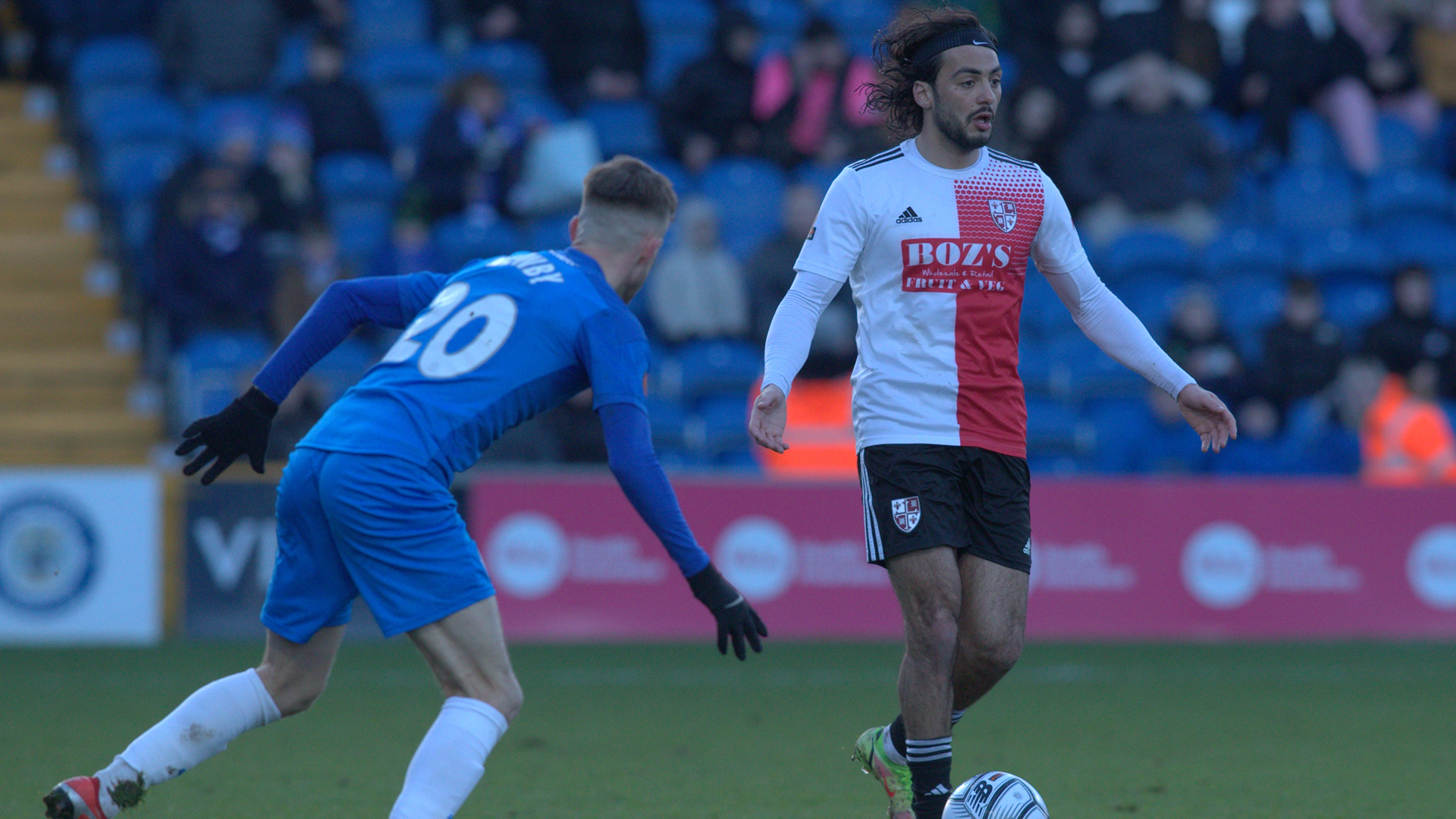 I don’t really want to go down the ‘game of two halves’ line here, but a Woking side that started so promisingly at Edgeley Park could ultimately have no complaints about this defeat to league leaders Stockport.

If we could have accepted a points decision at half time, there was evidence enough to suggest Alan Dowson’s side deserved at least a draw and arguably a victory. But worst fears regarding back end of games stats came to fruition, the fight seeming to desert the 15th-place visitors once the 10-man Hatters forged ahead in the final quarter.

And this resultant slim reverse extended Dave Challinor’s hosts’ unbeaten run in all competitions to 14 games while disappointingly ensuring the Cards’ first defeat on Hardcastle Road in five visits.
The hosts started as they meant to carry on, Moussa Diarra having to be on his guard at the back for Woking, top scorer Paddy Madden first to go close, heading over. But Tarryn Allarakhia showed promise for the visitors, dispossessing Scott Quigley at one end and soon at the heart of the Cards’ surges forward, Dowse’s underdogs showing no fear of higher-placed opposition.

Tom Champion won the visitors’ first corner with a deflected finish from the right of the area, but with County lines cleared, most of the early action remaining in Woking’s half. Diarra rose to head away a looping free kick, while Nicke Kabamba took a knock as he cleared the next attack, the ref subsequently lecturing Ryan Croasdale. Then Quigley put a ball across after being played in by Ryan Johnson, but there were no takers.

A day that earlier involved snow and high winds in the North West improved to the point that Craig Ross was soon shielding bright sunshine from his eyes as he became more involved, a pair of Winter Olympics snowboard-style goggles perhaps in order.

At the other end, Woking worked hard down the left, slowly making headway, but Jermaine Anderson’s final half-chance proved no problem for home keeper Ben Hinchcliffe, while Kyran Lofthouse - along with Ross the only Woking starter in the corresponding fixture here last May - put Inih Effiong away, the striker showing great poise as he shimmied left to lose both markers, but he seemed to lose his balance as he shot, his left-foot finish neatly tipped over in the best chance thus far, the resultant corner fruitless.

When Allarakhia was felled, Cards skipper Josh Casey’s delivery from the right, in line with the penalty spot, was punched away by the home keeper and eventually cleared. And while Allarakhia remained busy in the middle of the park, eager for openings, County largely had the measure of their opponents.

A foul on Casey followed, a free kick just inside Woking’s half finding Rohan Ince, but he couldn’t get a meaningful touch in the opposing penalty area. Meanwhile, from Rydel’s left-wing cross, Will Collar’s instinctive shot was stopped low by Ross in the hosts’ best chance yet.

As Woking countered, Effiong was away again but this time too casual, soon having plenty of County company. In response, Louie Annersley cleared the next home raid, while Ross tipped away another danger ball, the sun still in his eyes, with Annesley there again to see out a deep Johnson centre from the left, the next attack a seat of the pants affair for Woking, losing composure under pressure.

After Casey and Effiong combined on the left, Allarakhia won a corner, but Ash Palmer headed away Casey’s delivery. However, within a minute Woking had another left-wing corner, Allarakhia exchanging passes with Kabamba then finding Ince in the centre, who headed down and ran on, but could only find the side-netting with his shot.

Ross collected Quigley’s next dipping effort, while Liam Hogan blasted over before a Casey free kick at the other end caused problems, Kabamba winning another corner, Casey’s in-swinger punched away, no Cards players able to get a shot in, the away skipper booked just before the interval for a rash tackle on Macauley Southam-Hales, Ross punching away the free kick, Woking having done enough to at least ensure parity at the break and unlucky not to be ahead.

Lofthouse suggested we were in for more of the same as the match resumed, going on a marauding run, before a flashing header over by Collar from Madden’s cross as County countered, a first change following as Dowson replaced Anderson with Jack Roles, who soon proved key to the action.

Within five minutes of arriving, a foul on Roles led to a major melee, Collar in front of the referee and close to the benches with outstretched arms as tempers flared, Roles going down, both sets of players wading in, the officials taking a while to dissect what had gone on, yellows following for Roles and Collar before Hogan received a straight red, the home captain - showing his shirt number to the ref - seemingly perplexed, taking a while to leave.

But there’s something about Woking playing 10 men that seems to work against them, the increased noise from an impressive home turnout – having grown ever quieter in that tricky first half – now a factor too, serving to spur on the hosts.

Diarra again proved a cool customer, standing up to deny Madden, but ex-AFC Fylde and Hartlepool United boss Challinor’s double substitution saw the Hatters shift up the gears, replacements Elliot Newby and – particularly - Ollie Crankshaw soon stretching Woking, the latter’s runs on goal and down the right increasing noise levels all the more.

There were still counter-surges, Casey, Roles and Allarakhia combining on one wing, Allarakhia feeding Lofthouse on the right, shouts for handball ignored. But soon it was all County, Ross diving low to his left to palm away from Madden before Roles went in the book for a robust challenge, the baying home crowd calling for his departure, the official instead flashing a yellow.

From the next Crankshaw raid, Southam-Hales’ shot was weak, while Diarra did enough to keep County at bay as Crankshaw and Newby threatened to break through again, Ross getting down to thwart the next attack, Woking’s defence increasingly nervy.

Home pressure finally told on 72 minutes, Rydel’s deep right-wing corner – surprisingly their first and last - finding Palmer, who outjumped his marker from 10 yards and glanced a header towards the near post, Casey on the line only able to kick at air, Ross already beaten.

County truly had the measure of their tiring guests, and while Jamar Loza replaced Kabamba, he never got a look in. Ross punched out from Collar’s centre, while Hinchcliffe saved well from Roles after he was played in by Allarakhia, no one able to capitalise on Loza’s hopeful centre, time ebbing away, George Oakley replacing Effiong but also struggling to make an impact.

Thankfully, Crankshaw slipped when in on goal following a Cards mistake, the visitors having run out of ideas in response. Crankshaw again caused problems from a short corner, the ball somehow not finding the target. And when Loza won a corner, Roles’ left-wing delivery was too long and County were away again, Ross having to save from Crankshaw then Madden in short succession.

An additional seven minutes offered little in the way of hope, Woking no closer than Roles’ left-wing raid with no end product, Challinor’s side soon celebrating what turned out to be their six-point lead – second-place Chesterfield slipping up at home - while bringing about a fifth straight league defeat for Dowson’s downbeat outfit.

Star man: Craig Ross – on the balance of the first half, Tarryn Allarakhia gave hope for the future but tired as the game wore on, whereas Woking’s keeper proved a 97-minute performer, making some crucial stops when the Hatters finally found form, ultimately keeping the deficit down to one goal, a respectable outcome in the circumstances.
Tags
Share Facebook Twitter Print